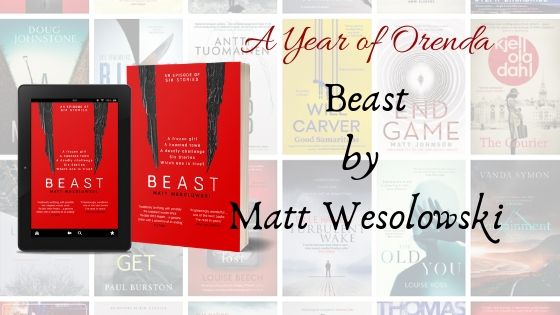 Surprise … Yep. Today you get two reviews for the price of one! Mandie loved the series so much she couldn’t wait to read it and what better day to share her thoughts than on blog tour day? In case you missed it, you can find my review here, but do read on for Mandie’s thoughts:

Elusive online journalist Scott King examines the chilling case of a young vlogger found frozen to death in the legendary local ‘vampire tower’, in another explosive episode of Six Stories…

In the wake of the ‘Beast from the East’ cold snap that ravaged the UK in 2018, a grisly discovery was made in a ruin on the Northumbrian coast. Twenty-four-year-old Vlogger, Elizabeth Barton, had been barricaded inside what locals refer to as ‘The Vampire Tower’, where she was later found frozen to death.

Three young men, part of an alleged ‘cult’, were convicted of this terrible crime, which they described as a ‘prank gone wrong’

However, in the small town of Ergarth, questions have been raised about the nature of Elizabeth Barton’s death and whether the three convicted youths were even responsible.

Elusive online journalist Scott King speaks to six witnesses – people who knew both the victim and the three killers – to peer beneath the surface of the case. He uncovers whispers of a shocking online craze that held the young of Ergarth in its thrall and drove them to escalate a series of pranks in the name of internet fame. He hears of an abattoir on the edge of town, which held more than simple slaughter behind its walls, the tragic and chilling legend of the ‘Ergarth Vampire…

Both a compulsive, taut and terrifying thriller, and a bleak and distressing look at modern society’s desperation for attention, Beast will unveil a darkness from which you may never return…

God knows how I have done it, but I have managed to get far enough into my reading to pounce on an Orenda book not long after it was published. And boy am I glad that I managed to read this one as I can happily say that I think it is my favourite one of the series. After all what’s not to love about a book that has a vampire myth at the heart of it?? Downside is that it’s the latest in the series so now I will have to wait for the next one.

In this instalment of six stories we see Scott King travel to Ergarth to look into the death of vlogger Elizabeth Barton who was killed after taking part in the Dead in Six Days Challenge, an online challenge where you had to complete six tasks over six days or you would meet a vampire and die. As with Hydra we know who committed the crime, what we don’t know is why. The answer to that question may surprise you.

After the revelation’s in Changeling, Scott King is no longer hiding his identity and meets with six different people that were either affected by Elizabeth’s death or knew her or her killers. On the surface Elizabeth was a well-liked person who was in the process of setting up a charity to help the homeless. The truth that was being uncovered however may not have been quite as rosy. With the “Beast from the East” myth running through the book, you do have to wonder if what people have witnessed is real or just their imaginations running wild late at night.

This book is so much more than myths and murder. With the world of vlogging and the need for everyone to post what they are doing (real or fake) in order to get likes exposed it shows just how people can hide their true personalities to the outside world. Online trolling and bullying are such a reality these days that there is just no escape. In writing Beast Matt Wesolowski highlights just how quickly things can turn to tragedy just because you want to be popular.

As I said at the beginning of this review I think that this is definitely my favourite so far but I am really looking forward to what Matt produces next as he certainly has a style that stands out and leaves the reader wanting more.

Matt Wesolowski is an author from Newcastle-Upon-Tyne in the UK. He is an English tutor for young people in care.

Wesolowski started his writing career in horror and was a winner of the Pitch Perfect competition at ‘Bloody Scotland’; Crime Writing Festival 2015. His subsequent debut crime novel ‘Six Stories’ was published by Orenda Books in the spring of 2016 with follow-up ‘Hydra’ published in the winter of 2017 and ‘Changeling’ in 2018.

‘Six Stories’ has been optioned by a major Hollywood studio and the third book in the series, ‘Changeling’ was longlisted for the Theakston Old Peculier Crime Novel of the Year, 2019 Amazon Publishing Readers’ Award for Best Thriller and Best Independent Voice.