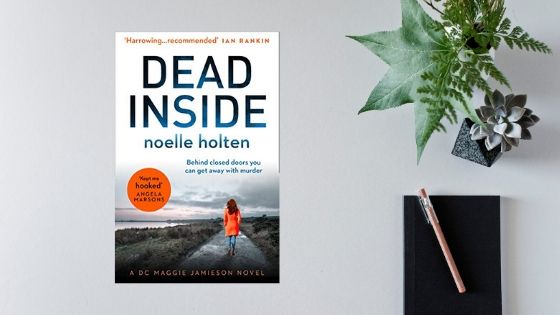 Today I hand back to Mandie who has a review of Dead Inside, the debut novel by Noelle Holten, and book one in the Maggie Jamieson series. If you’d like to hear my thoughts on the book, you can find my review here. Before we see what Mandie thought, here’s what the book is all about:

The killer is just getting started…

When three wife beaters are themselves found beaten to death, DC Maggie Jamieson knows she is facing her toughest case yet.

The police suspect that Probation Officer Lucy Sherwood – who is connected to all three victims – is hiding a dark secret. Then a fourth domestic abuser is brutally murdered.

And he is Lucy’s husband.

Now the police are running out of time, but can Maggie really believe her friend Lucy is a cold-blooded killer?

Dead Inside is the debut novel from Noelle Holton, and it’s a real cracker of a book. As soon as I started reading it, I was immediately drawn into the story and found that I just couldn’t put it down racing through it in a day. Drawing on her knowledge of the probation system, Noelle made the main character seem real and it also meant that she didn’t shy away from anything.

This is not your typical police procedural book as although the police are there, the focus really is on Lucy who works for the probation service. Usually the probation officer is a bit player in most books of this type, so it was a refreshing change to see the profession take centre stage and for the police to be the supporting cast. You have to feel for her as despite dealing with abuse victims and their abusers on a daily basis she is unable to extricate herself from her own domestic issues. As it starts to affect both her personal and professional life you do have to wonder where it will all end.

Her husband was totally unlikeable, but he is the master manipulator. To the outside world he is a really nice person yet behind closed doors only Lucy sees the reality but has become an expert at hiding it, to do anything else would make her feel weak. His only redeeming quality (such as it is) is his love for his children, but then again that could change as they got older.

As the book progresses and the links between some murders and Lucy herself become more apparent you do wonder if maybe she is taking her revenge on some of her nastier clients or if it really is just one really bad coincidence.  With an intriguing plot and complex and believable characters I look forward to what comes next from this exciting new author.

Noelle Holten is an award-winning blogger at http://www.crimebookjunkie.co.uk. She is the PR & Social Media Manager for Bookouture, a leading digital publisher in the UK, and was a regular reviewer on the Two Crime Writers and a Microphone podcast. Noelle worked as a Senior Probation Officer for eighteen years, covering a variety of cases including those involving serious domestic abuse. She has three Hons BA’s – Philosophy, Sociology (Crime & Deviance) and Community Justice – and a Masters in Criminology. Noelle’s hobbies include reading, author-stalking and sharing the book love via her blog.

Dead Inside is her debut novel with Killer Reads/Harper Collins UK and the start of a new series featuring DC Maggie Jamieson.

One thought on “Dead Inside by Noelle Holten”

My little #agathachristie stack. 😍
I’ve seen this about and been might curious so decided to treat myself. The Book Club by @cjcooper_author
Devoured this whilst sipping my Sunday morning cappuccino. The Reckoning by @rachelamphlett, part of her Case Files short story series. A fab story and kept me smiling. Out today.
Treated myself to this beauty to keep my hardback special editions up to date. Midsummer Mysteries by Agatha Christie.
I've had a pretty good July all things considered. Had a birthday, ate cake, discovered tropical cider which tastes like boozy lilt ... Also managed to read 18 books. Can't complain about that. Not my most prolific month but when the weather was so warm that all I wanted to do was sleep, I'm impressed I got that far.
Today Mandie shares her thoughts on The Lies I Tell by @ohthatjoelhames