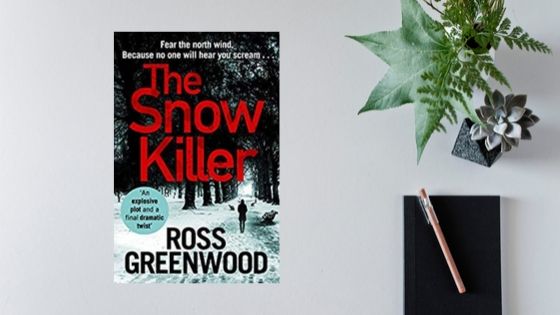 Today I am delighted to share my thoughts on The Snow Killer the first book in the brand new DI Barton Series from Ross Greenwood. My thanks to the author and publisher Boldwood Books for inviting me to be a part of the launch as I loved the book. Here’s what it’s all about:

A family is gunned down in the snow but one of the children survives. Three years on, that child takes revenge and the Snow Killer is born. But then, nothing – no further crimes are committed, and the case goes cold.

Fifty years later, has the urge to kill been reawakened? As murder follows murder, the detective team tasked with solving the crimes struggle with the lack of leads. It’s a race against time and the weather – each time it snows another person dies.

As an exhausted and grizzled DI Barton and his team scrabble to put the pieces of the puzzle together, the killer is hiding in plain sight. Meanwhile, the murders continue…

The first in a new series, Ross Greenwood has written a cracking, crackling crime story with a twist in its tale which will surprise even the most hardened thriller readers. Perfect for fans of Mark Billingham and Stuart MacBride.

Well what a brilliant start to a new series. With chapters that alternate between the guilty party and the police who are investigating a series of murders, Ross Greenwood takes us on a journey that is both full of thrills and emotion. I absolutely loved it.

The story is kind of a dual timeline affair, with the story opening in the past when a young child witnesses the murder of their sister and parents and is themselves left for dead. But nearly dead is not really dead, and soon revenge becomes the only item on the surviving child’s personal agenda. Fast forward fifty years and we are faced with a brand new series of murders in which the victims are not the most sympathetic and the motive is as murky as the weather. The killer continues to reveal moments from their past, giving more insight into their present which really adds to the story.

Ross Greenwood has created a really intriguing tale and as much as I could never condone murder, I did in some respects sympathise, if not empathise, with the killer. It is a really skilful writer who can get you on side with both the killer and the investigative team, but that is exactly what happens here. Not only that, but with a whole host of potential suspects, the killer is hidden in plain sight, and their identity is kept well hidden until the end of the book.

I really did like the character of DI John Barton, a man dedicated to both his family and his job. He is down to earth and extremely likeable and I’m really looking forward to seeing how her develops as a character as the series progresses. His partner in crime fighting, DS Zander, has had a very difficult past and the relationship between him and Barton is truly touching, giving the story a real emotional edge to match that of the killer’s loss. Then there is his relationship with his boss and mentor, DCI Naeem which is refreshing to see is very positive in a genre which is heavy on the conflict amongst the ranks. And finally we have DS Kelly Strange. New to the team, she is a character who I really liked, in spite of a few prickly moments. Read the book and you’ll understand what drives them.

The pacing in the story is spot on, picking up when the murderer is on the hunt, and especially at the end with an altogether explosive conclusion to the investigation. Yet it is not all break neck speed, which reflects the setting, and also the very nature of the investigation in which the killer is always three steps ahead.

It was a story which gripped me from the off and kept me glued to the page right to the end. A real one day read kind of story. The book had a feeling of authenticity about it, and was full of surprises and genuine emotion. With a team I really enjoyed reading about, I’m excited to see what comes next.

Ross Greenwood is the author of six crime thrillers. Before becoming a full-time writer he was most recently a prison officer and so worked everyday with murderers, rapists and thieves for four years. He lives in Peterborough and his first title for Boldwood – the beginning of a series – is The Snow Killer to be published in November 2019.

4 thoughts on “The Snow Killer by Ross Greenwood”