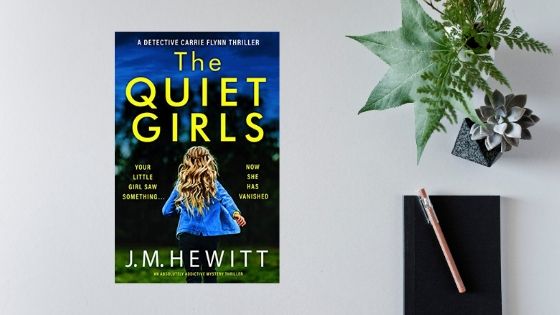 Today Mandie is back in the driving seat with a #bookontour review of The Quiet Girls by J.M. Hewitt. A big thank you to Noelle Holten of Bookouture for including us in the tour and providing the advance copy for review. Here’s what the book is all about:

‘Hattie!’ Carrie called, an edge to her voice. ‘Hattie, this isn’t funny, come out now.’ Carrie moved through the woods on shaking legs. She tried calling, shouting, screaming, but everything was quiet. Her little sister was gone.

Detective Carrie Flynn’s sister Hattie was kidnapped when they were both little girls. After the police failed to find the culprit, Carrie swore she would become a detective and solve the case herself. But the face of the man who snatched Hattie is a blank in her memory…

Twenty years later, eleven-year-old Melanie Wilson is reported missing, a quiet child who longs to fit in, just like Hattie… Carrie has to fight off memories of her lost sister to concentrate on the case, but she soon finds grainy black-and-white footage of Melanie boarding a boat and vanishing. She discovers Melanie has been taken to Pomona, a deserted island, almost inaccessible from the city. But who took little Melanie, and why?

Then the police receive a desperate cry for help from another young girl: I gave you his name, told you where to find him, but you did nothing. My blood is on your hands. Carrie traces the call to the same docks where Melanie was last seen. Now she has a second missing child to save.

But the sound of the broken voice has unlocked something in Carrie. The blurred face of her sister’s kidnapper is starting to become clearer…

Carrie is sure the lost girls are in terrible danger – and that there’s a link between her sister’s disappearance and this case. To find Melanie, Carrie must unleash the memories she’s buried for years. And if she uses her own demons to bring Melanie home, can she finally find out what happened to her sister?

This absolutely unputdownable thriller will keep you up all night until you reach the final heart-stopping page! Perfect for fans of Angela Marsons, Val McDermid and Lisa Regan.

Detective Carrie Flynn is haunted by her past and this has shaped her future. When she was a child, her younger sister went missing, something she blames herself for, so she has spent her career in the police trying to make up for it.

Carrie finds herself involved in what appears to be two separate cases, both involving young girls, however as her investigations progress, she is disturbed to find that they might actually be linked together.

The book goes between the current cases and the disappearance of Carrie’s sister giving us an insight into what drives her to work as hard as she does. This also gives her character more depth. The other characters in the book didn’t seem quite as well developed with the exception of Melanie and her mother but it didn’t spoil my enjoyment of the book. Dealing with child abduction is not easy but the reaction of Melanie’s father seemed a little odd at times, and this fact may divide readers. I get that he wanted to protect her from harm but moving to an island with a family who up until that time they had very little interaction with and going completely off grid was a touch extreme. That being said I found myself really drawn into the story as you try to work out how all the different storylines link together or if they even do. What I found fascinating was the fact that the island they relocated to in Manchester actually exists and has quite a bit of history to it (yes, I googled it).

This is the second book in the Carrie Flynn series and although I have not read the first book there was never a time where I felt I was missing something, so it works perfectly well as a standalone. With the pace of the book and my natural curiosity on how it would end I found that I raced through it in a couple of days. This is certainly an interesting read and I will keep an eye out for book 3 as I am intrigued to see if Carrie ever gets to the bottom of what happened to her sister.

J.M. Hewitt writes crime fiction and is the author of three previous crime fiction novels and has been published in two short story publications. Her work usually incorporates twentieth and twenty-first century events and far flung locations, and her novels explore the darker side of human behaviour.

In contrast to the sometimes dark content of her books, she lives in a seaside town in Suffolk with her dog, Marley.

When she was ten years old she’d read all the books she owned, all those on her mother’s bookcase and everything the library had to offer. She decided the only course of action to take was to write her own stories. Thirty years later, she is still writing them.

One thought on “The Quiet Girls by J.M. Hewitt”