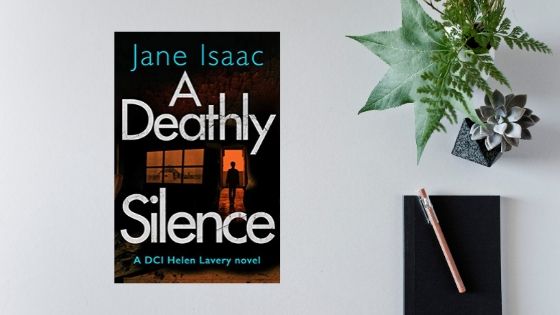 Today it is my great pleasure to be joining the blog tour for A Deathly Silence, the latest DCI Helen Lavery thriller from Jane Isaac. My thanks to the publisher, Legend Press, for providing a copy of the book for review and for inviting me to join the tour. Here’s what the book is all about:

When the mutilated body of a police officer is found in a derelict factory, the Hamptonshire police force is shocked to the core.

DCI Helen Lavery returns from injury leave and is immediately plunged into an investigation like no other. Is this a random attack or is someone targeting the force? Organised crime groups or a lone killer?

As the net draws in, Helen finds the truth lies closer than she could have imagined, and trusts no one.

But Helen is facing a twisted killer who will stop at nothing to ensure their secrets remain hidden. And time is running out…

A gripping thriller perfect for fans of Gillian Flynn, S.J. Watson, B A Paris and Sophie Hannah

I have to start by saying that although this is book three in the Helen Lavery series, it is the first one I have read. It works perfectly well as a standalone, and whilst it does give away a few things that would be spoilers for the first books in the series, which you’d expect reading out of sync, the only real disadvantage I found myself at is that I’ve missed some flipping good reads so far. I will correct that!

The book opens in very dramatic style, with the discovery of a murdered woman by two young boys. Now it is pure chance, and perhaps a touch of bad luck on their part, that they even find her, given that she has been left in an abandoned factory, one which no-one would be expected to visit any time soon. Her murder is brutal, the violence inflicted extreme, but it is more than just the nature of her injuries that gives the Police cause to want justice. the victim is one of their own, and as her first case back after injury and losing someone close to her, becomes personal, emotional and all too consuming for Helen.

What I loved about this book is the way in which Jane Isaac really brought the characters to life for me. Although it was my first time with the team, I got the measure of them very quickly and they became characters I was very invested in. The author has a great way of making the characters feel real, and really capturing their emotions, be it the kids who are up to no good and get far more than they bargained for, or the family who are torn apart and broken by Sinead’s murder. Even the way in which the Police Officer assigned to the case are affected is emotionally sensitive and authentic. It really drew me into the story and made me care about what was happening.

Aside from great characters, we are treated to a really intriguing story and a complete mystery as to why Sinead would be murdered in such a grotesque way. And while the method of murder is quite dark, it is never too graphic, always just enough to enrage you as a reader but not push you away. The author takes readers down a number of roads before we finally find out who the killer is, and in quite dramatic fashion. In spite of her occupation, Sinead has no clear enemies and the reasons for her murder, which seems almost gangland in design, are baffling. I loved that uncertainty, the question mark that hung over Sinead’s life and that of those around her. It kept the tension high and made we want to read more.

The pacing was spot on, slow and reflective at times, but full of frantic action when needed, especially towards the end in a high stakes showdown with Sinead’s murderer. It really got the adrenalin pumping and took me a little by surprise when the killer was finally revealed.

I’m looking forward to catching up on the rest of the Helen Lavery series. If this book is anything to go by, I’m in for a real treat.

Jane Isaac is married to a serving detective and they live in rural Northamptonshire, UK with their daughter, and dog, Bollo. Jane’s debut novel, An Unfamiliar Murder, introduces DCI Helen Lavery and was nominated as best mystery in the ‘eFestival of Words Best of the Independent eBook awards 2013.’

The Truth Will Out, the second in the DCI Helen Lavery series, was nominated as ‘Thriller of the Month – April 2014’ by E-thriller.com and winner of ‘Noveltunity book club selection – May 2014’.