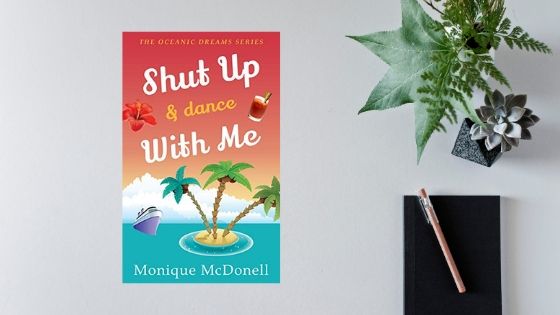 Today it is back to Mandie who has a review of Shut Up And Dance With Me by Monique McDonell, book 7 in the Oceanic Dreams series. With thanks to the authors who invited us to review the series. Here is what the book is about:

Forgiveness is hard but fighting  their attraction is even harder.

As they set sail for madness and mayhem aboard Oceanic Aphrodite, up-tight fashion buyer, Sandy and sexy Italian restaurateur, Danny are onboard solely to stand up as witnesses to their friends second marriage.

Unfortunately, the maid of honour and best man can only agree on two things – this wedding is a bad idea and they can’t stand each other. They used to be friends but not anymore – the bride and grooms divorce forced them to pick teams and they’ve been on opposite sides ever since

A week on a cruise ship is a long time and hard though they try to avoid each other, the universe has other ideas.

All aboard for a fun opposites-attract, enemies-to-lovers romance. If you love sandy beaches, cocktails, second chances and happily ever afters you’ll love Shut Up and Dance with Me.

Shut up and Dance with Me is the seventh book in the Oceanic Dreams series. All the books in the series take their titles from various songs and this time the book also pays a little homage to Grease as the two main characters are called Danny and Sandy and there are even little references to Olivia Newton John along the way.

Sandy is on the cruise only because her best friend has decided to re marry her ex but she doesn’t think it is a good idea, a sentiment echoed by his best friend Danny. In fact, for a long time that is the only thing these two can agree on. They used to be really good friends but as is the way when couples break up, they took sides and so the friendship became a little fractious as Sandy couldn’t understand why Danny would stick by someone who treated her best friend in that way. What you cant deny is that clearly both of them will do anything to ensure their friends happiness even if they don’t agree with what they are doing. I will admit that if it had been me that had been cheated on I would no way take the other half back… let alone remarry him like Vivi did with Lance but then again…they do say love can make you do strange things.

Despite knowing that eventually Sandy and Danny will end up together you can’t help but enjoy the book as you follow Sandy fighting her attraction to Danny and his attempts to get her to admit that she does like him and that maybe just maybe he is not like the men in her past.

Monique McDonell has created characters that you will get to like in a very short space of time and even possibly identify with. The book has a quick pace that makes it a must for a poolside read and you will find yourself chucking at some of the situations that arise. Each book is set in the same week in time but as the books are all written by different authors you don’t get the feeling that you have read it all before. Read it on its own or as part of the whole series but you won’t be disappointed.

I am an Australian author who writes fun, flirty contemporary women’s fiction including chick lit and romance. After many attempts writing books that made me miserable decided to write books with happy endings and have been loving the journey ever since.