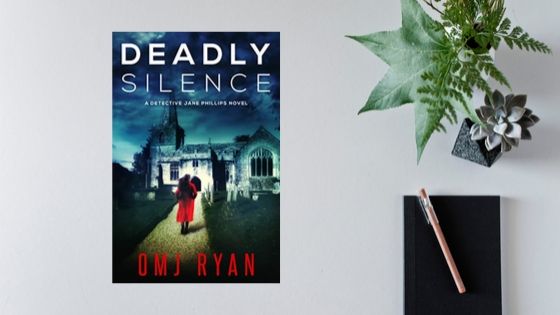 Today I hand the blog back over to Mandie who has a review of Deadly Silence by OMJ Ryan, book one in the Detective Jane Phillips series. Thanks to Emma Welton of damppebbles tours for inviting us to join in and to publisher Inkubator Books for providing the advance copy of the book for review.

Some sins can never be forgiven.

DI Jane Phillips was a star detective driven by a relentless quest for justice. But then she stepped outside the law.

Now, demoted and suffering with PTSD, she finds herself facing the deadliest threat of her career — a serial killer who is preying on vulnerable women, murdering them in a shocking and bizarre ritual.

A master of deception, he selects his victims at random. Or so it seems. But as Phillips investigates, she begins to see a method in the killer’s madness. Perhaps these victims aren’t random at all…

As the pressure mounts, can Phillips find the link between these ritual murders before the killer strikes again — or will her dogged determination to solve the case bring his deadlysilence to her door?

Deadly Silence is a gripping mystery thriller that will keep you up all night as it races towards its shocking conclusion. Perfect for fans of Robert Bryndza, Angela Marsons and Peter James.

Deadly Silence once again sees us in the company of Jane Phillips and her team and this time they are taking centre stage. We first met her in Deadly Secrets as she investigated Radio personality Marty Michaels and although this is billed as Detective Jane Phillips Book 1 it does follow on quite nicely from the authors first book. After the incidents during the case Jane has now been demoted to DI and is working under a DCI that she has had dealings with in the past and this causes quite a lot of friction along the way. Despite her demotion they still see her as the gov and will follow her lead over their new DCI every time.

This time round we get to learn a little bit more about Jane and her team and what makes them tick. She is suffering from PTSD, yet this doesn’t stop her from throwing herself full pelt into the case even if it once again puts her in the line of fire quite literally. I have to say I like her as a character and the fact that she is quite straightforward and determined to investigate every angle to ensure that they get the right person even when it means butting heads with her DCI (and at times I think she enjoys it a little too much). I think my favourite characters have to be Jonesy and Bovalino. They are constantly taking the mick out of both Jane and newbie to the team Entwistle but are professional when they need to be.

The team are struggling to find the connections between several murders that have taken place and their investigations are not helped by their DCI who is out to get a promotion and sees closing the case quickly as his way of achieving this. They are also hampered by the families of the victims lying repeatedly to hide other things that are going on. Once the connection is made however the hunt is then on to find the killer.

I will admit to having a little sympathy for the murderer as although you can’t condone what they are doing, I do understand why they felt they had no other option than to do what they did. This is another great book by OMJ Ryan as it has enough pace to keep you reading to the very end and like the police you are left wondering who the killer is right to the end.

Hailing from Yorkshire, OMJ Ryan worked in radio and entertainment for over twenty years, collaborating with household names and accumulating a host of international writing and radio awards. In 2018 he followed his passion to become a full-time novelist, writing stories for people who devour exciting, fast-paced thrillers by the pool, on their commute – or those rare moments of downtime before bed. Owen’s mission is to entertain from the first page to the last.