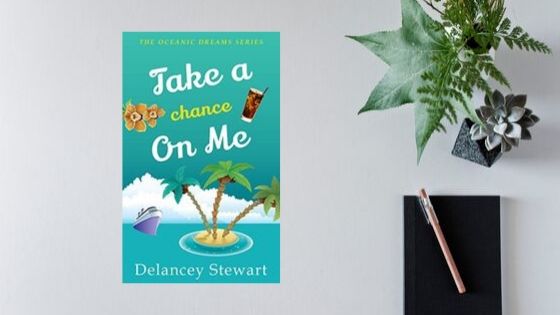 Today I hand back to Mandie who has a review of Take A Chance On Me by Delancey Stewart, book six in the Oceanic Dreams series. Here’s what the book is all about:

He was the man of her dreams and their lives were all planned out—until he disappeared without explanation. Only to reappear on the decks of the Oceanic Aphrodite six years later.

Selena Spark has a plan for her life. It’s a new plan, one she devised after her previous plans—the ones she made with her college boyfriend and supposed future husband and business partner fell through—but it’s a good plan.

Step One: Put eyes on the resort Oceanic has built with her company on Grand Cayman, and determine if it is up to her company’s high standards.

Step Two: If it is, score the management position at that resort.

Step Three: Move to Grand Cayman for her dream job and live happily ever after in paradise.

But you know what they say about plans.

And when her sister is left at the altar just before the cruise sails and needs consoling, Selena decides to bring her along. But when Lincoln Addis turns out to be the activities director aboard the Aphrodite, and when he is assigned to oversee her Oceanic experience and confesses that he’s also in the running for the resort management gig? And when she realizes she still loves him, and he’s never stopped loving her?

Selena may have to make some new plans.

Take a Chance on Me is a light-hearted second-chance romance set in the sun and sand of the Caribbean. The perfect beach read!

Take A Chance on Me is the sixth book in the Oceanic Dreams series and follows a new group of people aboard the Oceanic Aphrodite as it operates a singles cruise. This time we meet Selena Spark who is aboard the cruise ship on business not pleasure, having been sent by her boss to investigate the possibility of a joint enterprise on Grand Cayman with the Cruise company. Everything is going fine until she realises she will have to deal with her ex-boyfriend and once again they are in competition for the same job.

I have to say I have been enjoying this series of books and Take A Chance on Me is a great addition to it. The main characters are very likeable, and you can tell that, even though they have been apart for six years they still have feelings for each other. What I like is the author has not fallen into the trap of the main characters acting spitefully towards each other with any trace of one up manship, before they finally realise they still want to be together. There is just the genuine awkwardness that you would expect when you are faced with someone you were once close to, suddenly re appears in your life. The only possible “typical male” moment in the book is when you find out why Lincoln left Selena in the first place. I will just say one word – ego and you will understand what I mean. Despite this you are routing for them to work it out and quickly. I just love the settings of the ship and the islands they visit that take you to places that you long to discover for yourself.

This book is a great holiday read that you can take as part of a series or as stand alone. Either way you won’t be disappointed.