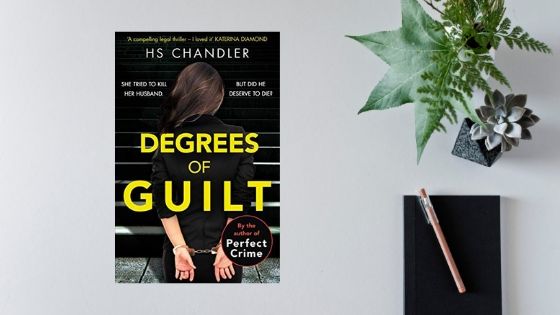 Today it is my absolute pleasure to be one of the two blogs closing out the blog tour for Degrees of Guilt, the compelling new courtroom based thriller from H.S Chandler. My thanks to Tracy Fenton of Compulsive Readers for inviting me to join the tour and to publishers Trapeze for providing a copy for review. Here’s what the book is all about:

When you read this book, you will think you know every twist in the tale.

Maria is on trial for attempted murder.

She has confessed to the crime and wanted her husband dead.

Lottie is on the jury, trying to decide her fate.

She embarks on an illicit affair with a stranger, and her husband can never find out.

You will think you know who is guilty and who is innocent.
You will be wrong.

A gripping, sexy and twisty novel for readers who devoured

ANATOMY OF A SCANDAL, APPLE TREE YARD and HE SAID/SHE SAID.

What struck me most about this book when I first started reading it was the sense of calm and serenity which was found amongst the opening pages. If it hadn’t been for the absolute chaos that was encapsulated so succinctly in the opening sentence, you would be forgiven for thinking that this was simply a story about a woman’s mid-life crisis. And I suppose, in some ways, it is. If you can call Maria Bloxham’s attempt to curtail her husband’s life a ‘crisis’ that is. It certainly was for Edward …

After that absolute corker of an opening chapter, during which, as a reader, you will no doubt already be starting to form an opinion on the veracity of Maria’s guilty plea, we are transported forward several months to the opening of her trial where, over a series of days, the jury, and the reader, is provided with all the evidence that the prosecution hold against Maria. It is standard courtroom drama fair – the cross examinations, the jury deliberations, the (attempted) murder weapon and the sympathetic look at what has become of the intended victim. And yet … it is so much more than this too, because this case isn’t perhaps as clear cut as the prosecution would have us think and Maria’s own story has a significant bearing on what has, and does, come to pass.

What I enjoyed about this book is the way in which the author has taken her own experience of the legal system, stretched it a little for artistic purposes, and woven it in amongst a backstory which is both shocking and compelling in equal measure. As you read on, it is very clear to the reader what is really happening, at least in Maria’s life. When it comes to that of Lottie, one of the jurors, it is less straightforward. Again, a lot of her story seems very familiar, sets off alarm bells, and you come to expect that she could be Maria’s only hope in an apparently already biased jury.

The story and pacing ebbs and flows perfectly. Whilst this is a trial, and as such certain elements of process have to take time, you do not feel that the author has lingered too long on the legal aspect, curtailing the scenes of cross examination as necessary to drive the action. The courtroom scenes are broken up with moments of reminiscence about Maria’s past, and also looking at Lottie’s life outside the courtroom. Wife, mother and now – to her delight at escaping her routine – juror. It adds an air of authenticity to the story as we see Lottie, and Maria, battling with their consciences for very different reasons. I loved this very humane aspect of the story which gave the whole book a different kind of emotional depth.

There is a vast cast of characters in this book. Not so many that you would have trouble keeping track though as some are mere bit parts, the people who are there simply to make up the jury numbers. All are rich in diversity and drawn from a wide array of professions, and each, in their own way, adds to the story. From the over officious Foreperson for the jury, to the Barrister prosecuting Maria, all felt very real, sometimes likable, sometimes not, but I was always able to recognise their motivations and in some cases, recognise the characteristics of some people I knew. That ability to make the characters feel real was the key to keeping readers invested in this book, especially when it came to Maria as she is not always a likeable character, no matter how much sympathy may be felt for her position. Also using Lottie’s point of view to convey how she was feeling about the trial and how she was interpreting the evidence was a very clever touch as it did steer my thinking at times.

The book does look at a very important and, sadly, relevant issue – that of psychological abuse and coercive control – and uses it as a centre around which to form a very absorbing narrative. There were times I felt shocked, felt that Maria was almost vindicated in her actions. Only almost as I could never condone violence such as this, but still … And the surprises kept on coming, scene after scene, until I ended up second guessing myself. There were elements I had foreseen, others which caught me completely unawares, but all of which formed to make a very intriguing read.

From the calm and yet shocking opening through to the truth which is laid bare in the closing chapters, this book kept me hooked, and I can’t wait to see what the author brings us next. If you like a legal thriller, one with an emotional undercurrent, then this is definitely recommended.

A former barrister, HS Chandler is a pseudonym for bestselling crime author Helen Fields, who practised for thirteen years in both family and criminal law. Having extensively prosecuted and defended, she is an avid believer in the right to a fair trial, and in the invaluable role that juries play in the British legal system. Helen was born in Hampshire and now lives in the US.

5 thoughts on “Degrees of Guilt by H.S. Chandler”