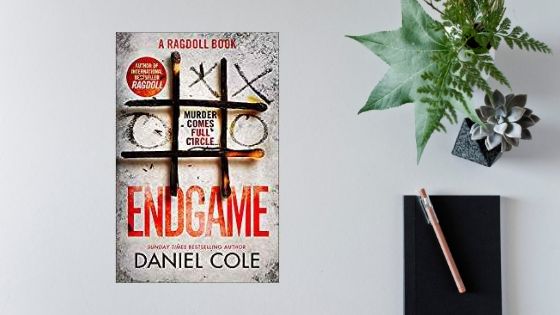 Today it is a bittersweet moment as I join the blog tour for Endgame, the final book in the #Ragdoll# triology by Daniel Cole. Bittersweet because I have loved these books, madcap and frenzied murderfests that they may be, and I’m sad to see them reach the end. My thanks to Tracy Fenton of Compulsive Readers for inviting me to join the tour and to publisher Trapeze for providing a copy of the book for review. Here’s what it’s about:

A locked room. A dead body. A secret that went to the grave.

When retired police officer Finlay Shaw is found dead in a locked room, everyone thinks it’s suicide. But disgraced detective William ‘Wolf’ Fawkes isn’t so sure.

Together with his former partner Detective Emily Baxter and private detective Edmunds, Wolf’s team begin to dig into Shaw’s early days on the beat. Was Shaw as innocent as he seemed? Or is there more to his past than he’d ever let on?

But not everyone wants Wolf back – and as his investigation draws him ever deeper into police corruption, it will not only be his career on the line – but the lives of those he holds closest as well…

The explosive new thriller from the Sunday Times and international bestseller, perfect for fans of Fiona Cummins and Helen Fields.

Ah … William ‘Wolf’ Fawkes. How I have missed you. Not that I didn’t enjoy book two and the brilliant combination of Baxter and Rouche, but there is some unfinished business between Wolf and Baxter that I was really intrigued to see play out. And play out it does, in the usual maddening and thoroughly enjoyable style.

Yes folks, Wolf is back and once again he is bringing trouble to Baxter’s door. Not that she doesn’t have enough heaped there already, but that’s a slightly different story … Wolf has returned to face his dues, but on the understanding that he also gets to look into the death of his former mentor, Finlay, who was believed to have committed suicide. Something about this fails to ring true for Wolf, or for Baxter is she was being honest, and he is determined to find out what really happened. Only Finlay was in a room, sealed from the inside with no other routes for escape, cause of death a single gunshot wound to the head. An open and shut case then …

Well, lets face it. That would make for a very short book. And nothing that involves Wolf is ever that straightforward. And whilst the death of Finlay forms the central thread of the novel, it is far from being the full story. With action moving from the present day investigation to the earlier days of Finlay’s career where his fate was soon to be sealed, along with the cementing of his love for his yet -to-be-wife Maggie, there are a number of secrets set to be revealed that will shock both his fictional colleagues and the loyal reader alike.

Now if you have come here looking for the same level of gore and violence and the preceding books, you may well be disappointed. This book contains more humour, in site of a difficult storyline, but it is much more of a who or rather how-dunnit read. It is a straight forward locked room mystery, or as straight forward as a case involving Wolf can ever be. Add into this some amusing scenes as Edmunds gets to grips with his new career as a private investigator, and a few potentially career ending decisions by Baxter, and you have a very engaging, sometimes fun, sometimes emotional, read.

I love the characters in this book, love the dynamic between Baxter and Wolf. Wolf is far from a popular character, with Maggie seemingly the only person happy to see him. His ability to rub folk up the wrong way hasn’t dulled in the time he has been missing, and it makes for a much more entertaining read as a result. I have loved getting to know a few of the other characters more too, some of them often surprising me by their actions and forming the most unlikely of alliances to see justice done. Whether true justice is something that ever has a place within this trilogy … well you need to read to find out.

The book pulls together a lot of unresolved plotlines making this a perfect place to bring the series to a close. Or does it? Expect the unexpected, plenty of dark humour, even moments that will make you chortle out loud – they certainly did me – as well as plenty of emotion. it was great to see Wolf back, being his unconventional, unpredictable self, as well as seeing the conflict, emotional and metaphorical, between him and Baxter. I am only sad that the series has come to an end as I’ve thoroughly enjoyed it.

Recommended for fans of the series.

At 33 years old, Daniel Cole has worked as a paramedic, an RSPCA officer and most recently for the RNLI, driven by an intrinsic need to save people or perhaps just a guilty conscience about the number of characters he kills off in his writing.

He currently lives in sunny Bournemouth and can usually be found down the beach when he ought to be writing book two instead.

My little #agathachristie stack. 😍
I’ve seen this about and been might curious so decided to treat myself. The Book Club by @cjcooper_author
Devoured this whilst sipping my Sunday morning cappuccino. The Reckoning by @rachelamphlett, part of her Case Files short story series. A fab story and kept me smiling. Out today.
Treated myself to this beauty to keep my hardback special editions up to date. Midsummer Mysteries by Agatha Christie.
I've had a pretty good July all things considered. Had a birthday, ate cake, discovered tropical cider which tastes like boozy lilt ... Also managed to read 18 books. Can't complain about that. Not my most prolific month but when the weather was so warm that all I wanted to do was sleep, I'm impressed I got that far.
Today Mandie shares her thoughts on The Lies I Tell by @ohthatjoelhames