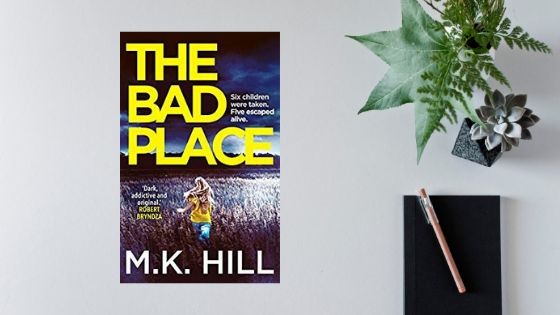 Today I’m delighted to share my thoughts on The Bad Place, the brand new thriller from author M.K Hill. Released tomorrow, this is the first in what I hope will be a long running series with new publisher Head of Zeus. My thanks to the publisher for supplying an advance copy for review. Before we hear what I think, here’s what it’s all about:

The newspapers called it The Bad Place. A remote farm out on the Thames estuary, where six children were held captive for two weeks. Five of them got out alive.

That was twenty years ago. Now adults, they meet up annually to hold a candlelit vigil for their friend who died. The only rule is that no-one can talk about what happened the night they escaped. But at this year’s event, one of them witnesses a kidnapping. A young girl, Sammi, is bundled into a van in front of their eyes.

Is history repeating itself? Is one of them responsible? Or is someone sending them a twisted message?

DI Sasha Dawson, of Essex Police, is certain that the key to finding Sammi lies in finding out the truth about The Bad Place. But she also knows that with every second she spends trying to unlock the past, the clock ticks down for the missing girl…

I’ll be honest. I loved Mark Hill’s Ray Drake series and was a little disappointed to hear he was going in a new direction. But only for a nanosecond because, as much as I love the characters in the other series, I love the writing style too, so I was equally intrigued to see what he was bringing us all instead.

What we have here is a series that, whilst still a police procedural if you want to use that term, is as far removed from the dark and deception laden world of Drake and Crowley as you could get. At least as far as the main character, DI Sasha Dawson, and her team go. The story … well that’s kind of dark too but it’s good to see the police are well and truly on the right side of the law.

The story opens in very dramatic fashion. A hostage situation which soon escalates and results in a very traumatic and shocking opener that will stick with you throughout the book. Which is just as well as this is the set up and premise for an investigation which is full of tension, mystery and threat that will stretch this new team to their limits.

I don’t want to say too much about the story apart from the fact that Dawson and her team find themselves investigating the disappearance of a young girl with harrowing links to the case that forms the opening of the book. That was Dawson’s first case on the job and when it looks like history may be about to repeat itself, it soon turns very personal for the Detective and her team.

I really enjoyed the way the author wove the two stories together, that of the abduction of a group of teenagers some years earlier, and the more recent abduction that one of them witnesses. The threads all slowly draw together, allowing a clearer picture to be formed but not without devastating consequences and dark revelations being made along the way. The tension ebbs and flows, the list of suspects is long, and the truth that is being withheld is quite shocking in its reveal.

I really liked the character of Sasha Dawson. She’s not your everyday super young and ambitious, sometimes hard headed leader that has come to typify a lot of recent books. She is strong but in a way that is encouraging to colleagues and far less confrontational than many characters. She doesn’t feel like a cliche. Wife and mother, she is not infallible, and her detecting skills do not seem to stretch quite as far as past her front door. She bares scars, sometimes hides emotion, but I did warm to her quickly as I did (the majority of) her team.

It was certainly an interesting introduction to the team, one that adds a little humour and gives a clear indication of their personalities. They are all fun and unique, from Lolly to Ajay. Even Craig who I can only describe as being a bit of a tit, manages to redeem himself a little by the end of the book.

Speaking of endings, the final chapters see the action and pace ramp up, the level of jeopardy skyrocket, and a mixture of shocking revelations and emotionally charged confessions playing games with your emotions as a reader. All very exciting, very compelling stuff that kept me hooked right to the end.

Tense, thrilling and full of mystery, this is a series I am very keen to see more of. I can’t wait until book two to see what the team get up to next.

I’ve been a journalist and an award-winning music radio producer. I worked for about five minutes in PR. But I write the Drake and Crowley thriller series now, which is just as well, because I love writing. It’s my dream job.