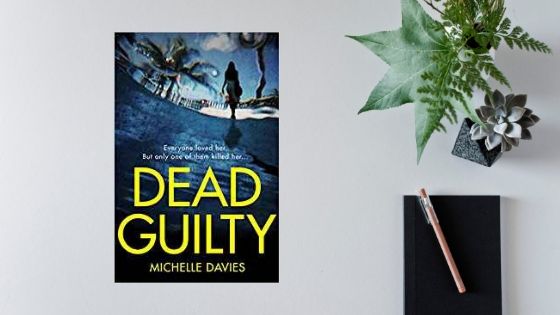 Today it is my great pleasure to be taking part in the blog tour for Dead Guilty, book four in the Maggie Neville series by Michelle Davies. A massive thanks to Anne Cater of Random Things Tours for inviting me to join the tour and to publishers Macmillan for providing an advance copy for review. Here’s what the book is all about:

Has the killer in DC Maggie Neville’s cold case returned after a decade of silence?

Katy Pope was seventeen when she was brutally murdered on a family holiday in Majorca. Despite her mother’s high rank in the Met and the joint major investigation between the British and Spanish police, Katy’s killer was never caught.

Ten years later, Katy’s family return to the Spanish island to launch a fresh appeal for information, taking with them the now skeletal team of investigating Met detectives, and newly seconded Maggie as the family liaison officer.

But Maggie’s first international investigation quickly goes from being more than just a press conference when another British girl there on holiday goes missing, and Katy’s killer announces that it’s time for an encore . . .

I was pretty late to the Maggie Neville series but . have to say that I’m glad I took the time to catch up. In this fourth instalment we find Maggie having recently transferred to the Met Police. Life isn’t all she had hoped, with her new Inspector treating her like a dogsbody and not showing signs of any trust whatsoever. When she is offered the opportunity to act as Family Liaison on a high profile case, she jumps at it and is soon on a plane to Majorca. Here she finds herself embroiled in not only a perplexing and emotional murder cold case, but also battling against rising feelings for on of the family she is there to help. When another young woman goes missing in very similar circumstances as their first victim, Maggie and the team have to work fast to prevent another senseless murder.

What I love about this series is the way in which the author has provided an insight into the world of the Family Liaison officer, an all important part of the modern policing family. Maggie Neville is a great character – sympathetic, intelligent, astute, but also very human, prone to the same kind of emotional turmoil and mistakes that we can easily recognise in ourselves. She is very torn in this books, and highly likely to see history repeating itself when she finds herself attracted to the son of the couple she has been sent to help. She is in committed relationship, but will this stop her from making a potentially life changing mistake?

The case is a highly charged one, and one which keeps you guessing as a reader from start to finish. There are no end of suspects in the original murder case, friends, family and resort locals alike, and the current investigation throws light upon them all. The author makes good use of evidence, and the occasional red herring, to keep up the suspense, and although with some chapters focused on the killer, you are still kept in complete suspense as to who that is. This is a story of obsession of the darkest kind, and the very controlled menace which emanates from the perpetrator will make your skin crawl. It did mine.

With moments of real tension, scenes that will keep you on the edge of your seat, quiet moments of introspection and deep emotion, there is a little bit of everything for the reader in this book – even a touch of romance. Sort of. The ending opens up so much for Maggie in the way of new beginnings that I’m really intrigued to see where the author takes us next. A really entertaining read that had me hooked. Fans of the series will be left satisfied and yet shaking their head at Maggie, but still desperate to know more. Definitely recommended.

Michelle spent the formative years as a reporter on a local newspaper in Buckinghamshire and interviewed many relatives of serious victims during that time.

Later, as a freelance journalist for women’s magazines, she secured an interview with Kerry Needham, whose son Ben Needham went missing in Kos in 1991 when he was a toddler. It was hearing her talk about it that gave Michelle the idea for making her central police character a FLO.

Today on jenmedsbookreviews.com I’m resharing my thoughts on #DeepDirtyTruth by @crimethrillergirl in readiness for the release of the fourth #lorianderson novel, #DeepDarkNight next month. I love Lori and this book sees her in deep jeopardy, on the hook with the Miami mob as she fights to save her own life. Full of action and tension, fans of the kick ass heroine will love it. A price on her head. A secret worth dying for. 48 hours to expose the truth… Single-mother bounty-hunter Lori Anderson finally has her family back together, but her new-found happiness is shattered when she’s snatched by the Miami Mob – and they want her dead. Rather than a bullet, they offer her a job: find the Mob’s ‘numbers man’ who’s in protective custody after being forced to turn federal witness against them. If Lori succeeds, they’ll wipe the slate clean and the price on her head – and those of her family – will be removed. If she fails, they die. With North due in court in 48 hours, Lori sets off across Florida, racing against the clock to find him and save her family. Only in this race the prize is more deadly – and the secret she shares with JT more dangerous – than she ever could have imagined. In this race only the winner gets out alive… #booklove #lovebooks #books #bookstagram #bookstagrammer #booksblogger #bookblog #bookblogging #bookbloggers #booknerd #bookworm #booksofinstagram #booksofinsta #bookbloggersofinstagram #booklover @orendabooks #yearoforenda
Head over to jenmedsbookreviews.com and you’ll find my thoughts on #BetonRouge, the brilliant second Chastity Riley book by #SimoneBuchholz. This one has a slightly different styling to Blue Night, but still has the same sassy hard drinking prosecutor we all love, this time in the road with her new Investigative partner Ivo. I love Ivo. On a warm September morning, an unconscious man is found in a cage at the entrance to the offices of one of Germany’s biggest magazines. He’s soon identified as a manager of the company, and he’s been tortured. Three days later, another manager appears in a similar way. Chastity Riley and her new colleague Ivo Stepanovic are tasked with uncovering the truth behind the attacks, an investigation that goes far beyond the revenge they first suspect … to the dubious past shared by both victims. Travelling to the south of Germany, they step into the hothouse world of boarding schools, where secrets are currency, and monsters are bred … monsters who will stop at nothing to protect themselves. A smart, dark, probing thriller, full of all the hard-boiled poetry and acerbic wit of the very best noir, Beton Rouge is both a classic whodunit and a scintillating expose of society, by one of the most exciting names in crime fiction. #booklove @orendabooks #lovebooks #books #bookstagram #bookstagrammer #bookblogger #bookblog #bookblogging #bookbloggers #booknerd #bookworm #booksofinstagram #booksofinsta #bookbloggersofinstagram #yearoforenda
Had to drive through #wentshirewitch #changeling territory tonight to get home from the #orendaroadshow . No sighting this time around ...
My really lovely looking #OrendaShelfie now that I have @k_o_dahl’s #Sister along with the rest of the family. On the way for a spot of retail therapy and dinner now before @mandie163.mg and I hit the #OrendaRoadshow in The Wirral. #hariboanyone? #books #booklove @orendabooks #bookish #bookstagram #bookstagrammer #bookblog #bookblogger #bookblogging #bookbloggers #booksofinstagram #booksofinsta
Will you #SurviveTheHeatwave 😱 The brand new standalone from Katerina Diamond is coming June 25th 2020. @AvonBooksUK
Nice short walk along the riverside to get to the station this morning. Next stop Manchester then Stafford then home. For now...