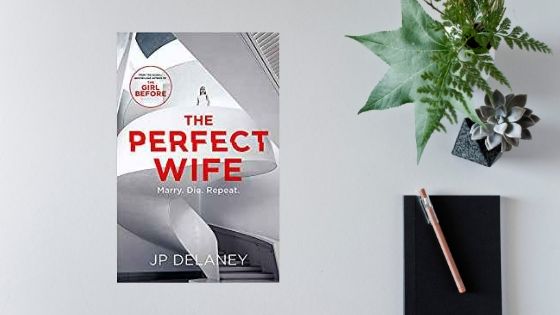 Today Mandie has a review of The Perfect Wife, the brand new thriller from author JP Delaney. Thanks to Quercus Books who supplied a copy of the book for review. Here is what it is all about:

“There’s something I have to explain, my love,” he says, taking your hand in his. “That wasn’t a dream. It was an upload.”

Abbie wakes in a hospital bed with no memory of how she got there. The man by her side explains that he’s her husband. He’s a titan of the tech world, the founder of one of Silicon Valley’s most innovative startups. He tells Abbie she’s a gifted artist, a doting mother to their young son, and the perfect wife.

Five years ago, she suffered a terrible accident. Her return from the abyss is a miracle of science, a breakthrough in artificial intelligence that has taken him half a decade to achieve.

But as Abbie pieces together memories of her marriage, she begins questioning her husband’s motives – and his version of events. Can she trust him when he says he wants them to be together for ever? And what really happened to her, half a decade ago?

A gripping psychological thriller, perfect for fans of The Woman in the Window and The Wife Between Us.

Abbie is an AI or “cobot” created by Tim Scott at his robotics company. What is odd about her is that he has made her into the image of his missing wife, complete with her looks and memories. When I started reading the Perfect Wife, I did get a slight sense of déjà vu as on the face of it the initial premise did resonate with a book that I had read previously and thoroughly enjoyed. As I got further into the book however it took on a more sinister vein.

As the book takes you between the years prior to Abbie’s disappearance and the present as the AI starts to integrate into family life you get to see that maybe all was not rosy in the Scott household. Tim is actually quite controlling both at work and at home and as the AI starts to download more memories and piece together bits of her human life you start to wonder if her disappearance was all that it seemed. Was it an accident as originally believed five years before, was it staged, or was it something far worse??

Despite being a robot…albeit a highly intelligent one, I did find myself kind of liking Abbie as she tried to connect with Danny, encouraging him to make decisions and dealing with his autism in the best way she could. In some respects, the fact that she was a robot helped with this as it didn’t matter to him that she was different. She also wanted to find out for herself what happened on that fateful night especially when she started receiving text messages from an unknown person.

I am not normally a fan of sci fi but when it comes to AI it does make you stop and think. In a world where we are always looking to cure illnesses and finding a way to preserve life the chilling statement made by Tim about Abbie’s memories living on and people essentially becoming immortal as technology progresses and downloading the data into the next new improved generation of AI maybe fiction isn’t far away from possible fact. I can understand that in certain aspects of life robots are essential but when it comes to human interaction and caring is that a step too far and if not, what does it say about us as a society? In the Perfect Wife, Delaney does throw these questions into the face of the reader whilst also providing suspense and mystery.

If you are a fan of the author’s previous work or love books that make you wonder about what is possible in the world of technology, then I think you will love this.

JP Delaney is a pseudonym for a British writer of psychological suspense who has previously written best-selling fiction under other names. THE GIRL BEFORE was an instant New York Times and Sunday Times bestseller and was published in over 40 countries. The follow-up, BELIEVE ME, was also an international bestseller. THE PERFECT WIFE will be published summer 2019. For more information, go to www.jpdelaney.co.uk or follow @jpdelaneywriter on Facebook.