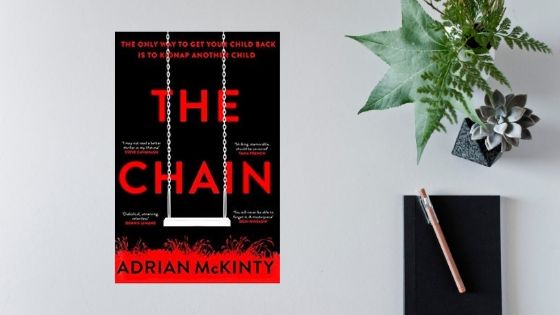 Today I am delighted to be taking part in the blog tour for The Chain by Adrian McKinty. Thanks go to Tracy Fenton of Compulsive Readers for inviting me to join ‘the chain’ and to publisher Orion for providing a copy of the book for review. Here is what it’s all about:

YOU WILL BECOME EACH ONE.

A STRANGER HAS KIDNAPPED YOUR CHILD.

TO FREE THEM YOU MUST ABDUCT SOMEONE ELSE’S CHILD.

YOUR CHILD WILL BE RELEASED WHEN YOUR VICTIM’S PARENTS KIDNAP ANOTHER CHILD.

IF ANY OF THESE THINGS DON’T HAPPEN:

YOUR CHILD WILL BE KILLED.

YOU ARE NOW PART OF THE CHAIN

Chain letters. We’ve all seen them. Some of you may have even received them. Vile things, preying upon the superstitious, the weak and the vulnerable. Why people think that they are any kind of entertainment is beyond me. As a means of extortion though they, sadly, can be very effective. With The Chain, author Adrian McKinty has taken this notion and kicked it up a notch, bringing it squarely into the realms of the insta-generation. The world in which our ‘connectivity’ makes us all potential targets and easily trackable, and even hackable, victims.

Imagine the scene. You are a parent. You receive a call telling you that the person on the end of the line has kidnapped your daughter, and the only way you can free her is to take someone else’s child until they, in turn, take another. And so the cycle goes on. Yes, there is a financial impact, a ransom which must also be paid, but said ransom is secondary to maintaining the integrity of this new, grotesque form of chain letter. Sends chills right through you doesn’t it?

This is exactly what happens to Rachel, whose daughter, Kylie, is kidnapped whilst waiting for her school bus. This sets off a chain of events which sees Rachel doing all she can to see her daughter’s safe return and to bring the perpetrators to justice, even if it means a fight to the death.

Rachel is an intriguing character. Having recently gone through cancer treatment, she is a much stronger person than her body may portray, and she has a resolve and strength of spirit which can definitely be envied. The author chose well in creating her as the central character, and as she moves between despair and determination her passion is believable, even if she is not always likeable. Don’t get me wrong. I had sympathy for her situation, but didn’t always feel in tune with her character.

She doesn’t do it all on her own. She has help from her ex brother in law, Pete, a man with his own demons to battle. Former Army, Pete has an addiction which he needs to constantly feed to keep his own nightmares in check. He was perhaps more likeable as a character than Rachel, but ultimately just as flawed. As for Kylie. Well, she’d obviously inherited her mother’s spirit as, despite her captivity, she had a great deal of fight and common sense within her, way beyond her years. If anyone, she was the one I felt for the most, and perhaps the most sympathetic character in the whole book, retaining a humanity which appeared lost amongst the adults in the room.

The book is effectively separated into two halves. Part one deals in Kylie’s abduction and return, part two in the aftermath. Where as part one felt slow and deliberate, packed with tension but ultimately thought provoking, part two felt much faster to read, the action ramping up as we gallop towards a conclusion. For me, although slower, the first half of the book was actually stronger. It dealt far more with the emotional turmoil of being forced to act far outside of your moral code, and examined how far a family would go for their child. It forced you as a reader to think about what you would do in similar circumstances and made for uncomfortable and chilling reading at times. It makes your skin crawl, seeing what being part of the chain did to some of the characters and how far they were willing to go to see their children safe, but it never once crosses the line that would take it into unpalatable territory.

The second half of the book, in which we got to know the people behind ‘the chain’ is where the story took a fantastical turn that forced me to suspend disbelief a little more than the first half. Some of the situations seemed a little convenient, perhaps, on occasion, a little predictable. There is a fantastic showdown at the end that will get the adrenalin pumping and keep you on the hook, especially if you are looking for a faster pace. I just wasn’t entirely convinced by the motives, or even the characters, who were behind the scheme. I had guessed who one of the key characters was very early in the second half, but there is enough doubt still cast to keep most readers guessing and second guessing themselves.

The quality of the writing is never in doubt and this is a very assured piece of work which put me right in the heart of the action. The setting was spot on, a mixture of both the urban and rural landscapes, dank and oppressive atmospheric conditions which added to the tension and really made the story work. I don’t think this could have been set anywhere other than America but the author chose wisely taking it just outside of the city as it fed into the anonymity of the scheme but also the danger of discovery as the town Rachel comes from is still a fraction too close knit for her own part in the chain to run entirely smoothly.

The book didn’t entirely click with me in the way it has for other readers, perhaps because I’m not a parent, perhaps because I’m just a heartless moosebag, or perhaps because the kidnapping element was resolved by half way through the book. You know then that there is always going to be the chance of a (moderately) happy ending, even if it’s clear that more action and revelations are to come. I enjoyed the book, and it’s a good four star read for me, but I read a book with a very similar premise a couple of years ago, and I suppose I was just looking for that killer edge that didn’t quite happen, in order to nudge it a little higher up the star chart.

That said, this book is no doubt going to be a big hitter this summer, in part down to a great social media campaign in which we are all part of ‘the chain’ ourselves just by virtue of talking about the book. It’s already proving popular amongst my fellow readers, so why not decide for yourselves?

Dare you become part of ‘The Chain’?

Adrian McKinty is a crime novelist from Belfast, Northern Ireland.

His books have won the Edgar Award, the Anthony Award, the Ned Kelly Award and the Barry Award. Adrian is also a two time Dagger nominee and shortlistee for the Theakston Crime Novel of the Year.