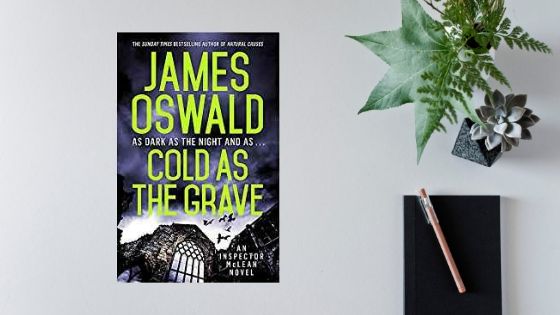 It is my absolute pleasure to be joining the blog tour for the paperback release of Cold As The Grave, the ninth and latest brilliant episode in the Detective Inspector Tony McLean series by James Oswald. An opportune time to say “Happy publication day Mr Oswald” as this little wonder makes its paperback debut today!

I am a bit of fan of the series and the eagle eyed amongst you may have spotted that I actually featured a review of the book earlier in the year to coincide with the hardback release, which can be found here. Thanks to the lovely Anne Cater of Random Things Tours and publishers Wildfire Books, I get to cheer the book’s fabulousness all over again by sharing an extract from the book with you all. But first, here is what the book is all about:

The ninth book in the Sunday Times-bestselling phenomenon that is the Inspector McLean series, from one of Scotland’s most celebrated crime writers.

Her mummified body is hidden in the dark corner of a basement room, a room which seems to have been left untouched for decades. A room which feels as cold as the grave.

As a rowdy demonstration makes its slow and vocal way along Edinburgh’s Royal Mile, Detective Chief Inspector Tony McLean’s team are on stand-by for any trouble. The newly promoted McLean is distracted, inexplicably drawn to a dead-end mews street… and a door, slightly ajar, which leads to this poor girl’s final resting place.

But how long has she been there, in her sleep of death? The answers are far from what McLean or anyone else could expect. The truth far more chilling than a simple cold case…

If only it wasn’t so cold.

She remembers a land of sun and heat, desert sand spreading away from the city in all directions. Night could be freezing, out beyond the ancient walls, but home was always warm. Narrow cobbled alleys, the smell of spices and street food. Dawn prayers called from a thousand minarets, bringing life to another new day. These and countless other happy memories taunt her as she huddles in the dark corner, shivering, alone and afraid.

She hugs her knees to her chest, wraps herself tight against the wind that whistles through this old building. So unlike the places she knew growing up. What’s left of them now? No more than rubble soaked in the blood of her friends and family.

Around her neck, the amulet hangs like a dead weight. She remembers her grandmother’s solemn face as she gave it to her, remembers the words she spoke: ‘Keep this with you at all times, littlest one. It will summon protection when you need it most.’ There have been many times since then when she has needed its protection, and yet none has ever come. Still, it is a reminder of home. The only one she has left.

A noise like thunder, and lightning chases away the darkness as a door on the other side of the room is kicked open. She clamps her mouth shut against the chattering of her teeth, longs for the sun and the warm breeze blowing in across the desert. Longs for a place where the air doesn’t freeze your breath, and the rain doesn’t turn to ice as it falls from a sky painted purple like a bruise. She is so cold she thinks she will die here, long before the demon claims her soul. Knowing that those are her two options forces a tiny sob from her throat.

‘I know you are here, my sweet little thing.’

It speaks in the language of her dead father, the words of the Imam, the voices of the hard-faced men who jostled her and her mother onto a tiny boat and set it sailing into the wide sea. It is all the people who have promised her freedom while taking it away. She shoves one hand into her mouth, bites down on her knuckles and tries not to breathe. The other reaches for the amulet, its ruby crystal warm to her touch as if a fire burns within it.

‘Come out now, child. There is no point in hiding.’

It is closer now, she can hear. Its tone is beguiling, but she knows better than to believe its lies. She has heard too many now to fall for them again. All she can do is sit motionless, hoping against hope that it won’t see her in the gloom. And now she can smell it, too. The sickly-sweet musk of rotting bodies, the sharp tang of freshly spilled blood, the sting of gun smoke. She hardly dares breathe lest its stench make her sneeze. She must not be found. She cannot be found.

‘You are close, my pretty. I can taste you on the air. So much fear.’ A pause, and she hears the animal grunts as it sniffs out her scent. ‘Why do you fear me so?’

She almost answers, such is the power behind its questioning.

Tears run through the dirt on her cheeks, snot dribbles from her nose but she dares not wipe it away. She is petrified like the ancient statues her father took her to see in the desert. The old city ruined, reclaimed by the sand. Is that how they came to be stone? Did this demon exist even then? Steal their souls like it will surely steal hers? She grips the amulet tighter still, feels the thin cord around her neck snap.

A floorboard creaks, shifting under weight. It’s close, she under- stands. Too close. She sees the door through which she came, a thin strip of light making the shadows even deeper. She ran here across an unfamiliar city, following her instincts, trusting them to take her to safety. How foolish to think it would be that easy, after all this time. The demon knows her intimately, has her scent. She can’t hope to escape it. Not now, not ever.

She sees motion in the darkness, and it turns its head towards her, a black shape even darker than the shadows. Twin circles of dullest red hover in the air. Like iron heated in the forge until it begins to glow, they smoulder and smoke. They move slowly, passing over her once, twice. She almost believes she has escaped, but then they pass a third time, stop. The iron glows bright and all she can see is flames.

‘Ah, my sweet little girl. There you are.’

She cannot move, cannot scream. There is no hope for her, and no protection comes. There is only the amulet falling from her grasp, tumbling to the stone floor and smashing into a million pieces. And if they billow into a tiny flame before vanishing altogether, she does not see.

She is already dead.

How chilling is that? Believe me, it only gets better from here as that’s only the opening chapter. If you’d like to read more, follow one of the buy links above and you can bag your very own copy. You won’t regret it.

JAMES OSWALD is the author of the Sunday Times bestselling Inspector McLean series of detective mysteries, as well as the new DC Constance Fairchild series. James’s first two books, NATURAL CAUSES and THE BOOK OF SOULS, were both short-listed for the prestigious CWA Debut Dagger Award. AS COLD AS THE GRAVE is the ninth book in the Inspector Mclean Series.