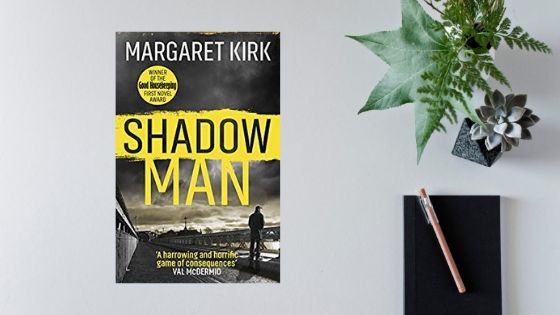 Today I am delighted to share my thoughts on Shadow Man, book one in the Lukas Mahler series by Margaret Kirk. Really I should be apologising as I’ve had this book on my tbr for a couple of years now and, quite frankly, I should have known better. I’ve been missing out. Before I tell you what I think, here’s what the book is all about:

Two sisters
Just before her wedding day, Morven Murray, queen of daytime TV, is found murdered. All eyes are on her sister Anna, who was heard arguing with her hours before she was killed.

Two murders
On the other side of Inverness, police informant Kevin Ramsay is killed in a gangland-style execution. But what exactly did he know?

One killer?
As ex-Met Detective Inspector Lukas Mahler digs deeper into both cases, he discovers that Morven’s life was closer to the Inverness underworld than anyone imagined. Caught in a deadly game of cat and mouse, is Lukas hunting one killer, or two?

I do loves me a little bit of Tartan Noir. Let’s face it, any kind of noir keeps me happy, but dress it in a kilt and top if off with a Scottish accent and I’m doubly happy. Okay. Maybe forego the kilt in favour of trousers, but otherwise, I’m there. It’s not often I get to read a cracking series set up in Inverness so delving into the world of Lukas Mahler and his colleagues came as an absolute treat.

This book is full of intrigue and mystery. Returning home for her sister’s wedding, nothing could prepare Anna for what she is about to find when she goes to her sister, Morven’s, suite the next morning. Morven’s murder is brutal enough, but with her being such a well known figure, it adds an extra layer of pressure to the investigation, not making life any easier for Detective Inspector Lukas Mahler. Which is absolutely brilliant for us as readers, as who wants an easy to solve murder mystery anyway?

What I really liked about this book is the way in which the author sets the scene so perfectly that you feel as though you are right there. Be it the grounds of a grand country estate, the narrow winding roads up to the remote highlands, or even just the centre of Inverness, Margaret Kirk has created such a vivid landscape that it just made me feel a part of the action. I’ve been to the city a few times on business and even I recognised some of the areas being described, and understood the different pace of life that Mahler and his team were working in compared to your typical inner city murder mystery. Murder is out of place in Inverness, and two murders in quick succession, likely by the same perpetrator is unheard of. This contrast just adds another layer of tension to a story already brimming with it.

I loved the characters in this book, especially Mahler, and I can see him quickly becoming one of my favourite authors. He has a very complicated personal life which we really just scratch the surface of in this book, but his protective nature towards his mother is really quite touching, if a little stained at times, and it really helps you bond with him as a character. Mahler is partnered with family man Detective Sergeant Iain Ferguson, or Fergie, and finds himself in regular conflict with Detective Sergeant Karen Gilchrist, who is ambitious and keen to prove her worth by solving a hit and run style execution and resentful of Mahler being made SIO. The pair keep him on his toes and provide perfect balance. I look forward to learning more about all of them as the series progresses. It’s a strong team, all with flaws and quirks, but not a single character out of place or overplayed.

The story itself is tense and atmospheric, the murders quite chilling. Motives are not exactly clear from the start and the author keeps the reader on the hook by interjecting the action with scenes told from the killer’s point of view. It keeps their identity hidden, but leaves us asking all kinds of questions and bringing new suspects to the fore with each page turn. Morven was not a well liked woman, no matter how popular a TV star she may have been, and with so many people on her world having motive to murder her, it’s hard to tell just who it is right up until the end. I had my suspicions, but you’ll need to read for yourself to see if you can work it out.

Now one of the things that worked well in this book was the chemistry between Anna and Mahler. It wasn’t too overt, just a frisson of tension between them. They are two very different people from very different worlds but when you scratch beneath the surface it is clear that they share more in common than they might have realised. They seem to bring out the best and worst in each other, but the attraction is there, keeping readers on the hook right up until the end. Loved it.

All in all, a cracking start to the series, full of brilliant characters, atmosphere, tension and mystery. I can’t wait to get stuck into book two now. Thankfully, it is already in my TBR so I won’t have to!