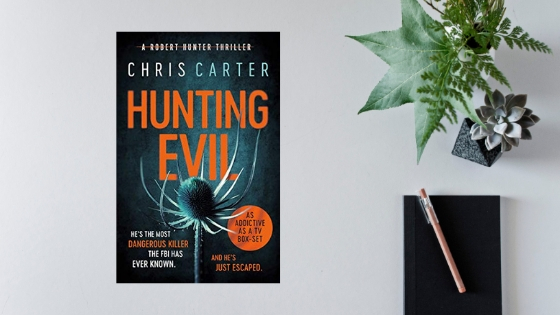 Today it is my great pleasure to be joining the blog tour for Hunting Evil the latest Robert Hunter thriller from Chris Carter. A huge thank you to Anne Cater of Random Things Tours for inviting me to join in, and to publishers Simon & Schuster for the advance copy for review. Here is what the book is all about:

‘Every story one day comes to an end.’

As roommates, they met for the first time in college. Two of the brightest minds ever to graduate from Stamford Psychology University.

As adversaries, they met again in Quantico, Virginia. Robert Hunter had become the head of the LAPD’s Ultra Violent Crimes Unit. Lucien Folter had become the most prolific and dangerous serial killer the FBI had ever encountered.

Now, after spending three and a half years locked in solitary confinement, Lucien has finally managed to break free. And he’s angry.

For the past three and a half years, Lucien has thought of nothing else but vengeance.

The person responsible for locking him away has to pay, he has to suffer.

That person … is Robert Hunter.

And now it is finally time to execute the plan.

First things first – housekeeping. Now this is book ten in the long running Robert Hunter series and the purists out there would say that you should always read series books in order. Rebels, like me, would say, meh. Read however you want. Dip in an out, it’s all good.

However, this book is really a follow on from book six, An Evil Mind, and even the author himself prefaces the story by saying this is the first book where he would recommend that you read the other book first in order to fully understand the complexities of the relationship between Hunter and his foe, Lucien Folter. In many ways I would agree with that although, like all books in the series, you can read it as a standalone if you like. Just be prepared for a few things to seem somewhat familiar when you start working your way backwards to catch up with what happened first. And besides, Lucien is such a deliciously evil and intelligent antagonist why wouldn’t you want to meet him as soon as you can.

Unless you’re one of his victims that is. In that case highly recommended that you avoid him like the plague. He is one sick puppy. Like all Chris Carter books, Hunting Evil doesn’t shy away from the more violent or grimace producing forms of murder. That’s not to say any of this is gratuitous, far from it. The action is kept off the page, but the fallout, physical and mental, is made very clear to readers so if you are looking for warm and fluffy you’ve come to the wrong party. But again, as is typical of a Chris Carter book, this isn’t simply about tapping into the darkest deeds that one man can do to another. This series is far beyond that – less about the what and far more about the why and its emotional impacts on those who are left with the aftermath.

In Hunting Evil, Lucien Folter, one time friend of our protagonist Robert Hunter, has escaped from a secure prison leaving quite a welcome for the last guard to arrive on the scene. With their shared history, and armed with the knowledge that Lucien is coming for him, Hunter is drawn into a deadly game of cat and mouse that will test his mind, his nerve and the very essence of who he is. Could this be the case that finally breaks him? Poor Hunter. There are things in this book which really knock the wind out of his sails, events which affect not only him but those who are close to him, and moments which will make your heart break for him and his friends and colleagues.

What I love about this series is not only the characters – because, quite frankly, who doesn’t love Hunter and Garcia – but the way in which the author really brings the reader into a discussion, or at least a consideration of what makes the mind of a killer tick. His background in Psychology really shines through but in a way that is accessible for the reader. We are presented with facts, figures, almost textbook profiling, but in a most natural and engrossing way that you are drawn deeper and deeper into the story. And Lucien is one heck of an antagonist. Highly intelligent, darkly cunning and probably the sharpest mind that Hunter has ever come across, so seeing the inner workings of his psyche is strangely hypnotic and extremely chilling.

You have the perfect blend here of psychology, intense and heart stopping action, emotional turmoil and gritty police procedural and it had me hooked from the first page to the last. I don’t want to say too much about the plot but it does become a real battle of wills between the two old friends and with an ever present sense of threat and menace, as a reader it certainly kept me poised on the very edge of my seat. Engrossed but enraged, thrilled but heartbroken. All exciting stuff. One of the most disturbingly absorbing books I’ve read in a while. Definitely recommended.

Chris Carter is a top bestselling author in the United Kingdom, whose books include An Evil Mind, One By One, The Death Sculptor, The Night Stalker, The Executioner, and The Crucifix Killer. He worked as a criminal psychologist for several years before moving to Los Angeles, where he swapped the suits and briefcases for ripped jeans, bandanas, and an electric guitar. He is now a full-time writer living in London. Find out more on at ChrisCarterBooks.com.