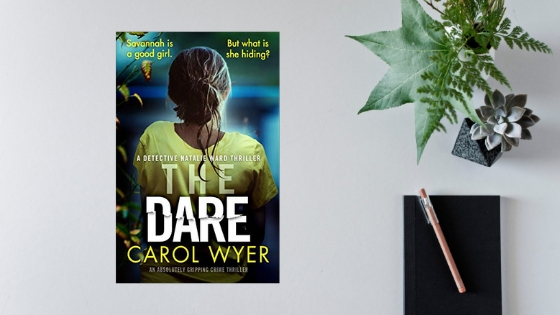 Today it is my great pleasure to be one of the blogs opening up the tour for Carol Wyer’s latest DI Natalie Ward thriller, The Dare. I’ve loved this series since book one and I was thrilled to get an advance read courtesy of publishers Bookouture. My thanks to Kim Nash for inviting me to join the tour and providing the advance review copy. Here is what the book is all about:

Jane’s daughter is a good girl. What is she hiding?

When thirteen-year-old Savannah Hopkins doesn’t come straight home from school, as she always does, her mother Jane immediately raises the alarm.

Leading the investigation is Detective Natalie Ward whose daughter Leigh is the same age as Savannah. Soon Natalie’s worst fears are confirmed when the teenager’s broken body is found in nearby shrubland.

Evidence points towards a local recluse, but just as the net is closing around him, one of Savannah’s friends, Harriet, is reported missing.

As Natalie delves into the lives of both girls, she soon discovers a sinister video on their phones, daring the girls to disappear from their families for 48 hours.

But Natalie isn’t quick enough for this killer, and she is devastated to find Harriet’s body on a fly tip a day later.

Caught up in the case, she takes her eye off her own daughter and when Leigh goes missing after school she knows she must be in terrible danger. The clock is ticking for Natalie. Can she catch this killer before her little girl becomes the next victim?

This gripping rollercoaster of a read will have you up in the small hours turning the pages. Fans of Angela Marsons, Rachel Caine and Robert Dugoni will love The Dare.

Available from: Amazon UK | Amazon US

From the very first book in the series, The Birthday, I knew that this series was going to be something special. I have really grown to love the new team of Natalie, Lucy, Murray and Ian and all of the characters who inhabit their world, and the skilful way in which Carol Wyer creates and develops the characters, be they a regular or one of the more – how shall I put it – expendable characters who dot in and out of the novels, adds to the authentic and compelling nature of each story.

The Dare really taps into the idea of the influence of Social media and the desire of the younger generation to be seen to be strong, brave and right on the edge of whatever mad craze is currently fashionable. In this case, it is the craze for completing challenges of dares, such as the ice bucket challenge, in a bid to garner popularity and some kind of fame status amongst their peers that puts young girls in grave danger.

From the very start of the book you get a sense of the danger that lurks within the pages, portraying the heart of the beast that will tear a community and three families apart. I love the way in which Carol Wyer has set the scene so brilliantly, the imagery quite vivid in terms of how the killer sees themselves, without giving the reader any clues as to who they might be. That is a mystery that will be kept right until the end of the book before the big reveal. This is someone who will make the skin crawl, and with passages told from their perspective littered throughout the book, you get an ever evolving picture of how damaged they are and why they are now choosing the victims they are ultimately pursuing.

From the perspective of a true police procedural, this book has all you could ask for and more. A strong team with a high focus on results, battling against the typical constraints of modern policing in terms of financial management and lack of resources. Natalie Ward is a strong but relatable character who is going through a tough time at home, something which is only set to get worse. Then there is Lucy, just about to start a new family but also focused on her career and being as successful as she sees Natalie to be. They are two very likeable characters and probably take the lion’s share of the attention in terms of this investigation, with Murray and Ian Jarvis taking more of a back seat. there is a fabulous blend of humour and intensity between the characters that I loved as well as a few certain issues with chemistry that keeps rearing its head, and I’m not talking about a mix up at the forensics lab.

I loved the pacing in this story, flexing as it did between the urgency of the hunt for the missing girls and the frustrating periods of waiting for the evidence to be processed, even as the Detectives hit one dead end after another. There are no end of potential suspects to divert attention, but which one of them, if any, is actually guilty? Well you’ll need to read to find out. I had my suspicions, and the more you read, the clearer everything will become. There are moments of real tension, especially when Natalie’s daughter goes missing, and quieter moments when the characters have time to reflect upon what is happening in their personal lives. Carol Wyer has really captured the emotion of the parents who are torn apart by loss, and the anxiety and anger caused by the recriminations of what happens between Natalie and her husband David.

All of this combines to give us yet another stellar read, full of mystery, thrilling action, a chilling killer and a team of Detectives that is fast becoming one of my favourites.

Carol E. Wyer, who also writes as Carol Wyer, is an award-winning author and stand up comedian who writes feel-good comedies and gripping thrillers.

Her book, Grumpy Old Menopause won The People’s Book Prize Award for non-fiction 2015.
The DI Robyn Carter series has earned her acclaim as a crime writer and the first book in the series, Little Girl Lost, shot to the #2 best-selling spot on Kindle #9 best-selling audiobook on Audible, and was also a USA Today top 150 best-seller.
Carol has been interviewed on numerous radio shows discussing ”Irritable Male Syndrome’ and ‘Ageing Disgracefully’ and on BBC Breakfast television. She has had articles published in national magazines ‘Woman’s Weekly’ featured in ‘Take A Break’, ‘Choice’, ‘Yours’ and ‘Woman’s Own’ magazines and the Huffington Post.

5 thoughts on “The Dare by Carol Wyer @carolewyer @Bookouture #review”