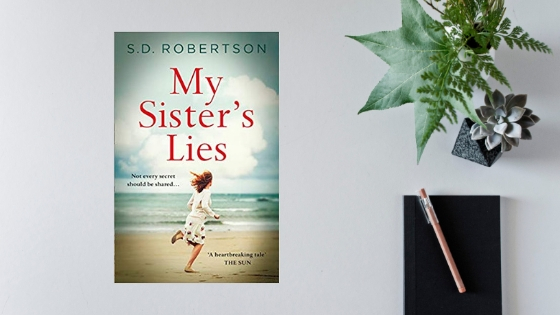 Today it’s my great pleasure to be taking part in the blog tour for My Sister’s Lies by S.D. Robertson. Thanks to Sabah Khan at Avon for inviting me to join the tour. I have a great extract from the book to share with you all. Here’s what the book is all about:

For a decade, Hannah’s life has been pretty close to perfect – she has a great job, she’s married to Mark, and her child-free existence means she’s free as a bird. The only sadness in her life is a fall-out with her sister Diane, who hasn’t spoken to her in over ten years. But now Diane is on her doorstep – and this time, she’s got her teenage daughter Mia in tow.

When Diane asks if Mia can stay with Hannah and Mark for a few days, Hannah is glad of the chance to get to know her niece. But as the days turn into weeks and Diane doesn’t return, Hannah begins to worry. Why hasn’t her sister been in touch?

Diane is carrying a devastating secret that will destroy Hannah’s carefully constructed life. But how much is she willing to reveal – and when will she pick her moment?

An emotional story that delves into the true meaning of family, sisterhood and secrets. Perfect for fans of Kerry Fisher and Adele Parks.

Mark could see her sister for what she was: an adept manipulator, who knew exactly how to wrap unsuspecting people – particularly men – around her little finger. Not that she’d shown much sign of that skill so far today. But why would she in the company of people already wise to her tricks?

Hannah was actually surprised how accommodating Mark was being. He’d made it clear long before the sisters’ falling-out that he neither liked nor trusted Diane – and the way things had ended up, he’d been proved right. Not that he’d ever said so. He wasn’t that kind of man. As for what was going through his head right now, she couldn’t be sure. Hannah didn’t even know what she thought about this weird, uncomfortable situation. It all hinged on what her sister was about to say.

‘So,’ Mark said, sitting back down next to Hannah on the couch and pouring some milk into his coffee.

From the armchair opposite, Diane cleared her throat before finally beginning to talk.

‘Right,’ she said. ‘I’m sorry it’s taken so long for me to get to the point, but, as I mentioned earlier, I really wanted to wait for Mia to be out of the way. This isn’t a conver­sation for her ears.’

She paused to take a sip of her tea as the others watched in silence.

‘So you’re probably wondering what I’m doing here after all this time. You must think I have a right nerve turning up like this – I get that. But here I am anyway and, as you’ve probably guessed, I need to ask for your help.’

Diane stood up and walked over to the window. She stared out over the city and gave a dramatic sigh, leading Hannah and Mark to flash each other a confused sideways glance.

‘I’ve missed this place,’ she went on, continuing to gaze outside with her back to the others. ‘I didn’t think I would, but it’s true what they say: home is where the heart is. It’s been far too long . . .’

Diane paused again, running a hand through her short hair. Hannah could feel Mark getting edgy, his knee jumping up and down next to her. She was on the verge of saying something herself – telling Diane to stop messing around and get to the point – when her sister turned back to face them with tears running down her face.

Former journalist S.D. Robertson quit his role as a local newspaper editor to pursue a lifelong ambition of becoming a novelist.

An English language and literature graduate from the University of Manchester, he has spent time living in France, Holland and Australia, working in roles as diverse as a holiday rep, door-to-door salesman, train cleaner and mobile phone network engineer.

Stuart’s love of writing and inquisitive nature led him back to university to study journalism. He went on to work at various newspapers in Lancashire and Greater Manchester, rising from trainee reporter to editor in just five years and remaining in the hot seat for another four.

Eventually, in the face of major cutbacks – and after somehow convincing his wife to swap roles and return to her career – he chose to leave. This life-changing decision granted him the golden opportunity to write fiction while spending much more time at home with his family.

Stuart lives in a village near Manchester with his wife and daughter. There’s also his cat, Bernard, who likes to distract him from writing – usually by breaking things.

One thought on “My Sister’s Lies by S.D. Robertson @SDRauthor @AvonBooksUK #extract”