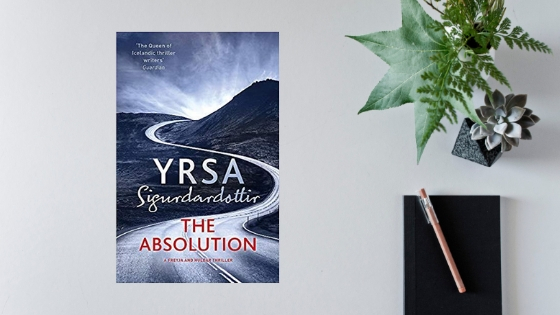 Today it is my great pleasure to share my thoughts on the brand new Freyja and Huldar Children’s House thriller from Yrsa Sigurdardottir, The Absolution. I love this series so was thrilled to be able to sneak in an early read of the book. My thanks to publisher Hodder & Stoughton for providing me an advance copy for review. And happy publication day to Yrsa Sigurdardottir too. Here is what the book is about:

All he wants is for them to say sorry.

The police find out about the crime the way everyone does: on Snapchat. The video shows the terrified victim begging for forgiveness. When her body is found, it is marked with a number 2…

Detective Huldar joins the investigation, bringing child psychologist Freyja on board to help question the murdered teenager’s friends. Soon, they uncover that Stella was far from the angel people claim – but even so, who could have hated her enough to kill?

Then another teenager goes missing, and more clips are sent. Freyja and Huldar can agree on two things at least: the truth is far from simple. And the killer is not done yet.

A brilliantly suspenseful story about the dark side of social media, The Absolution will make you wonder what you should have said sorry for…

Losing a child is quite possibly every parent’s worst nightmare, but that is exactly what is facing Stella’s parents after the teenager disappears from the cinema where she works part time. Worse than that, all of Stella’s friends have been sent a series of increasingly disturbing Snapchat videos, the level of Stella’s fear growing with each new Snap that is received. Coupled with a very sinister recording that is retrieved from the Cinema’s security video, it is clear that Stella’s days are numbered – well, less days, more minutes.

I love the way that, with each book, Yrsa Sugurdardottir manages to completely captivate me and draw me into her dark and deadly world. You can feel the tension building from the very first page and that ominous feeling lodges itself in the pit of your stomach, staying out until you turn the last page. The Absolution is no different and I could tell as Stella primped and preened herself at the end of her shift, that she was not going to make it far beyond the opening chapter. I have to be honest, despite knowing that something was going to happen, I wasn’t quite expecting that.

None of the books in this series have shied away from tackling very weighty subjects, and the murders have been quite dark and often disturbing. Now the manner of dispatch of the victims in this book may be more straightforward than its predecessors, the circumstances are no less harrowing. Seeing your child or friend murdered practically live on social media is the kind of thing which will leave an indelible mark upon all who witness it, and the seemingly simple method of murder makes the story all the more believable and disturbing as a result. I actually could imagine someone acting in the way the murderer did, and that made my skin crawl and added to the tension within the story.

As well as incredible tension, Yrsa Sigurdardottir creates some truly brilliant characters. Huldar has been a firm favourite of mine since book one, and the chemistry between him and Freyja is undeniable but, so far, unexplored. They play off each other brilliantly but whilst Huldar would happily engage in something more, Freyja is determined never to let it happen for a whole host of reasons. Alongside the pair you have a whole cast of characters, police officers and suspects, who are so well drawn you can imagine each and every one. There is Huldar’s boss, Erla, who continues to make his life hell, reluctant to even engage with Huldar unless she has a dog of a job to dole out. Then there is his partner Gudlaugar, who continues to suffer as a result of being associated with Huldar, the office pariah.

This time the central theme of the book s bullying, but who is being bullied and by whom? Needless to say that the teens in this book are all hiding something, in the way that only teens can, and nothing is quite as straight forward as it seems. And with the victims coming from different schools, with no apparent link between them, the ulterior motive of the killer takes a while to come to light. As the investigation progresses there are no end of suspects, and no matter where you look someone seems to be harbouring a secret, even Huldar’s colleagues. So while you will know the why quite early on, the who will take a lot to work out.

We are faced with a lot less of Freyja in this story than in previous books, but when she does appear she makes an impact, her own history playing into the central theme perfectly. Each scene is skilfully set to create tension and mystery, keeping me on edge and leaving me wondering – what next? Another cracking story in a brilliant series. I can’t wait for the next one.

Yrsa Sigurdardottir is an award-winning, best-selling crime novelist from Iceland. She began her career writing humorous novels for children but made her crime fiction debut in 2005 with Last Rituals, the first installment in the Thóra Guðmundsdóttir series. Her novels have been translated to 35 languages and in the UK she is published by Hodder. Her work stands “comparison with the finest contemporary crime writing anywhere in the world” according to the Times Literary Supplement.

In addition to several stand-alone thrillers Yrsa has embarked on a new series featuring policeman Huldar and child psychologist Freyja. The first book in this series is The Legacy, published by Hodder UK in 2017, followed by the second installment The Reckoning in 2018. The Legacy received the Icelandic Crime book of the year award when it came out and went on to win the Danish prize for best translated crime fiction the following year. In 2015 Yrsa received the UK Petrona Award for best Scandinavian crime novel for Silence of the Sea.

A movie based on her standalone horror novel, I Remember You was premiered in 2017, while adaptation of the Thóra series for English language television is underway.

Yrsa is also a civil engineer and still works as such on geothermal and hydro power plant projects in her native Iceland.

2 thoughts on “The Absolution by Yrsa Sigurdardottir @YrsaSig @HodderBooks #review”