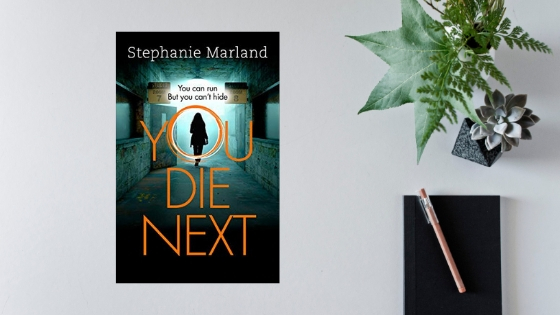 Today it is my great pleasure to take part in the blog tour for You Die Next the latest Starke and Bell thriller from Stephanie Marland. My thanks to publisher Trapeze Books who provided an advance copy for review and for inviting me to join the tour. Here is what the book is about:

When a group of urban explorers stumble across a murderer’s kill room in a derelict film studio, terror strikes. And when one of the group is found dead, the team realise – they’re being hunted.

DI Dominic Bell is investigating the murder, but as the body count rises, time is running out. The only person who can help him is a figure from his past, Clementine Starke – but Clementine is haunted by her own demons. Can the two of them pair up to catch the killer? Or is it already too late?

A cat-and-mouse thriller perfect for fans of Sarah Hilary and Rachel Abbott. Read it if you dare!

I’m a big fan of Stephanie Marland’s work and so when the opportunity arose for an early read of the book, I didn’t hesitate. Dominic Bell and Clementine Starke were amongst my favourite characters in 2018 and I was really looking forward to seeing what fresh nightmare awaited them this time around.

I was not disappointed. The author pulls the reader in from the off, creating dark and tense atmosphere with a huge amount of suspense as a group of Urban Explorers break into an abandoned movie studio. They aren’t prepared for what they find, or for all that will follow, but as a reader I knew that I was in for one heck of a ride.

This is a story about obsession, a theme which manifests on so many levels, Firstly there is that of the group of explorers who are so determined to grow their social media audience and find a kind of cyber celebrity status which sees them making some very unwise and deadly decisions. Then there is the obsession of the person who is tracking them but as to who it is and what it is that drives them, the secret is very cleverly disguised, not being revealed until the dying moments of the book (no pun intended). Finally we have Clementine Starke, a woman whose academic study is literally on the topic of obsession. Only she is one of her own subjects, her already unhealthy obsession with DI Bell only growing stronger as the story progresses.

Now the chemistry between the lead characters is as strong as ever, but the author has cleverly thrown in some pretty major obstacles to keep the two apart, increasing the tension and the level of anticipation as a result. These are two fascinating characters, and the more I spend time with them, the more I want to know. They are both damaged by events from their past, both seeking answers to questions which may well put their lives in danger. Despite Bell’s determination to keep his and Clementine’s lives separate, there are forces at play which make this virtually impossible. Their relationship, though strained, is addictive, both of them bringing out the best, and worst, in each other. Clementine is an academic and true crime fanatic – determined, perhaps even a little neurotic, and a complete anti-hero. Bell, as a Police Officer, is the exact opposite – restrained, focused, and keen to play things by the book. They are a brilliant pairing. Love them.

As well as the murders, there are elements of the story which carry over from book one in the series and which are not fully resolved here either. But this only makes me hungry for the next book in the series. With some heart stopping moments throughout, this is a book which kept me on high alert. It also made me wonder, in a world dominated by reality tv and with the internet creating new media stardom every few seconds, just how far would people be willing to go to pursue notoriety and fame? With stories that seem to be getting progressively darker, I cannot wait to see where the author leads us next.

Stephanie Marland has worked in the University sector for over ten years and published research on how people interact and learn together in virtual environments online. She’s an alumni of the MA in Creative Writing (Crime Fiction) at City University London, and an avid reader of all things crime fiction, blogging about books at http://www.crimethrillergirl.com. Steph also writes the Lori Anderson action thriller series (as Steph Broadribb) for Orenda Books, the first book Deep Down Dead is out now.