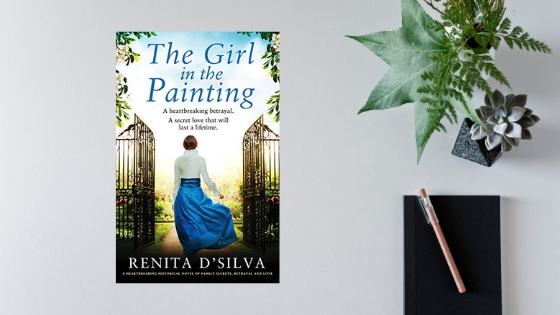 Today I hand back to Mandie who has a blog tour review of The Girl In The Painting by Renita D’Silva. Thanks go to Bookouture for providing an advance copy for review and inviting us to join the tour. Here is what the book is about:

India, 1926: English Margaret arrives with her new husband Suraj at his family home, set amidst beautiful rolling hills, the air filled with the soft scent of spices and hibiscus flowers. Margaret is unwelcome, homesick and lonely, but her maid Archana, a young woman from an impoverished family, reminds her of her long-lost sister, a tiny glimpse of home in a faraway place.

As Margaret and Archana spend more time together, an unexpected friendship blooms. But in British India the divide between rich and poor, English and Indian, is wide, and the clash between Margaret’s modern views and the weight of tradition on Archana will lead to devastating results…

England, 2000: When Emma’s grandmother gives her a mysterious painting, and asks her to take a message of forgiveness to an old friend in India, Emma is relieved to have some time and space to make a decision about her future. But as she fulfils her grandmother’s wish, a secret kept for over seventy years is finally revealed – the story of a day spent painting by a stream full of water lilies, where a betrayal tore three lives apart forever…

Perfect for fans of Kathryn Hughes, Lucinda Riley and The Storyteller’s Secret, Renita D’Silva’s exquisite novel explores the strength it takes to do what is right, no matter the cost.

The Girl in the Painting takes us between England and India in the early 1900’s right up to the modern day. Margaret has a fairly comfortable life in England with her sisters and her parents until tragedy strikes changing her life dramatically. Archana is not so lucky with her life in India. Her family is poor and with her issues with her leg and the colour of her skin mean that her marriage prospects are not that good. Their paths will cross and this meeting will change their futures in ways neither of them would ever expect.

The book alternates between Margaret’s and Archana’s lives until they finally meet after Margaret marries and moves to India with her husband. This gave me chance to really get involved in their lives, making me want to keep picking up the book to see how their stories would eventually become one. Margaret was quite a strong character and despite everything that life had thrown at her in a short time, she was determined to find her own happiness and fight for the happiness of others. This belief ultimately backfired on her and cost her more than she would ever imagine. Her actions were ones that at some point we are all guilty of, where we think we know best, without actually considering those it will ultimately affect. It is this that makes her just that little bit more real. Archana spends most of her life trying to make up for her own shortcomings and the actions of her elder sister which resulted in Archana’s marriage to an older man whose parents thought that ultimately they were bestowing a great favour on her by consenting to this marriage. You could not help but feel for her and the way she was treated by her in laws doing only as they told her and almost abandoning her own mother.

I was a little confused at the start as to where the character of Emma really fitted in and for the most part she was only really a bit player. Towards the end however, the author showed why she was important and how she helped bring the story of Margaret and Archana to its conclusion. Renita D’Silva has a way with her writing that manages to transport you to a different place and era, really giving the reader a sense of how things used to be. For me it gave me an insight into old Indian customs that I never knew existed.  The practice of Sati was not something I was ever aware of and I think that some would even find it shocking. The book does go between the past and present but unlike with some other books I have read that use this style, it didn’t distract or confuse me. This is the first book I have read by this author but having now been introduced to her work I am sure it won’t be the last one.

Renita D’Silva loves stories, both reading and creating them. Her short stories have been published in ‘The View from Here’, ‘Bartleby Snopes’, ‘this zine’, ‘Platinum Page’, ‘Paragraph Planet’ among others and have been nominated for the ‘Pushcart’ prize and the ‘Best of the Net’ anthology. She is the author of ‘Monsoon Memories’,’The Forgotten Daughter’, ‘The Stolen Girl’, ‘A Sister’s Promise’, ‘A Mother’s Secret’, ‘A Daughter’s Courage’, ‘Beneath An Indian Sky’.

Today Mandie shared her thoughts on The Rise And Fall Of The Miraculous Vespas by David F Ross.
Sharing my thoughts on Rabbit Hole, the brand new thriller from Mark Billingham.
Happy publication day Joy Kluver as Broken Girls is out today:
A spot of review catch up as I share my thoughts on Mimic by @danielcolebooks
A lovely surprise gift box from @ljross_author today.
I haven’t made it to Harrogate this year, but I have received some lovely #bookpost from the wonderful @zaffrebooks today - The Unwilling by John Hart. I am very happy about this. 😄 Out today in hardback, here’s what it’s all about: