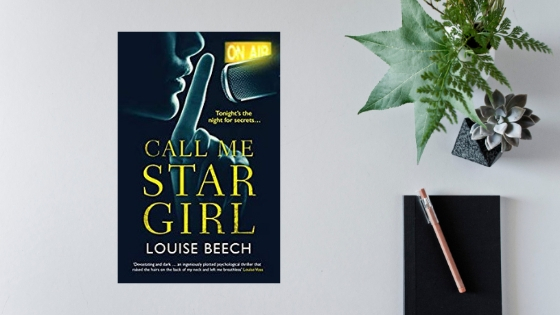 Today it is my great pleasure to be taking part in the blog tour for Call Me Star Girl by Louise Beech. I’m a huge fan of Louise’s work and was so excited to get my hands on an early copy of her brand new thriller. A huge thank you to publisher Orenda Books for feeding my addiction and to Anne Cater for inviting me to join the tour. Here is what the book is all about.

A taut, emotive and all-consuming psychological thriller, reminiscent of Play Misty for Me … from the critically acclaimed author of Maria in the Moon and The Lion Tamer Who Lost…

‘As twisty and deadly as barbed wire, this book will leave you breathless’ Erin Kelly

Stirring up secrets can be deadly … especially if they’re yours…

Pregnant Victoria Valbon was brutally murdered in an alley three weeks ago – and her killer hasn’t been caught.

Tonight is Stella McKeever’s final radio show. The theme is secrets. You tell her yours, and she’ll share some of hers.

What Stella really wants to know is more about the mysterious man calling the station … who says he knows who killed Victoria, and has proof.

Tonight is the night for secrets, and Stella wants to know everything…

With echoes of the Play Misty for Me, Call Me Star Girl is a taut, emotive and all-consuming psychological thriller that plays on our deepest fears, providing a stark reminder that stirring up dark secrets from the past can be deadly…

I have spent a long time thinking about this book. About what I want to say or how I can go about expressing my feelings having finished it. This isn’t a bad thing – it’s actually typically my default position when finishing a book by Louise Beech to be fair. There is something about her writing which does tend to leave a reader reeling at the end of the book, typically through a complete manipulation of your emotions, but also because of the beautiful and hypnotic use of language throughout. Call Me Star Girl manages all of this and more but I was left with a different kind of problem too. How to define the book to an audience yet to become acquainted.

The book is billed at the author’s first thriller and, to a degree, I would agree that this is exactly what it is. It has all the hall marks of a typical psychological thriller – mystery, suspense, deep rooted secrets and a the slow manipulation of the reader as you start to come to grips with the inner reaches of the protagonist, Stella McKeever’s, mind. You know from the very start that there is far more going on in this book that Stella’s last night on her late night radio show, or a seeming fascination with the death of a young woman in the area a few weeks earlier. And it is this gradual realisation which dominates the book and keeps the reader enthralled until the end. What is Stella hiding, and what does Stella’s mysterious midnight caller really know about what happened to Victoria Valbon.

The story is told from a dual timeline perspective – Stella’s present mixed in amongst memories from her past, from the time when her mother abandoned her and left her with their neighbour. Stella and her mother a newly reunited, but why she has chosen now to reenter Stella’s life and what it is that she really wants, is revealed only piecemeal and is quite shocking as the truth becomes apparent. And this is where Louise Beech’s skill as a writer really shines through. She is a master at creating emotional tension and does this in abundance when she examines Stella’s relationships with her mother, her caller and her boyfriend Tom. Stella is not a person who does things by halves, committing herself heart and soul, almost to the point of obsession, a fact captured perfectly on the page. I didn’t especially warm to Stella, but I was completely invested in her story none the less.

So as much as this is, by strict definition, a thriller, it is so much more besides. I sometimes struggle when I hear things described as thrillers as with that title I expect high octane, heart pulsing action. This book does provide moments of tension, where you will perhaps hold your breath, as well as highly emotional scenes where you will be so caught up in what you are reading that all else around you will be completely blacked out, inconsequential.

For me this book was more emotional, suspenseful, taking a mystery, the murder of a young woman, and blending it seamlessly into one of Louise Beech’s signature stories – one of emotional depth, full of beautiful, almost lyrical language, and laden with intrigue. The setting, with the action by and large taking place in the radio studio, adds an almost claustrophobic quality to the story. The pacing was perfect, the tone melancholy. All pieced together it made for yet another superb read from an author who I can only see continue to go from strength to strength.

Nice work Louise. Can’t wait for the next book now.

Today I share my thoughts on the beautiful Unbury Our Dead With Song by Mũkoma Wa Ngũgĩ. Thanks to @cassavarepublicpress for the #gifted copy.
A big thank you to @cassavarepublicpress for today’s #gifted #bookpost - a copy of Addis Ababa Noir. This looks a fabulous collection of short stories by a vast array of Ethiopian authors. Can’t wait to take this journey.
Today Mandie shares her thoughts on Mr Sandman by @susijholliday.
This week I shared my thoughts on The Maidens by @alex.michaelides.
My holiday ‘pets’.
A lovely delivery from @goldsborobooks - my preordered copies of Dead Ground by @m.w.craven and The Girl Who Died by @ragnarjo. Love these books.