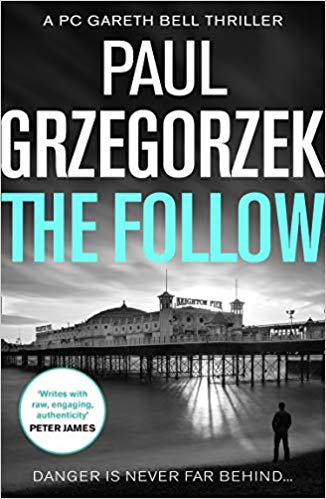 Today I am delighted to share my review of The Follow by Paul Grzegorzek. A big thank you to Finn Cotton at Killer Reads who provided an advance copy of the book for review. As today it the books paperback back birthday I’d also like to add a ‘Happy Publication Day’ to the author. Here’s hoping you have a lot of celebrating planned. Here is what the book is all about:

Danger is never far behind…

A fast-paced and riveting crime novel and the first in a new Brighton-set police procedural series featuring PC Gareth Bell. Perfect for fans of Peter James.

He knows the man is guilty. And he will do anything to prove it…
PC Gareth Bell watches the psychopath who stabbed Bell’s partner stroll out of court a free man. Somebody on the inside tampered with the evidence, and now one of Brighton’s most dangerous criminals is back on the streets again.

Bell’s personal mission for revenge takes him onto the other side of the law and into the dark, violent underworld of the glamourous seaside city. Soon he faces a horrifying choice: risk everything he holds dear, or let the man who tried to kill his partner walk free…

You may have picked up from my reviews that I am quite a fan of the old police based crime thriller. I’m loathe to use the term procedural as I often find that the story takes us far beyond the typical ‘procedure’ used by Police Officer and into worlds that are altogether more personal or adventurous. Procedure implies rules and regulations and uniform (no pun intended) governed by tedious policy and, if I were being honest, that is about as far from what takes place in The Follow by Paul Grzegorzek as you could possibly get.

Now, don’t get me wrong, as a writer with many years experience of the ins and outs of actual Police procedure, that knowledge shines through in the story. There are many times when the tedious nature of police paperwork and even the less glamorous side of undercover work are explored, the narrative confirming what any real police officer (and avid readers who read the right kind of police thrillers) could tell you. That doesn’t make the action any less exciting and it didn’t put me off as a reader. Far from it as the author has also infused the action scenes with both tension and humour as the scene dictates, something which has been done with great aplomb.

Gareth Bell is a brilliant protagonist. Passionate, loyal, but not afraid to bend the rules a little (hell, a lot) in order to ensure that he see’s justice done. It is just as a sure fire conviction against a major league dealer who stands accused of stabbing Bell’s partner and best friend, Jimmy, goes horribly wrong, that we join the action, and that we get to meet our hero, PC Bell. Bell is an officer in the Divisional Intelligence Unit in Brighton, a team that deals with some of the most serious crimes in the area, which in Bell’s case is drugs. Bell is incensed by the miscarriage of justice and about to find himself on the wrong side of the law well and truly as seemingly routine, if not slightly unorthodox, surveillance on his part results in some very major and very unforeseen circumstances.

I don’t want to say more about the story than that as I think you need to read it for yourself. What I will say though is that Bell is a good person, trying to make a bad situation right, but his passion for his colleagues and his job does seem to overshadow his common sense sometimes. Not always, but often enough, and it puts him right in the firing line, both figuratively and literally. Told in the first person narrative, Bell’s easy way of speaking translates well to the story, drawing you in as a reader and keeping you invested in the fortune of both Bell and the rest of the team. I did really like some of the other supporting characters too, particularly Jimmy (even if he was mostly laid up in a hospital bed) and Sergeant Kevin Sands. In fact all of the characters were bang on the money, even the bad guys, who were as loathsome, and occasionally stupid, as can be.

The pacing in the book varies as you may expect, from moments of high peril and adrenaline when a chase is on or a surveillance operation reaches its crucial stages. There are also some quieter moments, bit only just enough to allow readers to catch their breath. Certainly the ending is full of jeopardy and menace as the all the cards are finally laid out on the table. The book fair gallops to its conclusion and rounds off what is perhaps one of the most intriguing openers I have read in a while perfectly. It’s certainly made me keen to hear more from Gareth Bell and his colleagues so I look forward to seeing what comes next.

Delightful bit of #bookpost to come home to after a couple of wet and windy days in Edinburgh - @matthews.carole’s #SunnyDaysAndSeaBreezes courtesy of @millieseaward and @littlebrownbookgroup_uk - looks like the perfect mood lifter and antidote to the inclement weather. Jodie Jackson is all at sea, in every sense. On a ferry bound for the Isle of Wight, she's leaving her London life, her career, and her husband behind. She'd like a chance to turn back the clocks, but she'll settle for some peace and quiet on her brother Bill's beautifully renovated houseboat, Sunny Days. But from the moment Jodie steps aboard her new home, it's clear she'll struggle to keep herself to herself. If it isn't Marilyn, who cleans for Bill and is under strict instructions to look after Jodie, then it's Ned, the noisy sculptor on the next-door houseboat. Ned's wood carving is hard on the ears, but it's made up for by the fact that he's rather easy on the eyes. Bustled out of the boat by Marilyn and encouraged to explore with Ned, Jodie soon delights in her newfound freedom. But out of mind isn't out of sight, and when her old life comes knocking Jodie is forced to face reality. Will she answer the call or choose a life filled with Sunny Days and Sea Breezes? #books #booklover #lovebooks #booklove #bookstagram #bookstagrammer #bookblogger #bookblog #bookblogging #bookbloggers #bookworm #booknerd #booksofinstagram #bookbloggersofinstagram
Pink hot chocolate. Obviously
Today on jenmedsbookreviews.com I share my thoughts on #GraceIsGone by Emily Elgar. Inspired by a true story, this is a gripping and suspense laden read. Meg and her daughter Grace are the most beloved family in Ashford, the lynchpin that holds the town together. So when Meg is found brutally murdered and her daughter missing, the community is rocked by the tragedy. Her daughter, Grace, has been sick for years and all Meg has ever done is look after her. Now Meg is dead, Grace is gone - and fears are growing for her life. Who would kidnap a sick teenager? Who would murder a mother who sacrificed everything? As the community come to terms with what's happened, an unlikely pair start searching for answers: Jon, the most hated journalist in Ashford and Cara, the young woman who found Meg's body. But once they start digging into the past, they will soon realise there's no going back. #booklove #lovebooks #books #bookblog #bookblogger #bookblogging #bookstagram #bookstagrammer #bookstagrammers #booksofinstagram #bookbloggersofinstagram #bookworm #booknerd
Fab evening at @toppingsedin listening to #JamesOswald and #TFMuir talk about their books #BuryThemDeep and #DeadStill. I even treated myself to a new book because, you know, rude not to and all that. 😝 #inspectormclean #dcigilchrist #books #booklaunch #bookstagram #bookstagrammer #bookblog #bookblogger #bookblogging #bookbloggers #booknerd #bookworm #notastalker #havethatinwriting
Guess whose review has been quoted in the cover of #DeathDeserved? That’s right - @jacob.collins.18 of #HookedFromPageOne. Oh - and me. Whoop whoop. #covergirl #notlikely #booklove
A massive thank you to @Bookouture for my #notbookpost - it’s only a #SilentScream mug!!! And I really do love #KimStone. Head over to Bookouture’s Facebook page where they’ll be celebrating Kim and @angiemarsons fifth anniversary with a live feed tonight at 7pm! #booklove #lovebooks #lovemugs #booksandcoffee #bookiversary