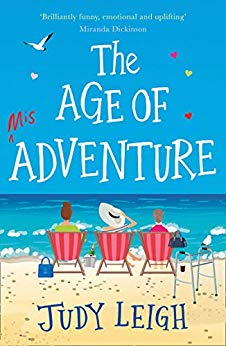 Today it’s my pleasure to join the blog tour for The Age of Misadventure by Judy Leigh. I have a fab extract to share with you courtesy of Sabah Khan at avon Books UK. Here is what the book is all about:

The gloriously funny new novel from the author of A Grand Old Time.

All Georgie Turner wants is to keep her family together. But with her daughter growing up fast, her sister married to a man Georgie hates, and their aging aunt getting more and more outrageous, nothing’s simple.

So when her brother-in-law makes his biggest mistake yet, Georgie sees the chance to reunite the ladies in her life. And after a little persuasion, three generations of Turner women head off on a very unusual road trip. Georgie’s confident that some sun, sea and a bottle or two of prosecco will make this an adventure they’ll never forget.

What could possibly go wrong?

‘Did you remember to order next week’s groceries on the line? Did you bring the extra Guinness? I’m getting a bit low.’

I start to empty the bag: beer, biscuits, cake, fruit, chocolate. She grabs my hand. Hers is thin-skinned – purple veins and brown blotches.

‘A Guinness’d be better, love.’

‘So the doctor says. But it keeps me company. Besides, Guinness is good for you. They say so on the telly.’

I bustle about and notice the photos on her mantelpiece either side of the loud clock need dusting. Taking a tissue from the box beside her chair, I pick each one up carefully and wipe the glass. There’s a black-and-white photo, all smiles: Nanny and her husband, Wilf Basham, who was my mum’s elder brother. She’s my aunt but everyone calls her nan, never Aunty Anne or even Aunty Nan any more. A few years older than my mum would’ve been, she’s eighty-eight, but made of stronger stuff than either her husband, who died five years ago, or my poor mother, who never made it close to sixty. There are two photos of her wedding in a time when fashions were puffy dresses with petticoats under ballooning skirts. Uncle Wilf has the slicked-back hair of a Teddy boy and a long jacket, his face as serious as an undertaker’s.

I pick up another photo of Nan with my mum, Josie, my dad, Kenny and Wilf. Mum’s dark-haired, like Bonnie, although Mum’s is cut short and backcombed, 1960s style; Dad is fair like me, same straight nose and a too-wide grin. They’re laughing, enjoying the caravan holiday Nan is always reminiscing about in North Wales, smiles stuck to their faces as if it were their happiest moment.

I turn back to Nanny Basham. She has froth on her upper lip and is grinning at her Guinness, her eyes shining like a naughty child’s behind thick-lensed glasses.

‘Your shopping will be here tomorrow first thing, Nan. The supermarket man will bring it in for you but you’ll have to put the frozen stuff in the big freezer immediately. And sort out the fridge stuff. I’ll put everything else away on Tuesday. And I brought you a Sunday dinner, the ones in the box with the Yorkshires. You like those, don’t you? Shall I put it in the oven now?’

She nods and slurps again. ‘Put the telly on, Georgina, will you, love? There’s a football game on in a bit. My Wilf always loved to watch the Reds on a Sunday afternoon. I like to see all those lads running about in their little shorts with their skinny legs.’‘

A Nanna on Guiness? Sounds like my kind of gal. If you’d like to read more you can purchase a copy of the book from the links above.

Judy Leigh completed an MA in Professional Writing at Falmouth University in 2015, leaving her career of 20 years as an Advanced Skills teacher of Theatre Studies. She has had several stories published in magazines, including The Feminist Wire, The Purple Breakfast Review and You is for University. She has also trained as a Reiki healer, written a vegan recipe blog and set up a series of Shakespeare Festivals to enable young people to perform the Bard’s work on stage.