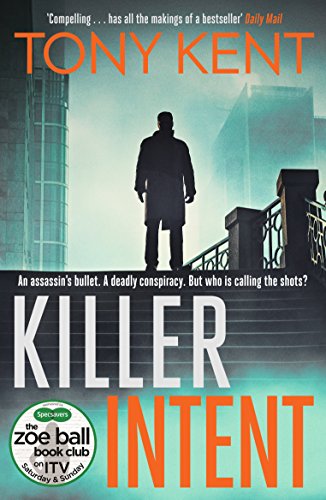 Today it is my great pleasure to share my thoughts on Killer Intent by Tony Kent. For the sake of full disclosure, I won a copy of this book (signed) and very pretty it is too, but – as anyone who knows me will tell you, I don’t read my signed books – I reviewed a copy I bought on my Kindle instead.

I’ve had this book on my radar for a while having seen the author on a panel at Bloody Scotland last year, but for some reason I have only just gotten around to reading it. Oh what a fool I am. Before I tell you why, here is what the book is all about.

As seen on ITV in the Zoe Ball Book Club

An assassin’s bullet. A deadly conspiracy. But who is calling the shots?

‘A twisty, action-packed conspiracy thriller. Kent knows how to bring the thrills’ — MASON CROSS, author of the Carter Blake series

When an attempted assassination sparks a chain reaction of explosive events across London, Britain’s elite security forces seem powerless to stop the chaos threatening to overwhelm the government.

As the dark and deadly conspiracy unfolds, three strangers find their fates entwined: Joe Dempsey, a deadly military intelligence officer; Sarah Truman, a CNN reporter determined to get her headline; and Michael Devlin, a Belfast-born criminal barrister with a secret past.

As the circle of those they can trust grows ever smaller, Dempsey, Devlin and Truman are forced to work in the shadows, caught in a life-or-death race against the clock, before the terrible plot can consume them all.

Do you know what I hate? I mean realllllllly hate? It’s writing reviews for bloody good books as it’s so hard. You want to do the book justice but you know it’s going to be hell on earth trying to find the right words. I love a good thriller and Killer Intent is a very, very good thriller. Most excellent in fact, and I’m quite frankly a little annoyed with myself that I haven’t read it sooner.

This is a book that ticks all of my boxes when it comes to what I am looking for in a thriller:
Intense storyline? Yep. In spades. This is a story that seamlessly blends political ambition, intrigue and high octane action sequences that had me as a reader on the edge of my seat, pulse racing as I wonder how in the hell our heroes will find their way out of the latest scrape they find themselves in.
Deep rooted secrets, double crossing and corruption? Absolutely. In the most imaginative and cleverly portrayed way possible.
Bad guys you love to hate (or perhaps hate to love) …? Totally. Joshua and Stanton … Gah. Bloody Stanton. Absolutely abhorrent and so perfectly written I could so completely picture him, the kind of loathsome creature you’d happily see get their comeuppance. As for Joshua … Well, I’ll be honest – my feelings there are a little more complicated as I do love a good bad guy. And Joshua is, undoubtedly, a ‘bad’ guy. His motivations are mostly clear, totally expected, diabolical and inexcusable but there lies within his traitorous exterior, the heart of a man who would do anything for those he loves.

And then there are our heroes. The people you need to absolutely believe in in order to want to follow them through an entire novel and see them succeed. They don’t necessarily have to be likeable, but you have to believe in their quest as it were. Thankfully, in this case, our central team of Joe Dempsey, Michael Devlin and Sarah Truman are absolutely cracking, both likeable and believable and I was more than happy to spend time in their company.

Dempsey is a former SAS operative, the perfect action hero. Kind of aloof, focused and determined he has a brilliant kind of instinct and a score to settle with Joshua, not only because he has killed one of Dempsey’s colleagues. I really liked his character, his sense of discipline and, let’s be honest, the complete action man vibe he had going on.

Contrast that with Michael Devlin, London Barrister who comes armed with a very sharp mind, and you would expect to be exposed to a very different kind of story when in his company. But there is far more to Devlin than meets the eye. You get to see a vulnerable side to his character at times which makes him appear perhaps a little more human than Dempsey – he’s a dog lover, how can you not love that – but there is undeniable strength there too. He’s kind of the Axel Foley of English Law. He wasn’t always a Barrister and he may have fractured a law or two when he was a kid in Ireland. Hell … scrap that. He and his brother blew the laws apart.

I think I kind of fell in love with both characters a little while reading this book (although Dempsey probably edges it because as much as I love an Irish accent, I love an action man more) but they aren’t the whole story. Caught in the crossfire between Dempsey, Devlin and Joshua is reporter Sarah Truman. Whilst a little inexperienced in the field and finding herself having to learn very, very quickly when she ends up a target herself, she is a very resilient and engaging character. Smart, a little sassy and far more than just a pretty face and the trophy wife her father would have her become, everything about the way in which her character was developed felt authentic and true to both the story and her nature.

Much of the story is grounded in the violent political and religious history of Northern Ireland, a sad truth which still resonates now even in times of peace. It is based around the premise of the fragility of a truce agreed between two very strong but very opposing forces. Political exploitation, loyalty and greed are all all present in abundance but just who, how, why and what you will have to read to find out.

Full of taut, and sometimes explosive, action, brilliant narrative and moments of absolute jeopardy that are so intense they can take your breath away, I loved this book. (I know I hide it well). If you are a fan of political thrillers with a lovely accompaniment of drama and tension then go grab yourself a copy. You won’t be disappointed. Am I surprised this was a Zoe Ball Bookclub choice? Not one bit. It’s bloody marvellous.