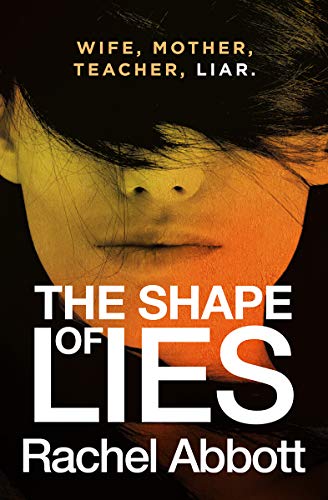 Today it is my great pleasure to share my thoughts on Rachel Abbott’s latest Tom Douglas thriller, The Shape of Lies, which is released tomorrow (12th Feb). I am a huge fan of the series and was delighted to receive an advance review copy of the book via Netgalley. I might have a little extra reason to have been intrigued to read this one thought. Before I say why, here is what it’s all about:

Yesterday, Scott was dead. Today, he’s back.
And Anna doesn’t believe in ghosts.

Scott was Anna’s boyfriend. She loved him, but he ruined her life. When he died, she should have been free, but today Scott is on the radio, threatening to spill her secrets.

Anna is a mother, a wife, and head teacher of a primary school.
And she’s a good liar.

She made one mistake, and now she is having to pay for it. Scott is the only person who knows the truth about her past, but how can he be alive?

Soon, DCI Tom Douglas is going to knock on her door looking for answers. But Anna is already running scared: from the man she loved; the man she watched die; the man who has come back to life.

She has one week to find him. One week to stop him.

Available From: Amazon UK | Amazon US

Okay. So before I begin I should say that for the last book in the series, Come A Little Closer, I took part in a writing challenge as part of the blog tour and I won. The prize was to be a named character in this latest Tom Douglas book. Yes. I know. I’ve been around a bit under all possible derivatives of my name, but it doesn’t get any less weird seeing it in print. And it didn’t affect the reading or influence my thoughts on the book at all as Jennie was a very minor character so aside from the odd ‘gah’ moment when she cropped up again I was able to ignore the name check.

This is a book that will set you thinking right from the start. Anna is a seemingly normal woman – wife, teacher and, more importantly, mother, she has the perfect life. Or so it seems. Until one day she hears a voice from her past on the radio, a voice that shouldn’t be there at all. What follows is a tense, psychological thriller in which people from Anna’s past are found murdered and she starts to realise that the sins of her past cannot stay secret for much longer.

The story itself is told by and large from Anna’s point of view, with certain chapters focused on the investigation being led by DCI Tom Douglas and DI Becky Robinson. In that respect it follows a very familiar format and although we may think of this as a Tom Douglas book, that is simply because he is the dominant recurring character throughout the series. This story really is Anna’s. Don’t get me wrong. You will get more than enough Tom to keep you satisfied, and his personal life is every bit as complex and troublesome as the murders he is investigating. I loved the way in which those moments of private challenges reflected in his work life, the previously unflappable DCI, clearly affected by his private life and captured perfectly by the author.

Rachel Abbot has a real knack for creating character. When you think that in pretty much every book she has to bring us into a whole new world and establish a rapport between the reader and the lead protagonist in a few short pages, it is quite an achievement that she hits the mark time and time again. Now don’t get me wrong – you won’t always like or perhaps even trust the main characters but you will be invested in their future from the off. Most police series rely on the investigative team to pull a story together with readers having a passing interest in the characters on the periphery, sometimes with an emotional connection, sometimes not. In this book we absolutely have to care about Anna. And you know what? I did.

In Anna, Rachel abbott has created a truly fascinating character. On the surface she seems quite straight-laced, quite normal, her life centred and full of structure. The more we read though, the more we learn that things aren’t as simple as they seem. There is far more to Anna than meets the eye and I found myself wanting to know more about her and her relationship with the mysterious Scott. There are chapters which are told from the perspective of a younger version of Anna, each on feeding into the story and giving us more insight into the young adult she was rather than the mother and teacher she has become. You can see the mistakes she has made and is a bout to make. I found myself wanting to talk to Anna and tell her not to be so gullible, but this is fiction and you have to just sit and watch on the sidelines as the inevitable happens. But let’s face it, if she hadn’t made mistakes her story wouldn’t be half so interesting now.

This is a story which slowly unwinds, in which layer upon layer of deceit is gradually uncovered until the final, dramatic, and quite frankly, shudder inducing ending. Anna is faced with one of her greatest phobias and to find out what it is, you need to read because I’m not giving the game away. There is so much duplicity at play that you won’t know who to trust. Even Tom’s personal life is fractured by lies. No-one gets an easy ride. Unless they’re in a car with Becky. It seems motherhood has calmed her down somewhat.

Full of great characters, thrills, tension and surprises, this is another brilliant read from Rachel Abbott that is highly recommended for fans and new readers alike.

Rachel Abbott’s debut thriller, Only the Innocent, was an international bestseller, reaching the number one position in the Amazon charts both in the UK and US. This was followed by the number one bestselling novels The Back Road, Sleep Tight, Stranger Child, Nowhere Child (a short novel based on the characters from Stranger Child), Kill Me Again and The Sixth Window. Her most recent novel, Come a Little Closer, is available from February 2018.

Rachel’s novels have now been translated into over 20 languages and her books have sold over 3 million copies in the English language.

Rachel splits her time between Alderney – a beautiful island off the coast of France – and the Le Marche region of Italy, where she is able to devote all her time to writing fiction.