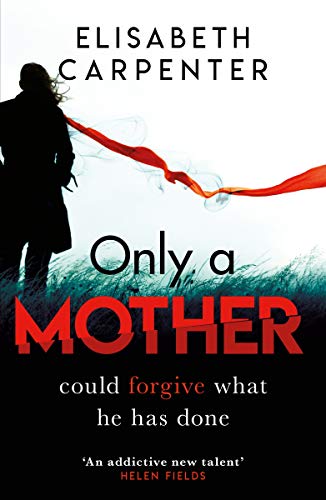 Today it is my great pleasure to be one of the blogs opening up the tour for Only A Mother by Elisabeth Carpenter. My thanks go to Tracy Fenton for inviting me to join the tour, and to publishers Orion for providing an advance copy for review. Here is what the book is all about:

ONLY A MOTHER . . .
Erica Wright hasn’t needed to scrub ‘MURDERER’ off her house in over a year. Life is almost quiet again. Then her son, Craig, is released from prison, and she knows the quiet is going to be broken.

COULD BELIEVE HIM
Erica has always believed Craig was innocent – despite the lies she told for him years ago – but when he arrives home, she notices the changes in him. She doesn’t recognise her son anymore.

COULD LIE FOR HIM
So, when another girl goes missing, she starts to question everything. But how can a mother turn her back on her son? And, if she won’t, then how far will she go to protect him?

COULD BURY THE TRUTH
Perfect for fans of Lisa Jewell, Louise Jensen, Katerina Diamond, Helen Fields and CL Taylor – a hard-hitting psychological thriller told from the fresh perspective of a killer’s mother.

I really enjoyed the first two books by Elisabeth Carpenter, 99 Red Balloons and 11 Missed Calls, and so when the opportunity arose to read this latest offering, I jumped at it. Would the book meet my expectations? Well … it’s a very different kind of read, a different tone and perhaps even pacing, but yes. Yes, it absolutely did.

This is, in essence, the story of Erica, a woman who has had to come to terms with the fact that her son is a convicted murderer, a child who, somewhere along the way, went off the rails and murdered his girlfriend. At least she has accepted that he has been convicted – she has never, ever, believed him to be guilty. But is he?

We meet Erica and Craig on the verge of his release from prison. Erica has spent years hiding from people, suffering all manner of abuse and suspicion, deemed almost as guilty as her son for what has happened. She is an intelligent and resolute, but also kind of meek woman, and Elisabeth Carpenter has done a brilliant job of presenting a woman who has been beaten down but has not yet given up. She is convinced of Craig’s innocence, but shocked by the way in which prison has changed him.

Told partly from Erica’s point of view, her story centres around her relationships – both with friends and neighbours, and with her son – just before and after he is released from prison and how she, and Craig struggle to adjust to the changes in front of them. We are also treated to the point of view of journalist, Luke, who covered the original case and is now trying to get more of a story out of Erica and Craig, particularly the belief that everyone has that Craig was responsible for another murder locally.

I love the way in which the author has slowly built the anticipation in this novel, gradually adding subtle layers of doubt and mystery into what should be an open and shut case. We are treated to the point of view of one other character, but as to who that is we cannot be certain. There are clues and hints dropped, perhaps the odd moment of misdirection, but it is all cleverly fed into Erica, Craig and Luke’s stories, keeping the reader intrigued without jarring them out of the main action.

This is billed as suspense, and I can see that. However, where the previous two books perhaps fit more clearly into the genre, this book takes a much steadier approach, with a good proportion of Erica’s story actually being a keenly observed study of how prison can affect both the guilty and their family and friends, and how the victims of a killer can extend well beyond the deceased. I was as intrigued by this portrayal of humankind every bit as much as I was the need to find out whether or not Craig was as guilty as his confession would suggest. The segments featuring Luke and, more especially, the mystery narrator perhaps fit the style more definitely, but all three narrative elements add to the story in their own way.

I love the way in which the author has developed the characters in this book, all of them believable, and often found myself feeling sympathy for Erica especially. I liked Luke too, the way he juggled the need to write his story, his personal beliefs, and his marriage which seemed to be struggling. It isn’t a fast paced book so if you are looking for a cut and thrust thriller, this probably isn’t for you. It is far more subtle than that, and all the richer for it. Don’t get me wrong, the sense of jeopardy builds towards the end of the book and there is a powerful resolution which sees all remaining questions answered amid a very tense showdown involving all of the main characters.

If you are looking for a character driven story with a subtly built tension then this could be the read for you. I’d definitely recommend it.

If you would like a copy of the book for yourself, it is available now from the following retailers:

Elisabeth Carpenter lives in Preston with her family. She completed a BA in English Literature and Language with the Open University in 2008.

Elisabeth was awarded a Northern Writers’ New Fiction award, and was longlisted for Yeovil Literary Prize (2015 and 2016) and the MsLexia Women’s Novel award (2015). She loves living in the north of England and sets most of her stories in the area.