This piggy has literally no significance to this post whatsoever, but I was playing on my WordPress app the other day and found I could download Gifs. So I did. And who doesn’t love an over excited piggy anyway?

How have we all been? I’m a little tired this week but it’s all my fault so I’m not looking for sympathy. On Tuesday I took the afternoon off work so that I could attend the super-launch with the lovely Orenda Books in London. After starting work at 07:30, Mandie and I hot footed it to Wolverhampton (well drove), got on the train at quarter-to three, headed off to the city, took a few random Christmassy shots, drank some coffee, and then headed on over to Angel for the fun to begin.

Doesn’t London look festive? Or something … We were in town to celebrate the launch of not one, not even two, but five absolutely cracking Orenda titles: The Lingering, by SJI Holliday; After He Died by Michael J Malone; The Lion Tamer Who Lost by Louise Beech; Good Samaritans by Will Carver and Attend by West Camel. It was a lovely evening and so great to see so many familiar faces again. I picked up a few signed books (as you do) and was lucky enough to be given an early review copy of Call Me Star Girl, next years big thriller title from Louise Beech. So excited. Massive thanks to all at Orenda for organising such a fab night. It’s rounded off a brilliant year of books and made me even more keen to see all you have in store for us next year.

For those who are wondering, yes – I was back in work for 07:30 the next day. Felt like death but then that’s nothing new 😉

Here. Have a random cat photo or two to make you smile.

Oh. And I bought a Groot. I am very pleased with myself about that one. I lead a sheltered life …

Books wise, aside from the ones above, I banged in a few pre-orders. Seemed rude not to. First up was All The Wrong People by Michael Grothaus. I loved Epiphany Jones so I can’t wait to see what he has in store for us this time. I also ordered The Absolution by Yrsa Sigurdardottir and All That’s Dead by Stuart MacBride. So excited about them all.

I received some e-book post which was absolutely lovely and the eagle eyed among you have probably already seen it – Longstone by LJ Ross. Publication day today, and if you’re a fan of DCI Ryan, I can highly recommend it. If you’ve never read any I can still recommend it, it just means more to fans on an emotional level, obviously. Two very exciting Netgalley titles picked up too. Cold as the Grave by James Oswald and The Passengers by John Marrs. Tidy. 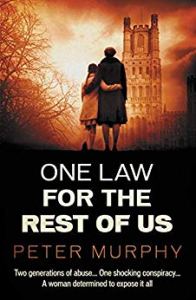 One Law For The Rest Of Us – Peter Murphy

When Audrey Marshall sends her daughter Emily to the religious boarding school where she herself was educated a generation before, memories return – memories of a culture of child sexual abuse presided over by a highly-regarded priest. Audrey turns to barrister Ben Schroeder in search of justice for Emily and herself. But there are powerful men involved, men determined to protect themselves at all costs.

This is the second book I have read in the Ben Schroeder series and I have to say I really am loving it. This is a harrowing, if timely story and one which will resonate with a lot of people. It examines the idea of privilege and power and how corruption and ‘the national interest’ can take precedence even in the most harrowing of cases. It does involve the topic of child abuse so one to be wary of, but it is handled in a very mature and sympathetic way and whilst not always an easy read, the sense on injustice will spur you to read on, ever hopeful of a decent conclusion. You can order a copy of the book here. My review will be published later this week. 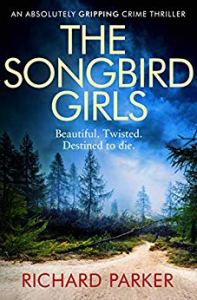 Her eyes were closed. From a distance the blood around her neck might have looked like a necklace, but up close her body told a different tale. She had been murdered. A tiny songbird lay beside her, its neck broken…

Detective Tom Fabian‘s past is catching up with him. It has been years since the most high-profile case of his career – when his evidence put infamous serial killer Christopher Wisher behind bars forever. But when Wisher summons a reluctant Fabian to his prison cell to hand over a diary, he realises that Wisher’s twisted games are far from over.

Shortly after Fabian’s visit, Wisher is found dead in his cell. And a few days later, the police find a woman’s body bearing Wisher’s signature, a dead songbird. But the police never released this detail to the public… so who has Wisher been talking to?

Fabian is desperate to find the killer before another innocent life is taken. But as more bodies turn up, Fabian begins to realise that Wisher may have handed him the clues before he died. Is the twisted serial killer still pulling the strings from beyond the grave…?

If you can’t get enough of crime thrillers by Adam Croft or Melinda Leigh, you will love The Songbird Girls.

Well, I thoroughly enjoyed the first book in Richard Parker’s Detective Fabian series, but I have to say I absolutely loved this one. A twisted game of cat and mouse like you wouldn’t believe, only in this game, the cat is dead. I loved the tension and the sense of inevitability which ran through this story, and the knowledge that we as readers have of what is about to happen. It’s not gratuitous in anyway but it will leave you wanting more and I flew through it in no time. You can preorder a copy here and my review will be published next week as part of the tour. 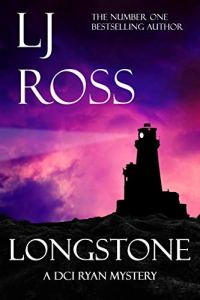 Between the devil and the deep blue sea…

Viking treasure is discovered beneath the icy waters of the North Sea and local historian Doctor Anna Taylor is called in to help catalogue the most exciting hoard in living memory. But when a shipwreck diver washes up dead, she’s soon out of her depth. Luckily, she knows just the person to call…

When DCI Ryan arrives at the picturesque fishing town of Seahouses, he’s faced with an impenetrable wall of secrets and lies. As he juggles marine archaeology and the cutthroat world of shipwreck diving, another murder blows the case wide open. To uncover the truth, Ryan must delve deeper into the hearts of those around him to find what lies beneath…

Oh I do love this series and it just keeps getting better. This book is full of mystery and the same trade mark humour and gorgeous setting that we have all come to know and love. Faced with a perplexing case that may well be a simple accident, Ryan and co find themselves in the beautiful town of Seahouses, forced to dive deep to find the secrets that the residents have kept long hidden. You can read my review here and the book is available to order here.

Not too bad this week. Three books. I’ll take that. I’ve hoping to do the same again this week and then that’s my 2018 reads done and dusted and we’ll be just days from Christmas. Yay. (Or boo – either or). Busy week on the blog, boosted by Bookvent posts and lost of tours.

Her Final Confession by Lisa Regan

The Silk Road by Mark Leggatt

Another pretty full on week ahead with #bookvent all week and a good few tours to keep us amused. Today sees me share my thoughts on Jane Isaac’s latest Beth Chamberlain thriller, Presumed Guilty. Then we have tours for Moonlight on the Thames by Lauren Westwood; Staying On by CM Taylor; One Law For The Rest of Us by Peter Murphy; Seven Days of Us by Francesca Hornak; Christmas Miracles at the Little Log Cabin by Helen J Rolfe; and The Taken Girls by GD Sanders.

I have nothing exciting coming up this week, just work and reading and the occasional blogging catch up so next week’s post might be rather dull. This week’s post probably has been too but at least you got a piggy …

Have a fabulously bookish week and I’ll see you next Monday for our final countdown towards Christmas. 15 days to go. Can you believe it?