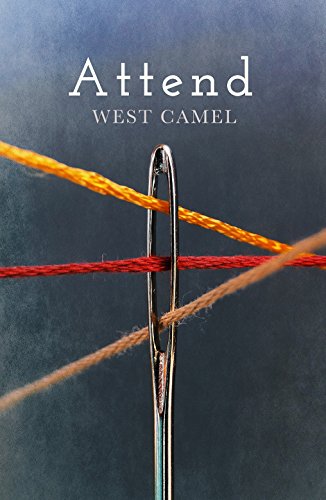 Today it is my absolute pleasure to be taking part in the blog tour for Attend, the debut novel from West Camel. A massive thank you to Anne Cater of Random Things Tours for inviting me to join the tour and to publishers Orenda Books for providing the advance copy for review. Here is what the book is all about:

‘If Armistead Maupin were to write about a diverse group of friends in Deptford, the results might resemble this … You’ll miss these characters when they’re gone’ Paul Burston

Under their feet lies magic…

When Sam falls in love with South London thug Derek, and Anne’s best friend Kathleen takes her own life, they discover they are linked not just by a world of drugs and revenge; they also share the friendship of the uncanny and enigmatic Deborah.

Seamstress, sailor, story-teller and self-proclaimed centenarian immortal, Deborah slowly reveals to Anne and Sam her improbable, fantastical life, the mysterious world that lies beneath their feet and, ultimately, the solution to their crises.

With echoes of Armistead Maupin and a hint of magic realism, Attend is a beautifully written, darkly funny, mesmerisingly emotive and deliciously told debut novel, rich in finely wrought characters that you will never forget.

I have been putting off writing this review. And I mean putting it off, putting it off. I just really don’t know how to begin. This is one of those books that is so very hard to describe, hard to position in terms of narrative style or even genre. It’s described as magical realism and I guess, finally, I may now be starting to understand what that means. For me, however you want to try and classify the book, it put me in mind of the beautifully lyrical titles that Orenda excels at finding, the likes of Sealskin and The Bird Tribunal. Perhaps neither one of those fits perfectly as a comparison, but in terms of the narrative style, the sense of realism that dominates the story and yet the sense that there is more to what is happening than meets the eye, they are as close as you will find.

Attend is, in essence, a story of three very different people whose lives intersect and become intertwined in the most unexpected of ways. Anne is a recovering drug addict who is trying hard to get her life back on track whilst struggling to navigate the murky waters of family and friendships. Sam is a young man who is looking for love, finding it in the most unlikely of places. Deborah is a woman who has lived a very long life, has lived through wars and experienced things that defy explanation. She navigates the murky waters of Deptford. Quite literally as it happens. When Deborah enters the lives of both Anne and Sam, it is hard to see how a friendship can possibly develop, and yet that is exactly what happens. Both of them find a kind of inexplicable solace and comfort in the old woman’s presence.

It is really hard to explain the book without giving too much away. What I can say is that Deborah meets both Anne and Sam quite by accident and they bond over a series of stories she tells them about her life. These are quite extraordinary tales and it is here that the whole sense of something mythical, a kind of wonderfully enduring folk tale, begins to pervade the story. These passages, largely set in the past, during wartime and beyond, are quite exquisite to read, a wonderful blend of local history and a lyrical prose which paints the scene in glorious colour. Or should that be embroiders … Although Deborah is telling her own story, you are never entirely sure how much of it to believe and how much is the fanciful ramblings of a dear old lady, finally glad to have an audience after many years of living in the shadows.

When it comes to the lives of Anne and Sam, the story is far more grounded in modern life. The gritty reality of Anne’s life is a stark contrast to the colour which Deborah brings to her story. Anne’s is a story which is easy to understand if not wholly relate to, and West Camel has done a brilliant job of creating a character who feels undeniably real. You won’t fully empathise with her – she was a drug addict after all – but you do understand her problems and the  way in which the author has portrayed her struggles, not only with staying clean but with her understanding the course of her emotions, is well observed and a side of her character I can fully understand. Sam’s life, likewise, is one that many people will relate to. The struggle to find love; the confusion that comes as you walk the fine line between expectation and reality. Both characters seem a bad fit with Deborah, and yet this strange old woman with her fantastical stories helps them to discover something within themselves that could change their future.

Deborah is a truly interesting character. As a child she learns to recreate a special motif, one which seems unusual and rare but the small scrap of cloth on which it is embroidered seems to hold within in it a lifetime of secrets. And this is where the element of magic comes in to the story, where the novel becomes something special that elevates it far beyond simply being a story of modern life in the city. The motif which Deborah sews is enduring, as is her quest to finish stitching the pattern once and for all.

It is as though the threads that Deborah uses are the threads of life, and each pattern she weaves is just another fragment of her story being told. Likewise, each of the characters, Deborah, Sam and Anne, represent a unique thread, quite unlike any other around them. It takes Deborah’s skill as a seamstress to pull these single, diverse threads together, just as the author draws their stories together throughout. We slowly see the pattern emerging, a kind of rich tapestry of exploding colours. The image we are presented with is all at once poignant and beautiful, full of both fear and wonder. There is an overwhelming sense of the inevitable as we read, that all three of our protagonists will find their new beginning, whatever that may be.

This book really is something special and I know I have made a complete mess of explaining why it is such a stunning read. But I can make my feelings a little clearer by giving it one of these … I think it’s earned it.

If you would like a copy of Attend for yourself then you can find it at the following retailers:

Born and bred in south London – and not the Somerset village with which he shares a name – West Camel worked as an editor in higher education and business before turning his attention to the arts and publishing. He has worked as a book and arts journalist, and was editor at Dalkey Archive Press, where he edited the Best European Fiction 2015 anthology, before moving to new press Orenda Books just after its launch. He currently combines his
work as editor at Orenda Books with writing and editing a wide range of material for various arts organisations, including ghost- writing a New-Adult novel and editing The Riveter magazine for the European Literature Network. He has also written several short scripts, which have been produced in London’s fringe theatres, and was long listed for the Old Vic’s 12 playwrights project. Attend is his first novel.

Today on jenmedsbookreviews.com I’m resharing my thoughts on #DeepDirtyTruth by @crimethrillergirl in readiness for the release of the fourth #lorianderson novel, #DeepDarkNight next month. I love Lori and this book sees her in deep jeopardy, on the hook with the Miami mob as she fights to save her own life. Full of action and tension, fans of the kick ass heroine will love it. A price on her head. A secret worth dying for. 48 hours to expose the truth… Single-mother bounty-hunter Lori Anderson finally has her family back together, but her new-found happiness is shattered when she’s snatched by the Miami Mob – and they want her dead. Rather than a bullet, they offer her a job: find the Mob’s ‘numbers man’ who’s in protective custody after being forced to turn federal witness against them. If Lori succeeds, they’ll wipe the slate clean and the price on her head – and those of her family – will be removed. If she fails, they die. With North due in court in 48 hours, Lori sets off across Florida, racing against the clock to find him and save her family. Only in this race the prize is more deadly – and the secret she shares with JT more dangerous – than she ever could have imagined. In this race only the winner gets out alive… #booklove #lovebooks #books #bookstagram #bookstagrammer #booksblogger #bookblog #bookblogging #bookbloggers #booknerd #bookworm #booksofinstagram #booksofinsta #bookbloggersofinstagram #booklover @orendabooks #yearoforenda
Head over to jenmedsbookreviews.com and you’ll find my thoughts on #BetonRouge, the brilliant second Chastity Riley book by #SimoneBuchholz. This one has a slightly different styling to Blue Night, but still has the same sassy hard drinking prosecutor we all love, this time in the road with her new Investigative partner Ivo. I love Ivo. On a warm September morning, an unconscious man is found in a cage at the entrance to the offices of one of Germany’s biggest magazines. He’s soon identified as a manager of the company, and he’s been tortured. Three days later, another manager appears in a similar way. Chastity Riley and her new colleague Ivo Stepanovic are tasked with uncovering the truth behind the attacks, an investigation that goes far beyond the revenge they first suspect … to the dubious past shared by both victims. Travelling to the south of Germany, they step into the hothouse world of boarding schools, where secrets are currency, and monsters are bred … monsters who will stop at nothing to protect themselves. A smart, dark, probing thriller, full of all the hard-boiled poetry and acerbic wit of the very best noir, Beton Rouge is both a classic whodunit and a scintillating expose of society, by one of the most exciting names in crime fiction. #booklove @orendabooks #lovebooks #books #bookstagram #bookstagrammer #bookblogger #bookblog #bookblogging #bookbloggers #booknerd #bookworm #booksofinstagram #booksofinsta #bookbloggersofinstagram #yearoforenda
Had to drive through #wentshirewitch #changeling territory tonight to get home from the #orendaroadshow . No sighting this time around ...
My really lovely looking #OrendaShelfie now that I have @k_o_dahl’s #Sister along with the rest of the family. On the way for a spot of retail therapy and dinner now before @mandie163.mg and I hit the #OrendaRoadshow in The Wirral. #hariboanyone? #books #booklove @orendabooks #bookish #bookstagram #bookstagrammer #bookblog #bookblogger #bookblogging #bookbloggers #booksofinstagram #booksofinsta
Will you #SurviveTheHeatwave 😱 The brand new standalone from Katerina Diamond is coming June 25th 2020. @AvonBooksUK
Nice short walk along the riverside to get to the station this morning. Next stop Manchester then Stafford then home. For now...