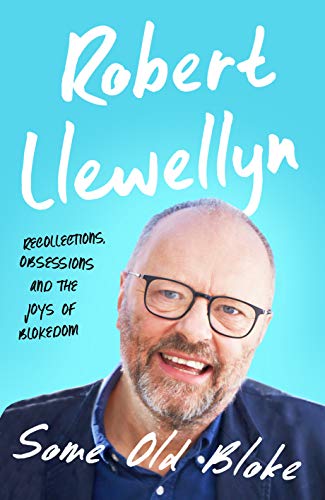 Today it is my great pleasure to be joining the blog tour for Some Old Bloke by Robert Llewellyn. My thanks to Anne Cater of Random things tours for inviting me to join and to publishers, Unbound, for providing a copy for review. Here is what it is all about.

When writer, comedian and Red Dwarf actor Robert Llewellyn’s son scrawled a picture of him at Christmas and titled it ‘Some Old Bloke’, Robert was cast deep into thought about life and what it means to be a bloke – and an old one at that. In this lighthearted, revealing and occasionally philosophical autobiography, we take a meandering route through Robert’s life and career: from the sensitive young boy at odds with his ex-military father, through his stint as a hippy and his years of arrested development in the world of fringe comedy, all the way up to the full-body medicals and hard-earned insights of middle age. Whether he is waxing lyrical about fresh laundry, making an impassioned case for the importance of alternative energy or recounting a detailed history of the dogs in his life, Robert presents a refreshingly open and un-cynical look at the world at large and, of course, the joys of being a bloke.

Now like many other people, I have fond memories of watching Red Dwarf, in which Robert Llewellyn played the unforgettable Kryton, so I was very intrigued when offered the chance to read this book and I have to say I’m glad I did. It may have escaped people’s notice but I am not now, have never been, nor am I ever likely to be, a bloke – old or otherwise – and so I entered the book open minded, wondering what pearls of wisdom the author would impart from his life, ready to see if any of it, despite the lack of blokedome on my part, would resonate.

From reading there are clearly a number of other books in which I can find out more about Robert Llewellyn’s life, including the Red Dwarf years, and I am looking forward to reading those. This book, however, doesn’t really touch on those so much, but is more about the awkward transition from childhood to adulthood and all those traumatic moments which shaped the person he has become today. It is really hard to describe the book too much as it is one man’s story and a journey he needs to take the reader on rather than me trying to explain it to you.

There are many moments of wit which shine through in this book. I have to be honest, although one some occasions Robert Llewellyn describes a bitter sweet relationship with some of his canine pals, some of the scenes featuring his dogs had me creasing with laughter as they were captured so matter of factly and yet we so absolutely spot on as observations. From Lurcher cabbage, who was a dog clearly loved, to the more colourful and memorable dog, Ruffage, there were so many moments to make you laugh, as well as some to make you sad too.

The book takes you through the authors Hippy years in which travels in a camper van were the height of luxury, and clearly framed his life and moral code and environmental convictions in later life, through to the beginnings of his comedy career and time spent at the Edinburgh Fringe where he would later meet his wife. Form there to the fun but challenging Scrap Heap years, we are treated to highlights of his childhood and working life. The highs, and lows, are all captured and very eloquently put, in a writing style which kept me engaged, the tone more conversational and light, even when, towards the end, it takes a far more serious tone, the talk turning far more towards the environmental and socio-political side of the author’s beliefs. It’s not all doom towards the end though with readers being treated to an excerpt from an unpublished tome, a futuristic/dystopian read which is scarily close to where modern life seems to be heading.

All in all and enjoyable and engaging read which has left me wanting to hunt down those other books and find out more about this very fascinating man.

If you would like a copy of the book for yourself, it is available now from the following links:

Robert Llewellyn is an actor, novelist, screenwriter, comedian and TV presenter, best known for Red Dwarf, Scrapheap Challenge, Carpool and Fully Charged. He drives an electric car and writes under a rack of solar panels in Gloucestershire

Busy reading week this week. I am a very lucky blogger to have access to such fine titles.
Definitely looking forward to this one by @sharonjbolton - #ThePact - out May 27th. Available to preorder now.
Today I’m sharing my thoughts on The Cut by Chris Brookmyre.
Happy publication day to @markhillwriter as The Woman In The Wood is out today.
Today I shared my thoughts on Two Wrongs, the latest novel by @mcgrathmelj
@mandie163.mg shares her thoughts on Blue Night by Simone Buchholz.