Today is it my turn to join in this blog tour with a difference. Each day a different book blogger will be posting an extract from the prequel to CS Duffy’s brilliant Darkness Series and you can follow along as I’ll be posting a link to the next part of the story at the end of the post. In case you’ve missed any parts so far, you can find them at the following links:

Part One: Chapter In My Life

‘Look with all due respect —’

Lorna gritted her teeth to keep her smile from slipping. There was something about men who said things like with all due respect that made her nut them, but she firmly reminded herself that this Adam Flanagan was doing her a favour meeting her at all. His email address had been at the bottom of the article in the Bishopbriggs Herald on the Robroyston Park murder from twenty years ago, but she hadn’t expected a response.

Adam took a sip of his latte and wiped his mouth with a napkin in a pernickety way Lorna found irrationally annoying. ‘The truth is, I was spinning a wee centre fold story out of not very much. Though the case is technically unsolved, te police believed it was a mugging gone wrong.’

‘Elaine MacPherson still had her purse and all her money on her.’

Adam nodded. ‘Aye, the police reckoned most likely the attacker got spooked. He hit her on the head with a rock, but it might only have been meant to stun her a bit and when she collapsed he panicked and scarpered. I spoke to the officer who had been in charge of the investigation, and he said there was a theory at the time it was some kind of gang initiation, but I didn’t find any reports of similar crimes that would back that up.’ Adam shrugged. ‘It’s a really sad case with her being a single mum and all, but not worth your while investigating further, if you ask me.’

Lorna sat back in the imitation leather chair with a sigh. The city centre coffee shop was packed with tourists and students, and the huge window was steamed up. Lorna could just make out a faded message and drawing someone had done in the condensation of what could be a hose or a fountain but most likely was not. She had an open notebook on her lap, ready to make notes on any leads Adam could share with her, and now she felt a bit daft.

‘Did you find out anything about what happened to the son?’ she asked. ‘I couldn’t find much on him.’

‘Went into care I think, there didn’t seem to be any other family, which, as awful as it sounds, could be a reason for it all getting a bit swept under the carpet. If there’s no breakthroughs after a few months and no loved ones keeping the pressure up —’ Adam shrugged again. ‘They’ve only got so many resources, you know.’

‘Have you heard anything about the Dancing Girl Murders, down in London?’

‘Aye, so?’ Lorna raised an eyebrow and was gratified to see his grin slip.

‘I mean, you could spin a story out of it for your class, I’m sure. But you’d need to back it up with sources and evidence, and —’

‘Hold on, just let me write that down —’ Lorna interrupted. ‘Sources, you say? How are you spelling that?’

Adam put his hands up in surrender. ‘I’m not saying don’t look into it, I’m just saying —’

‘Ach it’s your time to waste, I suppose.’ Adam finished his latte and fumbled in his pocket for his wallet, bringing out a dummy instead. He looked at in surprise. ‘Sorry, my wife is home with him today.’

‘Thanks,’ he said. ‘Good luck with your course.’

You can read on tomorrow at An Author Writes

You can by the Darkness series at the following links:

Dark Of Night: Episode One 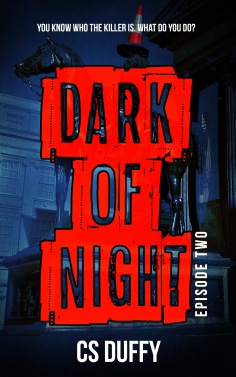 Just Before Dawn: Episode One

Dark of Night: Episode One

Just before Dawn: Episode One

C.S. Duffy writes psychological suspense thrillers with a healthy dose of black humour. Her background is in film and TV. She has several projects in development in Sweden and the UK and her other writing has appeared in Elle Canada and The Guardian. She is the author of Life is Swede, a thriller that was originally written as a blog – leading several readers to contact Swedish news agencies asking them why they hadn’t reported the murder that features in the blog. She is the author of Dark of Night and Just Before Dawn, a thriller series set in Glasgow which was selected for a Spotlight slot at this year’s Bloody Scotland.