Today it is my great pleasure to be joining the blog tour for The Warning the latest novel from Kathryn Croft. My thanks to Kim Nash of Bookouture for inviting me to join in and for providing and advance copy for review. Here is what the book is all about:

My little boy’s room was empty, his bed neatly made. Alarm bells should have rung immediately. Then the knock on the door came. All I remember is a thick fog wrapping itself tightly around me. This couldn’t be happening to us.

Three years ago, nurse Zoe’s son Ethan was found drowned in a muddy river by their home, along with his best friend Josh. With no witnesses, their deaths were ruled a tragic accident.

Heartbroken, Zoe and her family, move away from her home. They’re just beginning to get back to some kind of normality, when, out of the blue, Zoe receives an anonymous email:

You need to find out the truth about what happened to your son. Don’t let this rest. Don’t believe the lie.

Shaken, Zoe starts an obsessive hunt for the truth. But why is her husband so reluctant to help?
And why is Josh’s mother so determined not to believe her?

An absolutely unputdownable psychological thriller about a mother’s desperate search for the truth. Fans of The Girl on the Train, and Gone Girl will be hooked from the very first page.

It is hard enough to lose a child in an accident. The toll of such heartbreak can tear families apart. But having survived the tragedy once, can Zoe’s marriage last when she is faced with the awful truth that her son’s death may not have been an accident after all. When she is faced with an email claiming that there was more to her son’s death was more than it appears, Zoe is determined to find out not just who sent the e-mail but if there is any truth in it while her husband Jake just wants to dismiss it as a cruel prank. As she sets on about finding out what really happened that night she is faced with all manner of obstacles and truths she may wish she had never learned.

This is very much a slow building and suspenseful read, full of emotional turmoil and secrets which are gradually uncovered as the story progresses. As in all books I have read by Kathryn Croft, there is a strong lead character, one who is quickly established and easy to like, and whose determination to find out the truth really drives the story onward. There are many characters who make up this story with the chapters told from different points of view, predominantly Zoe, but also Jake, their son Harley and Roberta, whose son, Josh, also died along side Zoe’s son, Ethan.

Interestingly it is only Zoe’s chapters that are told in first person, pulling you completely into her world as the one frantically trying to find the truth. The others are told in third person present, making you feel a touch removed from their actions. This is an intriguing way of writing the book as at some stage you envisage that all of them are hiding something and this just adds to the intrigue. Certainly Roberta knows more than she is saying and Jake has a pretty big secret he is keeping too.

Set against all of this though, are chapters told by an, as yet, unknown narrator. You get a really sickening sense of foreboding as you read them, not knowing how they fit into the story but knowing that something unsavoury is happening, something which will blow the whole thing wide open. These scenes may make you uncomfortable as you can tell what is happening but perhaps not quite in its entirety.

There are some moments of great tension in this book, in spite of it essentially being a cold case. The ending has plenty of drama as well as some final revelations which may surprise you, and there are one or two moments along the way which certainly move the story away from your average family drama. There is one scene, involving Roberta and her husband which I found a little incredulous and you may have to suspend disbelief over the aftermath, but it didn’t detract from my enjoyment of the book which I read in around a day.

All in all, The Warning is a story full of suspense, tension, secrets and lies and I thoroughly enjoyed it.

If you would like a copy of The Warning it is available now from the following retailers:

Kathryn Croft is the bestselling author of six psychological thrillers, and to date has sold over one million copies of her books. The Girl With No Past spent over four weeks at number one in the Amazon UK chart and her other novels, Behind Closed Doors, The Stranger Within and The Girl You Lost all reached number one in the psychological thriller charts.Her seventh psychological thriller is due to be released in October 2018. After six years teaching secondary school English, Kathryn now writes full time and lives in Guildford, Surrey with her husband and young family.  Having always been an avid reader, Kathryn believes in the power of words to entertain, teach and transform lives. She is also a firm believer in following your dreams and says anything is possible if you work hard enough and never give up!Author Links: Website ~ Facebook ~ Twitter 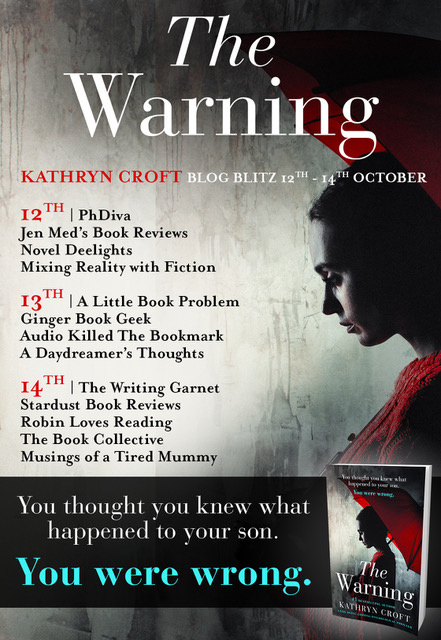