Today it is my great pleasure to be able to bring you an extract from The Syndicate by Guy Bolton, the sequel to The Pictures. Before we take a look, here is what the book is all about. 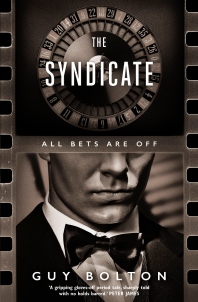 The hotly anticipated sequel to The Pictures. Guy Bolton’s unforgettable 1930s Hollywood fixer Jonathan Craine is thrust into the dark underbelly of the LA mafia, only to discover more secrets and lies

Eight years have passed since the events of The Pictures.

Jonathan Craine has left his old life in Hollywood behind him, content to live out his days on a farm in rural California with his teenage son.

But when infamous mobster and Las Vegas founder Bugsy Siegel is killed at his home in Beverly Hills, Craine is forced to face his past once again.

Summoned to Las Vegas to meet mob head Meyer Lansky, Craine is given the impossible task of finding Siegel’s murderers. He has no access to crime reports, no police contacts and no one to help in his investigation other than an ageing hit man and a female crime reporter with her own agenda. But Lanksy’s orders aren’t to be ignored; if Craine can’t find Siegel’s murderers in five days, he and his son will both be killed.

He parked the car half-way down Linden Drive and went the rest of the way on foot.

The heat had been unbearable the past few days, but the man was wearing a long dark rain jacket with the collar up and hat pulled down low like he was braced for winter.

He was moving down the sidewalk at a pace he hoped looked casual. For the most part, it was quiet at night in these wealthy suburban roads, but then out of nowhere a series of limousines could turn up as people arrived home from the pictures or a supper club some- where. He wondered what they’d make of him with his long coat and the trumpet case at his side.

The man continued down the curb, counting mailboxes as he went: 804 . . . 806 . . . 808. He stopped thirty yards from 810 and idled on the fringes of the neighbor’s driveway. House 810 was a Spanish villa with two stories, but although the drapes were drawn, there was no light from inside and no sounds either. Good: they weren’t home yet.

The man pulled back his sleeve and checked his watch. 10:20 P.M. or thereabouts; it was hard to tell in this light. The party was supposed to be back any minute now.

There were no cars on the neighbor’s driveway and no signs that anyone was home, so he came off the sidewalk and made his way up the lawn toward the side of the house.

A fence separated the gardens of the two houses, but it wasn’t more than six feet high and there was no barbed wire or security spikes. In the neighborhood where he grew up, people lucky enough to have backyards put broken glass on the tops of their walls. Beverly Hills was a far cry from Brooklyn.

The man checked over his shoulder to make sure no one was watching, then slung the trumpet case over the other side. He put his hands on the top of the fence and tugged. Flat and sturdy. It would take his weight. He was about to pull himself over when the bushes lit up around him.

He ducked instinctively. He stayed very still, craning his neck a little to see the road.

There was a car coming down this way. He saw his own shadow twist and bend across the fence panels as the car continued down the road. They hadn’t seen him.

When he was sure it wasn’t coming back, the man pulled himself up and over the fence and landed with two feet firm in a flower bed on the other side. He was wearing his old army boots but the soles were worn down and shouldn’t leave traceable prints. He kicked at the earth around his feet just to make sure.

From his position the party’s house was completely visible. There were four arched windows on the ground floor facing the lawn, each seven feet tall and more than large enough to see the living room inside.

He opened the trumpet case and unwrapped the cotton blanket inside, taking out an M1 carbine with a straight fifteen-round box magazine.

The shooter hadn’t fired his carbine since the war. Most men in his business used Thompsons or short-barreled revolvers. The M1 was a .30 caliber semiautomatic weapon he’d fired countless times in battle, fitted with a sliding ramp-type sight that was adjustable for windage. Hardly necessary for these conditions. The living room windows were barely thirty yards away.

He waited, crouching in the bushes for what seemed like a long time, slowing his breathing, allowing his night vision to adjust and taking in his surroundings. He could hear distant traffic and the rustle of trees and bushes but little else. It was so quiet now he could hear his watch ticking.

He was starting to lose patience when he heard an engine echo from the other side of the house and a moment later the lawn was illuminated as a car pulled into the driveway and up into the open garage.

The man lay still. The engine stopped. He heard car doors open- ing and then the sound of talking. The unseen group entered the house through a side door, and once again there was no other sound but that goddamn watch of his.

He focused on the window to the living room. A light came on and two men stepped inside. They closed the door behind them. They were alone.

The shooter strained to see as the two men moved around the room. The first man was slight of build, with a cigarette drooping from his lip. Allen Smiley. The other man was broader in the shoulders and wore a pinstripe suit. Yes, it was him. It was Bugsy Siegel.

Jesus. Seeing his face was a reminder of the stakes involved.

The man rose from the bushes, lifted himself to one knee and raised the carbine to his shoulder. He checked his left foot was planted firmly, slowed his breathing and leaned his eye toward the rear aperture sight.

As his breathing became shallow and deliberate, he inched a little to his right until the barrel was directly facing the central window. Another car, but this time he ignored it. He was completely focused.

A girl came in the room with the third man. Ah yes, he remembered. That girl. He teased the sight over her pert nose before moving it over to her boyfriend. The two of them left the room giggling and drunk, and only the pair of mobsters remained.

The two friends were pouring drinks, playing music, laughing and talking. Moving targets. But as he followed him in his crosshairs, Siegel sat down on the davenport sofa facing the windows, moving out of his line of sight.

The shooter pulled his eye away and craned his neck for a better view. He could make out the edge of Siegel’s shoe and the corner of a newspaper. He twisted in his spot, even sidling a foot or so to his left, but it was no use. The angle wasn’t right. Siegel wasn’t in shot.

He was half-hoping Siegel would stand up again but he knew there wasn’t time. He’d have to get closer.

Twenty feet between the windows and where he was now was a willow tree. From that vantage point there was no way he could miss Siegel. But would he be caught running out into the open? Was it dark enough?

The shooter breathed in and out slowly several times and then pushed himself off his heels. A part of him had to accept that Siegel could spot him any second, but there was no stopping now. He ran at a crouch across the lawn toward the house, placing his feet quickly one in front of the other, trying not to make a sound.

When he reached the willow tree he stopped and looked ahead. The two men were preoccupied, talking between themselves. They hadn’t seen him.

He was breathing hard now, struggling in the heat. He was worried they would hear his rasped breaths. There was no time to waste. He lifted the carbine again and pulled it firm into his shoulder.

Good, his line of sight was clear.

The pin was filed down to make the shots faster but after the first round he knew the recoil would ruin his aim. After the second he’d more or less be firing blind.

He found Siegel in his sights again, then moved his finger toward the trigger.

Slowly, with careful deliberation, he lifted the bolt and slid it back. His movements were firm and purposeful: too fast and the metallic click would be audible; too slow and the round wouldn’t chamber properly and he’d have a stoppage. He heard the familiar sound of a cartridge entering the breach, then ran his finger down the slide to check the working parts had moved forward. Yes, it was correctly loaded.

The shooter pushed the safety off with his thumb, allowed himself a series of shallow breaths, then focused on the crosshairs.

He blinked. His body tensed. His eyes adjusted.

Siegel was still sitting on the sofa, a plume of smoke drifting from his mouth. The shooter lined up front and rear sights until the top of his crosshairs was nudging Siegel’s head. He could see his teeth glisten.

An exhale of breath.

He counted to three in his head, then squeezed the trigger. Felt the resistance. Pulled past it.

The noise and the recoil disturbed his aim but he found the target’s center mass and pulled the trigger again and then two times more.

There was no need.

The first shot was accurate: the bridge of Siegel’s nose caved in like a crushed soda can, blood and brain matter spilling in all directions. His left eye popped clean out of the socket.

The noise was deafening, almost disorienting. The shooter fired again, destroying a marble statue on a grand piano before lowering the barrel a fraction to adjust to the recoil. He fired four times more. Two rounds hit Siegel in the chest.

In barely five seconds he’d fired nine shots. He wasn’t sure how many had gone wide but it didn’t matter. Benjamin Siegel was well and truly dead.

If that has got you all intrigued, you can find a copy of the book at the following retailers:

GUY BOLTON lives in London and has worked in publishing, film and television. He is also a screenwriter whose work has been optioned by Bedlam Productions, Hat Trick and Tiger Aspect. Guy’s debut crime novel, The Pictures, published last year, was shortlisted for the CWA New Blood Award 2017.