It’s my great pleasure to be able to share with you an extract from The Ash Doll by James Hazel, the second book in the Charlie Priest series which is released in paperback on 20th September. Here is what the book is all about. 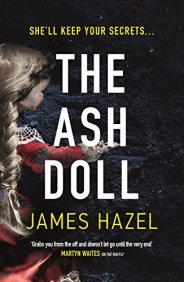 The past had been buried. But now someone has remembered . . .

Prolific lawyer Charlie Priest has bet his career on one case, but when his star witness turns up brutally murdered on the first morning of the trial, things start to fall apart.

Priest knows there’s a vicious killer out there, but as the bodies begin to pile up, he soon realises that he’s caught in a web of corruption that protects a deadly secret: one that threatens to tear him and those he cares about apart. And Priest has demons of his own to battle, suffering from dissociative disorder, a condition so destructive that it leaves him questioning the truth of his own existence.

Can Priest uncover the truth before it’s too late?

Rose scrambled up the last few feet of hillside where the incline banked sharply, and mossy turf gave way to a stone ledge running across the cliff. The light was fading and the air was cold and damp. She hurried over the crest but knew that she had to watch her step. As the path narrowed, only a series of rotting fence posts joined with wire separated her from the waves crashing on the scree below.

There was a small gathering of people ahead of her where the path widened out before it disappeared altogether as the cliff ended abruptly, falling away at an almost perfect right angle where it would eventually meet the flatter coastline. As she approached, one of the figures broke from the group and hurried to meet her.

‘Thank goodness, Rose,’ the woman gasped. Rose recognised her as the tall widow who kept the flower shop in the nearby village of Tome, but the name eluded her.

‘I came as soon I could,’ Rose explained, sensing the panic in the flower-woman’s voice.

‘Not a moment too soon.’

The flower-woman ushered Rose through the group who parted for her, their grim faces barely registering in the dusk. There were a few she recognised from the town and even a couple she could put names to. Being two months into her post with the local constabulary, she felt she really ought to know all of them, but Rose was damned if she could tell one face from another in this light.

‘What took you so long, Officer?’ growled a voice obscured beneath the hood of a raincoat. The garment would have swamped a basketball player, let alone the dumpy character wearing it. She ignored the insinuation and allowed herself to be led to where the wire fence cut across them and a yellow sign warning of the dangerous sheer drop swung precariously in the wind.

Near the edge, a cracked wooden sign bearing the name of the cliff jutted out of the ground at an angle: devil’s point.

‘Who found her?’ asked Rose to the flower-woman.

‘Vern was leading his history group up here.’

‘What was a history group doing up here at this time of night?’

‘Well, it’s more of a ghost walk, if you ask me. The cliff is supposed to be haunted by the ghost of a Celtic sailor who—’

Rose raised her hand irritably and the woman had the good sense not to continue. Rose lowered the wire and stepped over it; it was astonishing how brittle the safety perimeter was.

She stopped and stared ahead. Behind her, the dying sun was plunging into the horizon, its final burst of energy igniting the foot of the night sky with a deep crimson gloss. Rose swallowed hard. Standing on the edge of the cliff, her hair caught in the breeze, was a young girl of no more than ten. She faced outwards towards the sea, her hands outstretched looking for all the world as if she might suddenly sprout wings and dive into the grey abyss.

She looked back, as if the flower-woman might be able to offer some explanation. She was met with an array of blank faces.

‘Hello?’ Rose called gently, careful not to startle her.

At first, the girl did nothing but, when Rose called again, she turned her head and Rose caught a glimpse of a pale, tear-stained face.

‘Sweetheart, I’m a police officer. You’re standing very close to the edge. Can you step back towards me?’

The girl didn’t move. Rose edged forward. The girl was perilously close to the brink – a strong, unexpected gust might be enough to send her over.

‘You’re safe, honey. You just need to turn around, slowly and carefully.’

The wind whipped around her face as Rose lowered herself to the girl’s level. She was seven or eight metres from Rose but, given the proximity of the danger facing her, she might as well have been a thousand miles away. Her heart racing, Rose extended her hand.

‘Can you tell me your name?’

‘Can you tell me where you’re from?’

Rose was about to move towards her when someone spoke from behind. The small man hidden in the oversized raincoat.

Rose followed the outstretched hand to the girl’s midriff, and down to where a ragged skirt flapped across her thin, bare legs. At first Rose thought it might be dirt. It had rained hard the night before and the ground was muddy in places.

But the rust-coloured patches running from underneath her white dress to her heels weren’t mud.

‘Honey,’ she whispered, ‘what happened to you?’

If that has got you all intrigued about the book, you can buy and e-copy or pre-order the paperback from the following links:

Before turning his hand to writing, James Hazel was a lawyer in private practice specialising in corporate and commercial litigation and employment law.

He was an equity partner in a regional law firm and held a number of different department headships until he quit legal practice to pursue his dream of becoming an author.

He has a keen interest in criminology and a passion for crime thrillers, indie music and all things retro.

James lives on the edge of the Lincolnshire Wolds with his wife and three children.