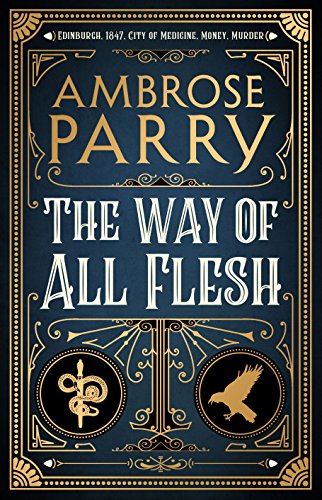 Today I am thrilled to be sharing my thoughts on The Way Of All Flesh by Ambrose Parry, a new writing team you may also know as Chris Brookmyre and his wife Marisa Haetzman. The book was released on 30th August but I was lucky enough to get a sneak read thanks to Netgalley and publishers Canongate Books. Before I tell you what I thought, here is what the book is all about.

In Edinburgh’s Old Town young women are being found dead, all having suffered similarly gruesome ends. Across the city in the New Town, medical student Will Raven is about to start his apprenticeship with the brilliant and renowned Dr Simpson.

Simpson’s patients range from the richest to the poorest of this divided city. His house is like no other, full of visiting luminaries and daring experiments in the new medical frontier of anaesthesia. It is here that Raven meets housemaid Sarah Fisher, who recognises trouble when she sees it and takes an immediate dislike to him. She has all of Raven’s intelligence but none of his privileges, in particular his medical education.

With each having their own motive to look deeper into these deaths, Raven and Sarah find themselves propelled headlong into the darkest shadows of Edinburgh’s underworld, where they will have to overcome their differences if they are to make it out alive.

I’ve got to be honest. I don’t typically read a lot of historical fiction, that’s more Mandie’s cup of tea. But there was something about this story that intrigued me, possibly down to the writing team behind it, but also just the sound of the story. Having been very fortunate to hear a couple of readings from the book at Bute Noir early last month, including hearing the pair talk about the book and how it came to fruition, I knew I’d made a wise choice. As soon as I started to tuck into those opening pages I was gone, lost in a world of 19th Century Edinburgh inhabited by the delightful Dr Will Raven and Sarah Fisher. And believe me, lost is the right word as in no time at all I was twenty-five percent of the way through and tearing through the story in what felt like a blink of an eye.

The story opens in intriguing fashion. We meet newly qualified Raven on the eve of his starting an apprenticeship with the esteemed Dr Simpson. As we quickly learn, Raven is not typical of the type of men you would associate with the practice of medicine, his history, and immediate present, a little checkered, the company he appears to keep and to attract, of the less salubrious variety. From the opening we get a taste of what is to follow although no hint as to what may have happened, as Raven discovers the body of a young woman, previously of his acquaintance, who appears to have suffered a horrific death. Sadly it appears that she is just one of many, and what follows is the slow uncovering of foul play on the streets of Edinburgh, a truth that Raven, assisted in no small part by Dr Simpson’s housemaid Sarah, is determined to uncover.

Now it is hard to discuss the book or its plot further that this, as to do so would give vital clues as to what is to transpire. Needless to say, as you discover the nature of Raven’s chosen field of speciality, you may take a hint as to what you will discover in the coming pages, but not the who, the why and the how of it all. Despite the setting, the era in which the book is set, the story is truly compelling and the very nature of the patriarchal system and the sense of right and wrong which pervades the novel very authentic. Sadly there are truths in this book which still exist in society today, although thankfully the practice of medicine is decidedly less brutal. Can you even imagine having a limb amputated, deliberately I might add, without the aid of an anaesthetic or pain killer of any sort? Me either, but that is what you are faced with here.

I loved the characters of Raven and Sarah. Sarah is a woman very much ahead of her time, at least in the eyes of her peers and her ‘betters’ but reflective of the sentiment which was starting to prevail. A young woman who is capable of and who wants far more than her circumstances would allow. She is astute, very intelligent, and gets the best of Raven on more than one occasion, her tenacity and determination making me smile. There are certain feelings of inevitability to her actions as you know she will not be bested by a mere man, but still, I was rooting for her. As for Raven, he is a man of contradictions, but clearly one who is hiding something, a matter which is not revealed to the reader until you are one hundred percent on his side. And you will be as, despite his initial attempts at grandeur, he is a man who lacks the true pomposity of many of his peers and who is simply trying to get to the truth. Both are brilliant characters and make for a formidable and highly likeable pairing. I can’t wait to meet them both again.

I am always concerned when reading historical fiction that there will be a tendency to make the language too flouncy or pompous, inaccessible in the way it is presented and, well quite honestly, off putting. Not so in this case. The story simply flowed and while feeling very much of the period, there was still a sense of pace and rhythm which made the reading experience highly enjoyable. Full of mystery and with moments of great tension, notably near the start and end of the novel where our hero Raven is in great peril, there is something about the read which had me completely engrossed and it is kind of hard to tell you why.

It wasn’t particularly dark, although in terms of story and the truth of history it makes for grim reading. It wasn’t the thrill of the chase unless you count a couple of emergency carriage rides across Edinburgh to attend to women in labour. Whilst there are moments of mirth, it isn’t that it was a particularly funny read either. I think it boils down to good, old fashioned, bloody brilliant story telling. Nothing more nothing less. This book comes highly recommended from me.

If you would like a copy of The Way of All Flesh for yourself then it is available now from the following retailers:

Chris and Marisa will be appearing at this years Bloody Scotland festival, on Saturday 22nd September, talking all things Ambrose Parry and The Way of All Flesh. It’s not too late to get tickets to the festival although they are selling fast. The festival runs from 21st to 23rd September in Stirling, and you can find those all important tickets right here.