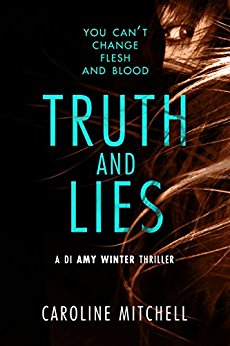 Today it is my absolute pleasure to be taking part in the blog tour for first book in the brand new series from Caroline Mitchell, Truth and Lies. My thanks to Eleanor Hemming at Midas PR for inviting me to join the tour and to the publisher for providing an advance copy for review. I’ll be sharing my thoughts on the book in just a moment, but here is what it’s all about. 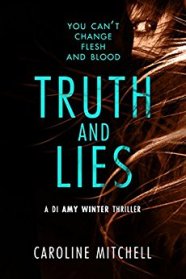 DI Amy Winter is hoping to follow in the footsteps of her highly respected police officer father. But when a letter arrives from the prison cell of Lillian Grimes, one half of a notorious husband-and-wife serial-killer team, it contains a revelation that will tear her life apart.

Responsible for a string of heinous killings decades ago, Lillian is pure evil. A psychopathic murderer. And Amy’s biological mother. Now, she is ready to reveal the location of three of her victims—but only if Amy plays along with her twisted game.

While her fellow detectives frantically search for a young girl taken from her mother’s doorstep, Amy must confront her own dark past. Haunted by blurred memories of a sister who sacrificed herself to save her, Amy faces a race against time to uncover the missing bodies.

But what if, from behind bars, Grimes has been pulling the strings even tighter than Amy thought? And can she overcome her demons to prevent another murder?

Now I have been a fan of Caroline Mitchell for quite some time. Never being great at reading in order my first read was The Silent Twin and from there I was hooked and I have raced through every title she has released. When I heard that she was releasing a new Detective Series I was doubly excited. Not that I didn’t like the stand alone thrillers – I did, they are fab and you should read them – but because Caroline Mitchell has great experience in the world of policing and detecting and this really shines through in her work giving that extra edge of authenticity to an already gripping storyline.

Truth and Lies is an absolute cracker. In this book we meet DI Amy Winter at a very difficult time. Having just buried her father she is faced with an awful truth from one of the most reviled killers in recent history. Unwillingly, she is brought in to bring closure in the case of a pair of serial killers whose final victims bodies were never recovered. But being involved comes at a price. Is it too high a price for Amy to pay?

From the very beginning of this book I was caught, hook, line and sinker. It is quite a dramatic opening, a newspaper report on the crimes perpetrated by the pair – Jack and Lillian Grimes –  giving us the bare outline of what has happened and the direction this story may take. The author then leads us to 1986, and the incident which was the beginning of the end for this pair of brutal killers. And once you have read these two chapters you will be hooked. I started reading while I was waiting for my train to Edinburgh and I had to pack the kindle away when the train was nearly due or there was every chance I would have missed it as I was so engrossed in the reading.

In essence, the story boils down to mind games on the part of the sole remaining murdered, Lillian Grimes, who seems determined to suck Amy into her twisted world, no matter what. To complicate matters, Amy is faced with a personal dilemma. Does she reveal the very personal link she has to the killer and potentially damage her career and the case, or does she keep it a secret and face the consequences? Now Amy is a highly principled Officer, very meticulous and good at her job and I really liked her, but sometimes I did find myself frustrated as I wish she had been more honest from the start. I get why she wasn’t, and to be fair as a plot device it is a far more dramatic premise, but she risks being compromised by her silence. Still, despite all of the truths she uncovered, she remained unwaveringly resilient and determined and I couldn’t help but like her.

Caroline Mitchell really does create great characters, and people you love to hate. Lillian Grimes is an example of this, someone as dark and twisted as you could expect from a serial killer. Or is she? There are one or two moments which may give you cause to doubt. Was she merely caught up in Jack’s crazed state of mind just like everyone else? The trouble is that it is, for the most part, her word against the evidence, as the fractured memories of Amy only slowly begin to return. There are times when it is clear that Lillian may well be another innocent victim and there is much uncertainty over the evidence against her adding another layer of doubt and unsettling you as a reader and your surety of what is going on. Aside from the two central characters, you have those who circle around Amy’s world, DCI Hazel Pike and DS Paddy Byrne amongst others. All richly drawn characters they add texture to the story. Paddy in particular I liked, although he has his own demons to battle which will have you in two minds about him too.

Being part cold case and part new, the pacing in this book varies but the tension never ceases and the atmospheric nature of some of the scenes will give you chills. The story is told over a dual timeline. Most of it is told in the present day, shadowing the investigations in real time but on occasion we are fed the slowly returning memories of a little girl, the only person strong enough to make a stand against the murderous duo, albeit a reluctant and not entirely conscious one. You will feel your heart break for little Poppy, her emotions divided and her will uncertain as she is removed from the only reality she has ever known. Caroline Mitchell has done an excellent job of presenting the truth through a child’s eyes, one who sees everything but does not have the benefit of age and experience to understand all that she is seeing.

My only regret about the whole book? They never did find Hammy …

If you are looking for a creepy, thrilling, tense and atmospheric story of manipulation and murder then you really ought to pick this up. Be prepared to lose great chunks of your day mind as when this book gets a hold of you, it won’t want to let go. Top stuff.

If you would like a copy of Truth and Lies it is available now from the following retailers:

Caroline originates from Ireland and now lives with her family in a pretty village on the coast of Essex. A former police detective, Caroline has worked in CID and specialised in roles dealing with vulnerable victims, high-risk victims of domestic abuse, and serious sexual offences. She now writes full time.

Caroline also writes psychological thrillers. The most recent, Silent Victim, has been described as ‘brilliantly gripping and deliciously creepy’. Her new DI Amy Winter series is published by Thomas & Mercer and launches 2018. 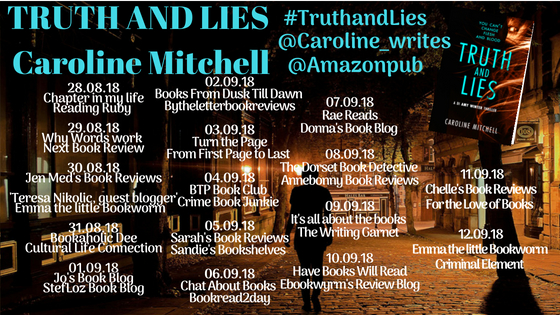 Sunday starts right here. One skinny cappuccino and a side order of Dolly Parton and James Patterson.
Today I’m sharing my thoughts on The Twyford Code, the very clever new thriller from Janice Hallett.
Some fabulous #bookpost today #gifted by Head of Zeus - Mark Hill’s upcoming stand alone novel, One Bad Thing.
A lovely @bertsbooks subscription box delivery yesterday - #Demon by @mattjwesolowski and #BitterFlowers by Gunnar Staalesen. Both from @orendabooks wonderful collection.
A bit of my book collection - my @orendabooks shelfies.
Fabulous #bookpost today #gifted from @hodderbooks - The Hunting Ground, the brand new Finn & Paulsen thriller from Will Shindler.