Oh my. What a lovely weekend I have just had. Not to brag or anything but I have spent it on the lovely island of Bute combining a little sightseeing with attendance at this years Bute Noir festival. In spite of all my visits north of the border, I have never been to a Scottish Island before. I can quite honestly say that even after just a few short days I have fallen in love and it is with the deepest of regrets that I have to travel home today. (It’s not without checking out available accommodations first and working out that I can actually afford to buy a flat up here but that is an entirely different story …)

I’m not going to say too much about Bute Noir here as (providing I can find the words) I want to sum it up separately. What I will say about it is that it is a wonderful wee festival and I would heartily recommend it to anyone who finds themselves at a loss the first weekend in August. I have to take three trains and a ferry to get here but I’d do it again in a heartbeat and (finances and other matters permitting) I intend to try my hardest to return next year.

What I will talk about here is Bute itself. Everyone we have spoken to here has been so welcoming and it (Rothesay) was such a warm and hospitable town that it’s worked its way right to the top of my favourite festival venues. Probably second only to Bloody Scotland in Stirling right now which is quite the compliment. As well as attending the festival, Mandie and I took a little time to explore and enjoy the island, taking a few walks around and about Rothesay, and also took an open top bus tour on the Sunday morning to see more of what Bute had to offer. 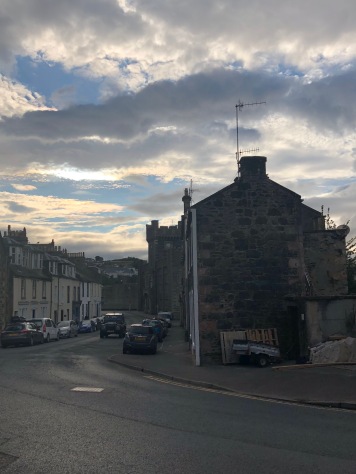 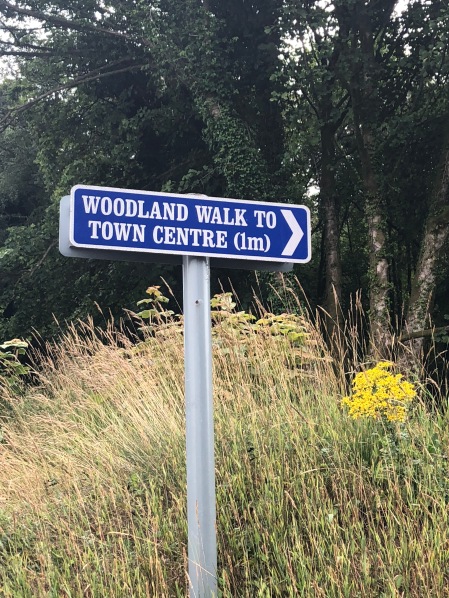 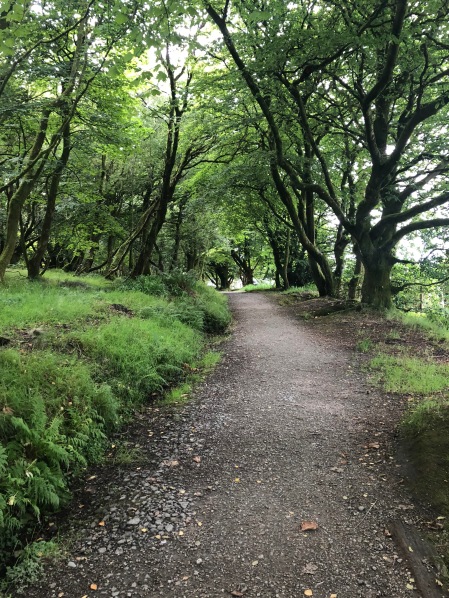 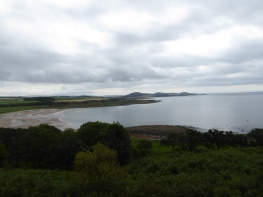 We went on woodland walks, saw Belties, beautiful sights, paddle steamers and still had time to wash it all down with a few tidy lattes, some Empire biscuits (that’s booby biscuits to Emma Welton and Eva Merckx) and a lovely sausage supper which we ate on the seafront whilst being watched by two seagulls I christened Kevin and Dirk. Even the gulls are more polite and relaxed in Bute. If this had been the seafront at Rhyl, we’d have had our hands torn off as they tried to get to the chips. Kevin and Dirk just sat patiently and watched us (although Kevin was a little noisy at times to be fair). 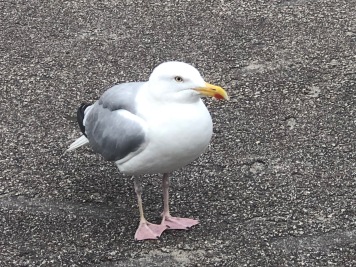 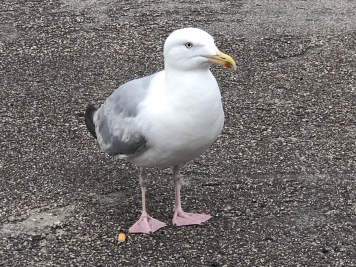 In case you’re wondering, Kevin is the gull on the left … I also have a lovely snap of him taking a bath in the crystal clear waters surrounding Bute but that’s a little risqué for pre-watershed blogging …

So with all this Bute Noir-ing going on, did I manage to do any normal blogging type duties? Well – yes as it happens. Perhaps not as much as some weeks but enough to keep the wolves from the door. Or to keep on top of my reading anyway. Book post wise – none this week (I don’t think anyway and as I’m not home right now to check, we’ll go with that and if I’m wrong I’ll correct it next week.)

Netgalley wise I have had two books. Jenny Blackhurst’s The Night She Died and John Marrs’ Her Last Move. Both are blog tour related so totally forgivable. Ish. Purchase wise, I have a few. One Amazon Prime deal type book thingy, I Will Never Leave You by SM Thayer, Ed’s Dead by Russell D McLean (which I can’t believe I didn’t actually already own but there you go); plus A Rising Man and A Necessary Evil by Abir Mukherjee. I also purchase Michael J Malone’s After He Died and Alexandra Sokoloff’s Screenwriting Tricks for Authors whilst at Bute Noir.

Books I have Read

Here are two things I know about my mother:
1. She had dark hair, like mine.
2. She wasn’t very happy at the end.

Anna has always believed that her mother, Debbie, died 30 years ago on the night she disappeared.

But when her father gets a strange note, she realises that she’s never been told the full story of what happened that night on the cliff.

Confused and upset, Anna turns to her husband Jack – but when she finds a love letter from another woman in his wallet, she realises there’s no-one left to help her, least of all her family.

And then a body is found…

Very much in the line of domestic suspense, this is the story of Anna’s search to find her birth mother and the slow uncovering of just why she disappeared in the first place. Told in a dual timeline style this is a very clever piece, not quite noir but certanly a very keen study on the family relationships and issues which many people will identify with. I’m on the tour later this week but you can purchase a copy of the book here.

When freelance journalist, Crystal Nguyen, heads to South Africa, she thinks she’ll be researching an article on rhino-horn smuggling for National Geographic, while searching for her missing colleague.

But within a week, she’s been hunting poachers, hunted by their bosses, and then arrested in connection with a murder. And everyone is after a briefcase full of money that may hold the key to everything…

Fleeing South Africa, she goes undercover in Vietnam, trying to discover the truth before she’s exposed by the local mafia. Discovering the plot behind the money is only half the battle. Now she must convince the South African authorities to take action before it’s too late. She has a shocking story to tell, if she survives long enough to tell it…

Fast-paced, relevant and chilling, Dead of Night is a stunning new thriller that exposes one of the most vicious conflicts on the African continent…

Full of action, this is one fast paced stand alone thriller from the writing team which gave us the wonderful Inspector Kubu. Set largely on and around an African game reserve, this thriller touches on issues linked to conservation and endangered species in a story which will have you on the edge of your sear and biting your nails at the tension. I’ll be sharing my thoughts as part of the blog tour soon but you can order a copy of the book here if you can’t wait.

‘Simply unputdownable… makes the little hairs on your neck stand on end.’ B for Book Review, 5 stars

Somewhere in this city… she’s waiting to be found. When the body of an innocent woman is found stabbed in her otherwise pristine bedroom, Detective Tom Fabian is called in to lead the investigation. It’s the latest in a series of seemingly random murders all over London, which Tom suspects might be linked… but how?

Just when Tom feels all his leads have run dry, he discovers a startling connection between the victims. The killer is tracing a sinister web of murder through the capital – but where does it lead, and who is next?

But then another victim is found, just as Tom’s wife and teenage daughter find themselves in grave danger. Is it a coincidence, or has his job put his family at risk? Has Tom unknowingly sacrificed those he loves most to the darkest case of his career… and can he catch the killer before he strikes again?

A completely gripping, pulse-racing crime thriller that will keep you guessing until the last page. Perfect for fans of Melinda Leigh, Mark Edwards and Robert Dugoni.

Oh I do love me a Richard Parker book and this is another brilliant release, hopefully just the first of many in a series and featuring a great new Detective, Tom Fabian. A serial killer is prowling the streets of London with a very chilling pattern in mind, but just who and why remains to be seen. I’ll be sharing my thoughts as part of the blog tour but you can preorder the book (previously titled Murder Map) here.

Three books. Not my best week, not my worst. But I have been busy (at Bute Noir – did I mention it?). Blog wise, Mandie has been a busy bunny this week, taking up most of the slack but we managed most of a week worth of reviews with Sunday off for good behaviour. Recap below:

One Little Lie by Sam Carrington

Her Name Was Rose by Claire Allan

Murder by the Broads by Anthony Tamiozzo

Her Last Breath by Charlie Gallagher

Telegrams and Teacakes by Amy Miller

Murder on the Marshes by Clare Chase

The week ahead sees a few more blog tours underway, this time Do No Harm by LV Hay; Martha’s Secret by Joanna Larum; 11 Missed Calls by Elisabeth Carpenter; Kiss of Death by Paul Finch and The Affair by Sheryl Browne.

I shall be spending my week, reading, plotting and hopefully writing (just as soon as I get home). At least I hope I will. Oh and hopefully doing a little piece on my attendance at Bute Noir. It won’t be earth shatteringly informative as I was too busy concentrating on having fun to take notes, but it will have pictures. I remembered that bit at least.

Have a fabulously bookish week everyone. See you in seven days

I think this is possibly the ultimate @ragnarjo #winterkill collection. Thanks to @orendabooks for the #gifted trade hardback edition to add to my bookish collection. I now have all seven versions of the UK edition of the book, including audiobook (8 if you include the ARC). Love it.
Some fabulous #gifted #bookpost today from @avon_books - a copy of Good Girl by @mel_sherratt complete with evidence bag 😃
I was very lucky today to receive this #gifted proof of 21st Birthday by @jamespattersonbooks courtesy of @penguinukbooks . Really looking forward to reading it. It’s a beautiful proof, boxed, sprayed edges abs the box has a holograph candle on. Gorgeous 😍
Today I shared my thoughts on The Healer by @anttituomainen
Thank you @hqstories for the copy of #FindYouFirst by @linwoodbarclay. Really looking forward to reading it.
Today on the blog I share my thoughts on The Echo Wife by @gaileyfrey, #gifted by publisher @hodderbooks