What can you say about a week where the most exciting thing I did was engage in a stationery-off with fellow blogger insomniacs? I’m not sure who won but I did learn that I do not need to buy any new notepads anytime soon…

Work dominated this week, probably just as well as I’m only in three days next week – all important Harrogate shaped stuff to do don’t you know – so I have to pretend I am conscientious and all that blah, blah, blah … I did manage a trip out with Mandie yesterday with the express purpose of buying clothes. Didn’t exactly manage much of this but we did go to Thornton’s Cafe and have a lovely salted caramel ice-cream shake. I see this as a warm up for next weekend’s cream tea. My excuse and I’m sticking to it …

To be honest, it was nice to have a week of coming home every night and curling up on the sofa. Some times it’s the little things, right? It was a quiet week all round when it comes to book although I did get some lovely book post from Orenda Books – Dead of Night by Michael Stanley. It’s taken me a few days to realise but I am actually quoted on the cover of this book too. Only my second ever time as a cover girl and both of them Orenda so Karen and co – you have made me a very smiley book blogger. Thank you. 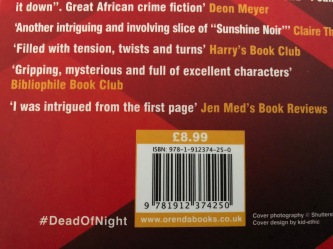 I was also part of a select few people treated to an early review copy of Carol Wyer’s latest novel, The Birthday, featuring a brand new protagonist, Natalie Ward, and her team. I ate this one up and I can assure anyone worried about Carol taking a break from her highly successful and, quite frankly, brilliant Robyn Carter series that you will love this one too. Definitely worth a preorder but you’re going to have to wait a while for my full review as I won’t share it here until blog tour time so there. :p

From Netgalley I have had two titles, both for blog tours so I can be forgiven – right? The Promise by Katerina Diamond and The Affair by Sheryl Browne. Purchase wise I have played catch up with a few titles it appears I had forgotten to order and a few new titles it was only right to pre-order. First up was A Patient Fury by Sarah Ward. Could have sworn I’d already bought this but apparently not. Now rectified. Next up was Cold as the Grave, the next Inspector McLean story from James Oswald. Kindle and hardcopy preorders in – I’m a collector don’t you know, along with a pre-order for the physical copy of No Time To Cry. Also on preorder is Tell Nobody by Patricia Gibney, the next Lottie parker mystery and somehow I had missed order The Date by Louise Jensen which I have now fixed.

Pretty good for me really. Less than last week at any rate. But I am about to go to Harrogate and I will get at least one bag of books there so I need to be sensible … 😉

Johnny and the Swamp Seeds are on the cusp of success when singer Johnny Richards goes missing. The body of a young man is found in the local canal.

But the dead man is not Johnny Richards.

DCI Jim Tyler leads the investigation into the brutal murder of Adam Lane, ex band member and friend of Richards since schooldays. Is the disappearance related? Is Richards alive or dead? Was he responsible for the death of his friend?

DS Danny Mills has concerns for DCI Tyler. The demons from Tyler’s past have caught up with him, threatening to tip him over the edge. Meanwhile, news of the singer’s disappearance has gone viral, sending the band to the top of the charts and turning a national spotlight on the case. Tyler is under immense pressure and Mills can see the cracks spreading.

Will Tyler and Mills find out what happened to Johnny Richards, and who killed Adam Lane – or is catastrophe looming for the stricken detective?

An interesting follow up to last year’s Red is the Colour, DI Tyler is wrestling with his demons as well as trying to solve the murder of a young man and the disappearance of an aspiring musician. I love the familiarity of the setting, just up the road from me, and this is a twisted tale in which no-one can be trusted. You can pre-order a copy here and my review will be out on publication day later this week.

When five-year-old Ava Sawyer goes missing from a birthday party at a local garden centre, the police are bewildered by the lack of leads. That is until two years later, when Ava’s body is found and another little girl, Audrey Briggs, goes missing. Audrey also attended that party …

Leading the investigation is Detective Natalie Ward . A mother of two teenagers, this case chills her to the bone, and is a disturbing reminder of the last job she worked on. One that ended very badly.

Natalie soon discovers that Ava’s mother has some worrying gaps in her alibi and as she digs deeper, she’s sure Ava’s father is not telling the full story. And what did the owner of the garden centre Elsa see that day? Something that she’s not telling Natalie …

Just as Natalie is facing up to the grim possibility that Ava and Audrey were killed by someone close to home, another little girl from the party doesn’t come home from her ballet lesson. Can Natalie find a way to stop this killer before more innocent lives are taken?

Gripping, fast-paced and nail-bitingly tense, this book will send shivers down your spine. Perfect for fans of Angela Marsons, Rachel Abbott and Karin Slaughter.

This is a story which will have every parent’s heart thumping in recognition of their greatest fear. How would you cope if your only child suddenly disappeared? Gripping, tense and full of shocks, I loved this new team from Carol Wyer and look forward to reading more in the series. It promises to be a cracker. Review to follow but you can bag a preorder right here.

The Emperor of Shoes – Spencer Wise

From an exciting new voice in literary fiction, a transfixing story about an expatriate in southern China and his burgeoning relationship with a seamstress intent on inspiring dramatic political change.

Alex Cohen, a twenty-six-year-old Jewish Bostonian, is living in southern China, where his father runs their family-owned shoe factory. Alex reluctantly assumes the helm of the company, but as he explores the plant’s vast floors and assembly lines, he comes to a grim realization: employees are exploited, regulatory systems are corrupt and Alex’s own father is engaging in bribes to protect the bottom line. When Alex meets a seamstress named Ivy, his sympathies begin to shift. She is an embedded organizer of a pro-democratic Chinese party, secretly sowing dissonance among her fellow labourers. Will Alex remain loyal to his father and his heritage? Or will the sparks of revolution ignite?

Deftly plotted and vibrantly drawn, The Emperor of Shoes is a timely meditation on idealism, ambition, father-son rivalry and cultural revolution, set against a vivid backdrop of social and technological change.

Every so often I will be lucky and find myself reading something quite extraordinary. Thanks to No Exit Press this is exactly what has happened. The Emperor of Shoes is a haunting tale with a key social conscience, steeped in true history and challenging how you think about the culture and history of China, this is quite a beautiful read that I devoured in a day. My review will be up soon for the tour, though quite how I will write it and do the book justice I do not know. You can pre-order a copy of it here.

I actually read three and half books but in a week where it has been too hot to think straight, I will take that. Blog wise it’\s been moderately busy, mostly thanks to Mandie. Here is a recap.

The Thieftaker’s Trek by Joan Sumner

Death on the Coast by Bernie Steadman

Happily Never After by Emma Robinson

Dancing on the Grave by Zoe Sharp

You’ll be delighted to hear that I have pulled my (considerable) weight for the week ahead. (Mandie is at least – you may be groaning). Reviews and blog tours to delight and scintillate. Or something. Only two tours this week for Blue Murder by Mark L Fowler and Summer on the Little Cornish Isles by Phillipa Ashley. 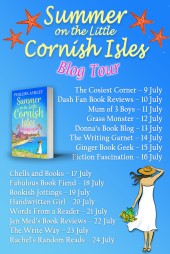 Hopefully I will be keeping up with blogging this next week but forgive me if the weekly post is late … I’m heading of to the Theakston’s Crime Festival in Harrogate so who knows what will happen. There will be posts. When and how many is anybody’s guess, but they will be there. My birthday weekend too so I’ll be partaking in the odd bit of celebrating with cake and coffee and such like. It’s not everyday you get older …

Have a fabulous week all, whatever you are doing. See you next time.