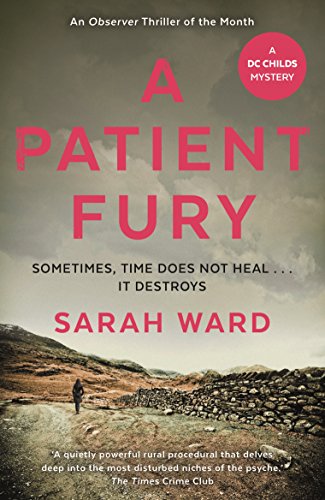 today it is my great pleasure to be taking part in the blog tour for A Patient Fury by Sarah Ward, now available in paperback and the third book in her highly successful DC Connie Childs series. This is my first time with Connie and we’ll find out in just a moment what I thought. My thanks to Emma Welton at damppebbles Blog Tours for inviting me to join the tour and to the author for providing a copy of the book for review. Here’s what it’s all about. 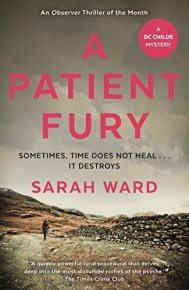 When Detective Constable Connie Childs is dragged from her bed to the fire-wrecked property on Cross Farm Lane she knows as she steps from the car that this house contains death.

Three bodies discovered – a family obliterated – their deaths all seem to point to one conclusion: One mother, one murderer.

But D.C. Childs, determined as ever to discover the truth behind the tragedy, realises it is the fourth body – the one they cannot find – that holds the key to the mystery at Cross Farm Lane.

What Connie Childs fails to spot is that her determination to unmask the real murderer might cost her more than her health – this time she could lose the thing she cares about most: her career.

My, oh my. What a way to meet a new character. This is one humdinger of a case and no mistake. Highly emotional at times but also quite dark in the story telling, if this is typical of the whole series then I cannot wait to go back and catch up.

Just back from leave, DC Connie Childs finds herself called in on a particularly delicate and overwhelmingly sad crime scene – the death of an entire family in a house fire. The hope would be that it was simply an accident, that they had died in their sleep and not suffered in any way. But if that were the case there would be no need for the police, and what is apparent from when they first set foot on the scene, nothing could be further from the truth.

Now I won’t say anything more about the plot than that – you can learn all you need to from the blurb. This is a very emotive story, one which catches all of the detecting team unawares, a tragedy heightened by the loss of a young child. But beyond this, this is a family already steeped in tragedy with a history that cannot fully be explained but is the very reason that Connie does not believe all that first appears to be true. As she investigates this mystery she becomes more convinced that something, aside from the obvious is wrong, and her natural instinct comes to the fore, much to the chagrin of her colleagues, her superiors and the victim’s family.

I really liked Connie. She is not your average Detective Constable. She is determined and feisty, driven by instinct, which seems seldom wrong, and very tenacious. She is a very human character and by that I mean she is as capable of making mistakes, both professional and personal, as the next person, but ultimately they make her even more relatable and likeable. She is more focused on getting to the truth than protecting her career, unlike some of her colleagues, and ultimately, although occasionally going against procedure, it is easy to see why she is such a popular person amongst those who know her. Also why she is infuriating. I’m sure that we all know a Connie.

The pacing in this book is spot on. It does not pass at break neck speed, it’s not that kind of case. In fact as the police believe they have already determined the cause of the fire and the case seems almost open and shut, elements of it feel like going through the motions to keep an outraged community satisfied. And yet, when needs be, the tension ramps up, as does the pacing, bringing about that increase in heart rate, that feeling over nervousness and a high level of apprehension as you fear for the life of one or more of the central characters.

Speaking of characters, Sarah Ward does an excellent job of creating tension through their actions as well as increasing the level of jeopardy. There is a truly varied cast, both police officers and suspects, but I have to say that it is Llewellyn and Julia who stood out the most. Llewellyn has a high level of trust in Connie, something which is great to see, and to see the way he watches over her is actually very endearing. Julia, the daughter of one of the victims, is quite the determined character too. Very much Connie’s match in terms of intelligence and intuition there is an endearing side to her character. As we spend a good proportion of the story hearing her point of view, this is just as well, but Sarah Ward has created a very engaging and honest character that I really liked.

If, like me, you haven’t read any of the Connie Childs series before, then this can be read as a stand alone. There are hints as to things from the other books, but not enough to be off putting, and not enough to stop you from getting to grips with both character and setting. In creating the fictional town of Brampton, the author has captured all of the familiarity of the Derbyshire setting while allowing herself a certain amount of freedom which is used to good effect here. It may even inspire you to go and pay a visit to the Peak District. It’s certainly given me food for thought.

Overall A Patient Fury is a great mystery, full of tragedy, secrets and manipulation and comes highly recommended from me. If you’d like a copy of the book it is available from the following retailers:

Sarah Ward is the author of three DC Childs novels, In Bitter Chill, A Deadly Thaw and A Patient Fury set in the Derbyshire Peak District where she lives. The fourth in the series, The Shrouded Path, is out in September. On her website, Crimepieces (www.crimepieces.com), she reviews the best of current crime fiction published around the world. She is a judge for the Petrona Award for Scandinavian translated crime novels. Sarah was a 2015 Amazon Rising Star and A Patient Fury was The Observer’s Thriller of the Month in 2017. 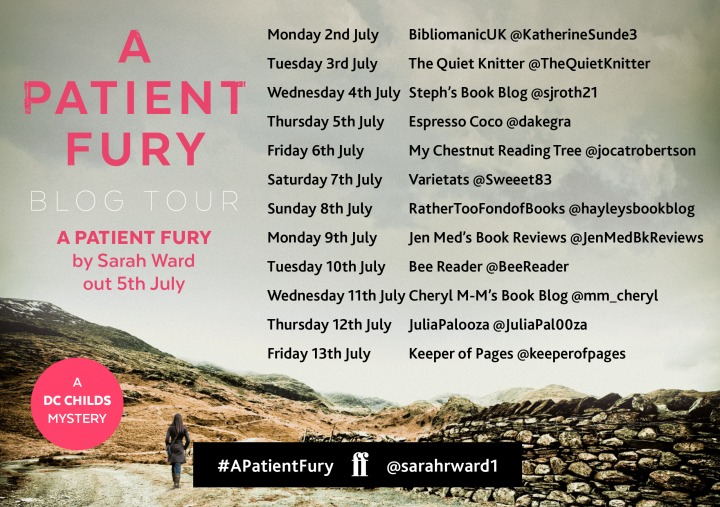