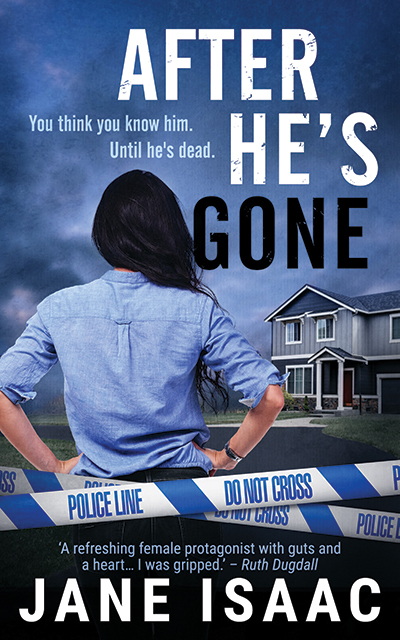 Today it is my great pleasure to be taking part in the blog tour for After He’s Gone, the first in a brand new series from author Jane Isaac featuring Detective Beth Chamberlain. My thanks to the author for inviting me to join the tour and providing an advance copy of the book for review. We’ll take a look at my thoughts as soon as we’ve seen what it’s all about.

You think you know him. Until he’s dead.

When Cameron Swift is gunned down outside his family home, DC Beth Chamberlain is appointed Family Liaison Officer: a dual role that requires her to support the family, and also investigate them.

As the case unfolds and the body count climbs, Beth discovers that nothing is quite as it appears and everyone, it seems, has secrets.

Well this is one book that makes an impact! It opens upon a scene where a family is being held at gunpoint, what we do not know is who the family are and what, if anything they have done. The tension is high, the situation critical … and the reader left on a right cliffhanger as we cut back to the start of the whole affair. Something which, I have to admit, is every bit as dramatic as the scene that precedes it.

This is the first time I have read a book by Jane Isaac but I have to be honest and say that if this is what O can expect from all of the others then it won’t be the last. I enjoyed every minute of this book, tearing through it keen to know just what was going on and who was at the heart of all of the troubles caused. and let me tell you that there are no end of suspects littered throughout the novel. This is a tale where secrets and deception are rife and people are not necessarily all they appear. I don’t want to say much more than that as part of the beauty in reading this book is in uncovering all those bends in the road for yourself.

What I will say is that Jane Isaac has a very engaging and accessible writing style and I found myself immediately warming to the characters she had created, especially the Family Liaison Office, Beth Chamberlain. A large proportion of the story follows her and her involvement in the investigation into the murder of Cameron Swift, so it is essential that the reader bonds with her quickly. Job done. I found her to be an ambitious and yet thoroughly likeable character. Offered her first opportunity to put her FLO training to use, Beth’s easy manner makes her perfect for the role, even if she is there by default rather than design. She is not necessarily a perfect character, her personal life being rather complicated with illicit office romances and a sister who has caused her more than a small amount of grief, but there is something about her that draws the reader in and you are one hundred percent on her side.

The remainder of the story follows two key people in Cameron’s life. Both very individual characters and hard to get to necessarily like in some cases I felt more affinity for one than the other from the start and yet, bearing in mind both are people affected deeply by their loss, my feelings towards the second changed rapidly in the latter parts of the novel. It is one of those books where you will also find your feelings towards the victim changing, often conflicted between their fate and their actions. Was Cameron a really likeable character himself? Well – you’ll need to read to find out.

There was a real sense of setting in this piece, the action set largely in and around Northampton and its various surrounding villages and estates. I know the area a little but and for me Jane Isaac really captured it well, bringing the area to life on the page. This amplified the stark nature of the initial murder, contrasting the horrific shooting against the leafy suburban life that Cameron led with his family.  The author also touches upon certain domestic situations which again are portrayed convincingly, such as the idea of control of husband over wife and the suffocating nature of this kind of relationship without taking it to excess. Very well played.

After the initial high action start to the book, the pacing waxes and wanes, enough to reflect the stages of investigation that the police go through and the awkwardness of Beth’s position as FLO. Really this is a fascinating role, the Detectives assigned to help the family but also to try to uncover any secrets they may be too scared to tell. I really like reading books from an alternative perspective on an investigation and this one was top-notch. As we build to that final dramatic showdown which was promised in the prologue, you can feel the pace pick up again, your pulse quickening to match as Beth draws nearer to the truth. All nail-biting stuff for sure and it kept me on the edge of my seat, if anything my reading speed picking up further as the story developed.

If you are looking for a tense, secret infused murder investigation told from a slightly different perspective and that will keep you on the edge of your seat then definitely give this book a go. You won’t regret it.

After He’s Gone is available now from the following retailers:

Jane Isaac lives with her detective husband (very helpful for research!) and her daughter in rural Northamptonshire, UK where she can often be found trudging over the fields with her Labrador, Bollo. Her debut, An Unfamiliar Murder, was nominated as best mystery in the ‘eFestival of Words Best of the Independent eBook awards 2013.’ The follow up, The Truth Will Out, was nominated as ‘Thriller of the Month – April 2014’ by E-Thriller.com.

This week Mandie paid a visit to Will Carver's The Beresford? Will she ever recover?
Over on the blog I've been sharing my thoughts on Psychopaths Anonymous by the inimitable Will Carver.
This week saw the release of The Midnight Lock by Jeffery Deaver and I shared my thoughts over on the blog.
Today I joined the blog tour for one of my favourite series, the Dempsey/Devlin series by Tony Kent, with a review of No Way To Die.
Today I’ve been sharing my thoughts on Dead Mercy, the latest Maggie Jamieson book from Noelle Holten.
I reviewed something a little different this. week - Mark Tilbury's Poetic Justice.