Oh how I love the Logan McRae series. Well, I love anything written by Stuart MacBride in general if I am being honest, but there is just something about this series which fascinates, thrills, elicits major chuckling and some rather eekish face pulling. It’s really quite fun. I have been looking forward to this book for ages, having had it on pre-order since late 2017 and now it is finally here – the wait is over! Here is what it is all about. 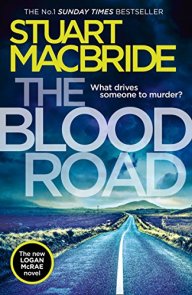 What drives someone to murder?

The No.1 Sunday Times bestselling author returns with the much anticipated new Logan McRae thriller.

When Detective Inspector Bell turns up dead in the driver’s seat of a crashed car it’s a shock to everyone. Because Bell died two years ago, they buried him. Or they thought they did.

As an investigation is launched into Bell’s stabbing, Logan digs into his past. Where has he been all this time? Why did he disappear? And what’s so important that he felt the need to come back from the dead?

But the deeper Logan digs, the more bones he uncovers – and there are people out there who’ll kill to keep those skeletons buried. If Logan can’t stop them, DI Bell won’t be the only one to die…

Now, as much as I love reading Stuart MacBride’s books (and I truly do), the one area I feel less comfortable is in writing a review. Why? Well, see, I never quite feel like I do the books justice. Too much gushing and it seems like I’m some rabid fangirl and I make no sense. Not enough of a push and I struggle to convey just how fab the books are and why you should read them. I really want to just say, read the bloody things – they are flufftastic and should be on everyone’s tbr. But then that’s probably not enough either. I make no bones about the fact I’m a huge fan so I guess you want something more than that to convince you this is worthy of your time.

But oh it is. It really really is. The Blood Road sees us back in the easy, but not quite comfortable company of Logan McRae, put upon hero of so many of Mr MacBride’s masterpieces. He is a character we know well and one we have all grown to love because he is just so … well, just so really. He is a very intelligent, sometimes grumpy, long-suffering, often beat up but never truly beaten, guaranteed to get his man police hero who sets Aberdeen(shire) on the straight and narrow, much to the dismay of some of his colleagues. A strong sense of right and wrong, a very unusual private life and some rather peculiar quirks that he has picked up along the way all make him an absolutely cracking protagonist. To be fair to the guy, after everything he has been through, occasional hallucinations and hearing the voices of dead people seem to be rather mild symptoms and ones he is easily able to cope with. I do love Logan bless him.

Despite having a year away from the limelight, life for the poor chap hasn’t gotten any easier. He is now in the dreaded ‘Professional Standards’ division, meaning most of his colleagues view him with great suspicion. Not something he isn’t already used to to be fair, but at least this time it comes with permanent Inspector pips at his shoulder. It also puts him in pole position for investigating when a colleague turns up dead. A formerly dead colleague that is. Don’t ask.

Well … do actually, because this turn up for the books takes Logan deep into a dark and harrowing case, one that none of them can have foreseen. His investigation is overshadowed by the case of a missing child, something which is distracting all of his colleagues and leaving him with a dubious selection of Detectives to help him in his own quest. Dubious but oh, oh, oh so funny because not only does Logan have his old friend Simon Rennie at his side, bouncing around like an over enthusiastic puppy, but he is handed the assistance of DC ‘Tufty’ Quirrell and his old boss and permanent headache, DS Roberta Steel. Steel still hasn’t forgiven him for his part in her change of status (demotion) and seems hell bent on making his life intolerable, both at work and in private.

Now I love Rennie and Tufty so this was doubly delightful for me, and the constant banter and verbal assaults between Logan and Steel do make me chuckle. The four of them provide so many moments of mirth that it is hard to take their scenes too seriously. Another stand out character for me was the young girl, Rebecca. Another example of how great Stuart MacBride is at developing character. Hard, funny and as frank and opinionated as they come. I loved her. She too added much needed lighter moments to the darkness.

Which is just as well as you do need those moments. There is a very dark subject matter at the heart of this story, one which brings together all the seemingly unconnected threads in a most surprising of ways. It does involve violence against children and there are scenes which will make you wince and perhaps feel uncomfortable, and rightly so. But balance this against the plentiful scenes of mirth, the moments of hilarity such as the scene in the cemetery, so perfectly placed in amongst it all, and it makes a very tough subject more manageable. I don’t for one moment want you to think Stuart MacBride has either glossed over the abhorrent nature of the central story, he is hardly renowned for that now, or that he has trivialized a very harrowing subject by turning it into a farce. Far from it. There is such a delicate line drawn here, a tiny fragment which separates good from bad, light from dark, and yet Stuart MacBride is so adept at blending the line that you can barely tell is it there at all.

Lordy. I wish I could tell you properly just how fab this book is. Yes, there may be moments where hard-core crime fans will not be happy. Steel is, after all, an acquired taste. And perhaps this did have more moments of humour than some of MacBride’s earlier novels but it definitely needed it. All I know is that from the moment I picked this book up I was caught, like a fish on a hook, and reeled straight in. I did not want to put it down and I was gutted when it was over. A brilliant story with truly clever plotting, so much so that while some bits may have appeared to be obvious, other parts still came as a complete surprise.

Pacing is spot on taking reader from quiet moments of personal reflection, to the general hubbub of the police station during the investigation, to moments of high tension and absolute peril for our protagonists. And it had Rennie. And Tufty. Did I mention I love those guys? But especially Logan. He is put through the ringer in this one (again) and no mistake. Poor guy probably needs a holiday. Some where warm and miles away from Steel (although knowing his luck he’d suffer heat stroke and spend most of it laid up …)

But not too long a break. We’re all keen for the next book after all.

My thanks to publishers Harper Collins for the advance copy of The Blood Road for review. It is available from today from the following retailers:

11 thoughts on “The Blood Road by Stuart MacBride @StuartMacBride @HarperCollinsUK”