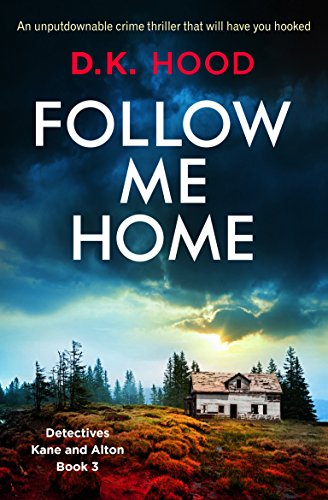 Today it is my great pleasure to join the blog tour for Follow Me Home, the latest Kane and Alton thriller from author DK Hood. My thanks to Noelle Holten from Bookouture for inviting me to join the tour. I’ll be sharing my thoughts in a moment but first up, here is all the important book stuff. 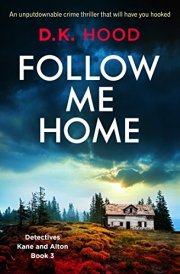 ‘Don’t you agree Detective? That some people deserve to die? I’ve killed the first. I’ve killed the second. Now will you catch the others, or do I have to kill them too?’

The body of Amos Price lies in a pool of blood on the polished floor of an otherwise empty house. With no signs of a break in, and no clues left at the scene, Detective Jenna Alton is at a loss.

But as the team begins to unpick the life of the reclusive victim, they discover a disturbing link between Amos and the disappearance of several young girls in the county going back years.

Days later, another brutally murdered body is found, in a remote motel on the outskirts of town. Ely Dorsey was killed in a frenzied attack and Jenna fears not only that the murders are connected to the missing girls, but that the killer hasn’t finished yet.

As Jenna tries to work out who will be next, the killer suddenly starts sending her deputy, David Kane, messages. Is she being taunted? Or does the murderer want to be caught? And will Jenna discover who’s behind these killings before more people die?

An absolutely nail-biting thriller with plenty of twists, Follow Me Home is perfect for fans of Robert Dugoni, Karin Slaughter and Rachel Abbott.

Wowsers. I am beginning to think that Black Rock Falls may not be a very safe place to live. It certainly has some very deep buried secrets, ones which Sheriff Jenna Alton and her trusty Deputies seem to be unearthing at a great rate of knots. If I lived out there I’d be worried – especially if I was on the wrong side of the law. There seems to be no place to hide, and not just from the law itself.

Follow Me Home is a cracking thriller which pits Alton and her team against a vigilante determined to see justice done. But just who are they are why are they targeting a select group of men? Well, as readers we probably already have a good idea as to the why as the book itself opens on quite a harrowing scene, one where there is no hiding from the core of this story. It is not graphic per se, but there is no doubt in anyone’s mind that this story is about abuse, and a disturbing discovery made by the team after the first murder gives some clue as to the extent of it. I don’t want to say too much more about the story, but needless to say the killer is not done yet and if we want to find out who they are and how far they will go, we will have to go on this journey with them.

I do really enjoy reading the books by DK Hood. The author does a great job of creating setting – the remote nature of the town and the isolation of the mountain lodges in and around which a lot of the action is set. You can almost smell the trees, feel the danger, not just from the murderer, but from nature itself. It all feels pretty authentic. Wouldn’t be a bad place to visit – if it wasn’t for the constant danger which surrounds them. Set in a small mountain community you wouldn’t think they could get in much trouble but you would be very wrong. Given this is book three in the series and the author is working on more, if I was Jenna Alton, I’d be considering a transfer …

You are placed in a very strange position in reading this book, one which is echoed in the story itself and the way in which Jenna and her team react to the murders. On one hand, murder is wrong, no matter the circumstances. On the other, these are chilling and calculated murders, but offset against a background of abuse, can you really feel anything for the victims at all?. You will find yourself, as the Sheriff’s department do, flitting between your feelings about the murders. I know I did. I must admit, it’s a little more fun the other way although a few of the scenes make for uncomfortable reading as we see the victims in their true light.

I love the characters in these books and the way in which DK Hood dances around the clear attraction between Alton and Kane. There is something there although it is not clear as to whether it can ever be more than a very close friendship as they have both been hurt in the past. It does make for a tantalising read though and there are more than a few will they won’t they moments scattered through the book, something always cutting in at the last moment. From a characterisation point of view, although a lot of the story is told from the perspective of the police and the victims, there are scenes set through the mind of the killer and these are quite chilling. Never enough to give you the ultimate clue of who they are, but enough to know they too were once a victim.

Ultimately, this is a thrilling, and sometimes chilling addition to the Alton and Kane series. Gruesome murders and a vigilante killer all set against a story of hidden abuse. This is a difficult subject handled in a very careful way, guaranteed to keep fans of the series on the hook from start to finish.

My thanks to publishers Bookouture for providing an advance copy of the book for review. It is available now from the following retailers:

I’ve always had a wicked sense of humour and was the kid who told the ghost stories around the campfire. I am lucky to have family all over the world and have spent many vacations in places from Paris France to Montana USA and Australia. I use the wonderful memories from these visits to enhance my stories.

My interest in the development of forensic science to solve crime goes back many years. I enjoy writing crime, mystery and thrillers.

With many stories, waiting for me to write I’ll look forward to sharing many spine-tingling stories with you.

D.K. Hood is an active member of International Thriller Writers. 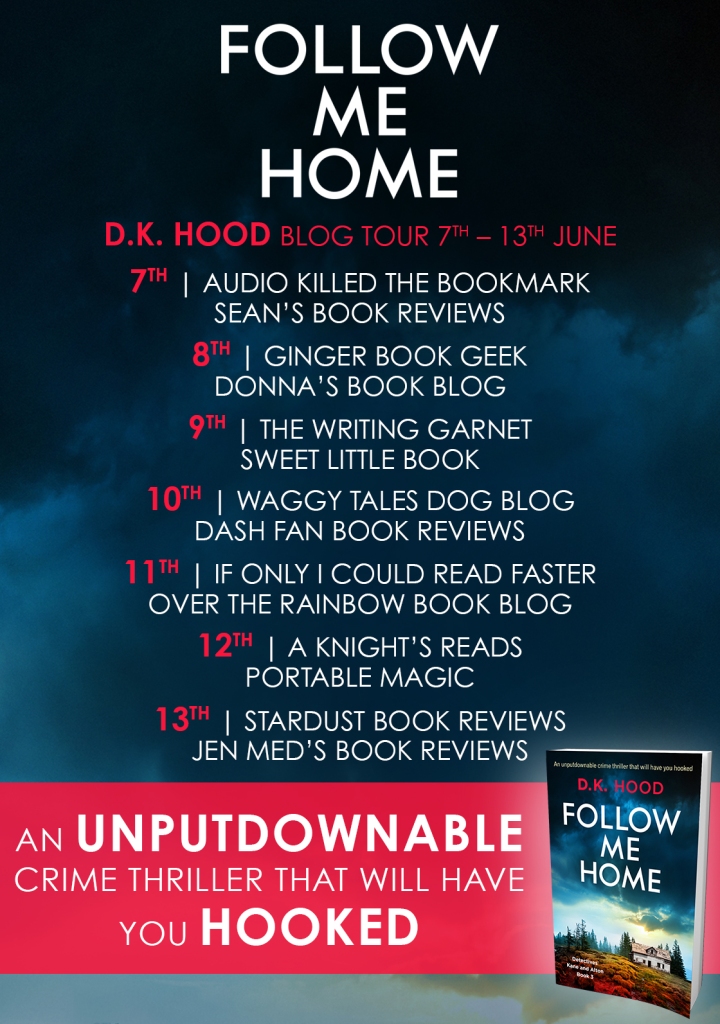 Delightful bit of #bookpost to come home to after a couple of wet and windy days in Edinburgh - @matthews.carole’s #SunnyDaysAndSeaBreezes courtesy of @millieseaward and @littlebrownbookgroup_uk - looks like the perfect mood lifter and antidote to the inclement weather. Jodie Jackson is all at sea, in every sense. On a ferry bound for the Isle of Wight, she's leaving her London life, her career, and her husband behind. She'd like a chance to turn back the clocks, but she'll settle for some peace and quiet on her brother Bill's beautifully renovated houseboat, Sunny Days. But from the moment Jodie steps aboard her new home, it's clear she'll struggle to keep herself to herself. If it isn't Marilyn, who cleans for Bill and is under strict instructions to look after Jodie, then it's Ned, the noisy sculptor on the next-door houseboat. Ned's wood carving is hard on the ears, but it's made up for by the fact that he's rather easy on the eyes. Bustled out of the boat by Marilyn and encouraged to explore with Ned, Jodie soon delights in her newfound freedom. But out of mind isn't out of sight, and when her old life comes knocking Jodie is forced to face reality. Will she answer the call or choose a life filled with Sunny Days and Sea Breezes? #books #booklover #lovebooks #booklove #bookstagram #bookstagrammer #bookblogger #bookblog #bookblogging #bookbloggers #bookworm #booknerd #booksofinstagram #bookbloggersofinstagram
Pink hot chocolate. Obviously
Today on jenmedsbookreviews.com I share my thoughts on #GraceIsGone by Emily Elgar. Inspired by a true story, this is a gripping and suspense laden read. Meg and her daughter Grace are the most beloved family in Ashford, the lynchpin that holds the town together. So when Meg is found brutally murdered and her daughter missing, the community is rocked by the tragedy. Her daughter, Grace, has been sick for years and all Meg has ever done is look after her. Now Meg is dead, Grace is gone - and fears are growing for her life. Who would kidnap a sick teenager? Who would murder a mother who sacrificed everything? As the community come to terms with what's happened, an unlikely pair start searching for answers: Jon, the most hated journalist in Ashford and Cara, the young woman who found Meg's body. But once they start digging into the past, they will soon realise there's no going back. #booklove #lovebooks #books #bookblog #bookblogger #bookblogging #bookstagram #bookstagrammer #bookstagrammers #booksofinstagram #bookbloggersofinstagram #bookworm #booknerd
Fab evening at @toppingsedin listening to #JamesOswald and #TFMuir talk about their books #BuryThemDeep and #DeadStill. I even treated myself to a new book because, you know, rude not to and all that. 😝 #inspectormclean #dcigilchrist #books #booklaunch #bookstagram #bookstagrammer #bookblog #bookblogger #bookblogging #bookbloggers #booknerd #bookworm #notastalker #havethatinwriting
Guess whose review has been quoted in the cover of #DeathDeserved? That’s right - @jacob.collins.18 of #HookedFromPageOne. Oh - and me. Whoop whoop. #covergirl #notlikely #booklove
A massive thank you to @Bookouture for my #notbookpost - it’s only a #SilentScream mug!!! And I really do love #KimStone. Head over to Bookouture’s Facebook page where they’ll be celebrating Kim and @angiemarsons fifth anniversary with a live feed tonight at 7pm! #booklove #lovebooks #lovemugs #booksandcoffee #bookiversary