Today I am delighted to hand back over to Mandie who is going to share her review of a book which was one of my favourite reads of 2017, it not the favourite, The Man Who Died by Antti Tuomainen. IMHO this book is hilarious and I shout its praises to all who will listen. We’ll find out if Mandie agrees just as soon as we’ve had a reminder of what it’s all about. 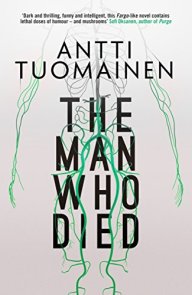 A successful entrepreneur in the mushroom industry, Jaakko Kaunismaa is a man in his prime. At just 37 years of age, he is shocked when his doctor tells him that he’s dying. What is more, the cause is discovered to be prolonged exposure to toxins; in other words, someone has slowly but surely been poisoning him.

Determined to find out who wants him dead, Jaakko embarks on a suspenseful rollercoaster journey full of unusual characters, bizarre situations and unexpected twists.

With a nod to Fargo and the best elements of the Scandinavian noir tradition, The Man Who Died is a page-turning thriller brimming with the blackest comedy surrounding life and death, and love and betrayal, marking a stunning new departure for the King of Helsinki Noir.

So on the face of it a book about mushroom farmers might seem rather dull, but trust me, The Man Who Died is far from that. The title itself almost sounds like it should be a spy novel and I guess it is a kind of whodunit.

If you found out you were going to die due to poisoning, what would you do? Would you accept your fate and just enjoy the life you have left, or would you turn detective and try to find out who had done this to you and why?  Jaakko Kaunismaa decides to do the latter.

Throughout the book you are taken through events through the perspective of Jaakko. He tries to continue to run his business and stave off the competition that has recently started trading close by, whilst trying to discover the people behind the attack on his life. You really do have to admire how he handles everything even down to securing the loyalty of his staff when it becomes apparent that his rivals are trying to poach them.

I have to say I really loved this book. Listening to it on Audiobook I found I was out for over 1 ½ hrs and 15 chapters in before I even thought to check what the time was. I was easily drawn into the life of Jaakko and his work colleagues and was rooting for him to find out not just who but also the why.  Just as he was mentally ticking off the suspects in his head I was doing the same. Despite the fact that it was dealing with the imminent death of someone the story was injected with bouts of humour throughout and as much as I was going ewwww, I was also chuckling.

The book might not be fast paced but there certainly is enough going on to keep you reading to the end. I guess the only question I was left with by then end was about the fate of Viekko the hedgehog.

If you’d like to read the book for yourselves it is available from the following retailers:

One thought on “Guest review: The Man Who Died by Antti Tuomainen @antti_tuomainen @OrendaBooks @mgriffiths163”