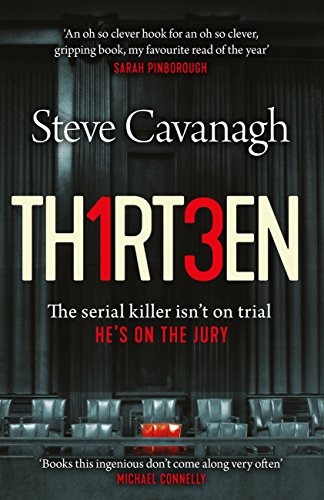 Today it is my great pleasure to be taking part in the blog tour for the latest Eddie Flynn novel from Steve Cavanagh, Thirteen. My thanks to Tracy Fenton and publishers Orion for inviting me to join the tour. Somehow, and don’t ask me how, this is my first Eddie Flynn book but definitely not my last. Let’s take a look at what it’s about shall we? 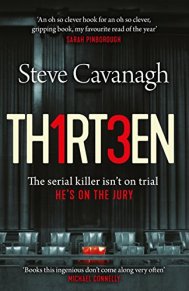 THE SERIAL KILLER ISN’T ON TRIAL.

HE’S ON THE JURY…

‘To your knowledge, is there anything that would preclude you from serving on this jury?’

Murder wasn’t the hard part. It was just the start of the game.

Joshua Kane has been preparing for this moment his whole life. He’s done it before. But this is the big one.

This is the murder trial of the century. And Kane has killed to get the best seat in the house.

But there’s someone on his tail. Someone who suspects that the killer isn’t the man on trial.

Kane knows time is running out – he just needs to get to the conviction without being discovered.

Okay. First up – yes. This is my first Eddie Flynn thriller and now, having completed Thirteen, I am fully ashamed to admit that fact. I actually listened to the audio version of this book for the most part, started while I was on a walk around one of our local Forestry Commission sites and to be honest I probably looked a bit of a loon chuckling as I was at some of the parts of the story, but then I often look like a loon so I can’t exclusively blame Steve Cavanagh for that one …

Thirteen opens with quite a bang, clearly setting the stage for what is to come and introducing the reader (or listener) immediately to the nemesis in this story – Joshua Kane – a cold hard killer. What we do not know yet is his motive or focus, although the blurb above gives you some idea as to what the ultimate game plan is. What you do not see is just how downright brutal and cunning he can be or how far he is willing to go to secure a guilty verdict – for the wrong person. He has a pretty unique signature, aside from the obvious, quite inventive, not entirely unnoticed but thus far unproven.

Now when we first meet Flynn in this book, he is defending a case in court in which he makes a fool of a Detective, using evidence against him without entirely exposing what he knows to be the truth of the case. This could well prove to be a grave error for Flynn, but as to how remains to be seen. You know from the start that it is something that will bite him on the arse, and then that whole sense of jeopardy, waiting for the when rather than the if, just adds to the tension which drips throughout the book. And this really is a tense read believe me.

Well tense and entertaining. A brilliant blend really. I don’t want to go much further into the plot other than to say that Flynn is approached to help defend a very high profile client accused of a murder which he clearly didn’t commit. Unfortunately for him, the evidence is stacked against him and the likelihood of a conviction quite high. So can the truth be uncovered and the real murderer exposed … You’ll have to read the book and find out, won’t you?

I loved the blend of light and dark in this story, the humour balance against what were some pretty gruesome, and some more mundane, murders. to give Kane his dues, the guy is certainly inventive in method and highly skilled, but then you don’t become a successful serial killer by being a doltz. The way in which Cavanagh draws out his character, establishes the heightened intelligence and lack of empathy, is brilliant and contrasts perfectly to the slightly more empathetic character of Flynn. Kane is a formidable opponent, hidden in plain sight, a kind of delicious Hannibal Lecter-esque character, minus the cannibalistic tendencies at least. I really did like him, in as much as you can like a sadistic serial killer anyway.

Flynn is equally as intelligent. although used and presented to the world in an entirely different way. It doesn’t stop him from putting his foot in it and falling foul of the authorities but with his moral compass set well and truly on the side of right, he is a character I grew to like very quickly. He has some good friends around him, but is instilled with an inquisitive and persistent nature, determined to find the truth in all situations, no matter the personal cost. And it really does cost him, physically and emotionally, believe me.

I love the styling of the novel, the way in which Cavanagh has captured the sense of the New York setting. Not only in language but also the tone of the novel itself. This is a legal thriller, but not in the stuffed shirt, corporate justice kind of a way. There is as much action as there is legalese and with Flynn being such an likeable character, it makes the scenes set in the courtroom more accessible for the reader too. The way in which Flynn’s easy confidence and down to earth attitude contrast to the slick Corporate lawyer he is working for or the big ego prosecutor he is working against, is written perfectly, really enriching the reading experience for me.

The story is split between Flynn’s point of view and that of Kane. Being privy to Kane’s inner thoughts and feelings, or lack thereof, doesn’t make him a more sympathetic character but it does add to the chilling nature of the story. I don’t think this would work half as well told in third person as to understand the very nature of the man, the killer, you really do need to be inside his head. He has a very unique condition, other than simply sociopathic and psychopathic tendencies, and while this could seem a stretch in terms of believability, it actually just makes him all the more chilling. I must admit I had to listen to one part twice as I couldn’t believe what I was hearing. It certainly produced a bit of a grimace as there are parts which are a trifle stomach churning.

I feel like I’m making a right royal horlicks of this review as all I really want to say is read it. Fast paced and totally entertaining, for all the right AND wrong reasons, I absolutely loved it. Such an ingenious idea and so well executed that even if you haven’t read any of the other books I’d urge you to take a look at his one. I’ve since gone back and bought the first books in the series and can’t wait to read them. If they are anything like as good as this one I’m in for one heck of a treat. 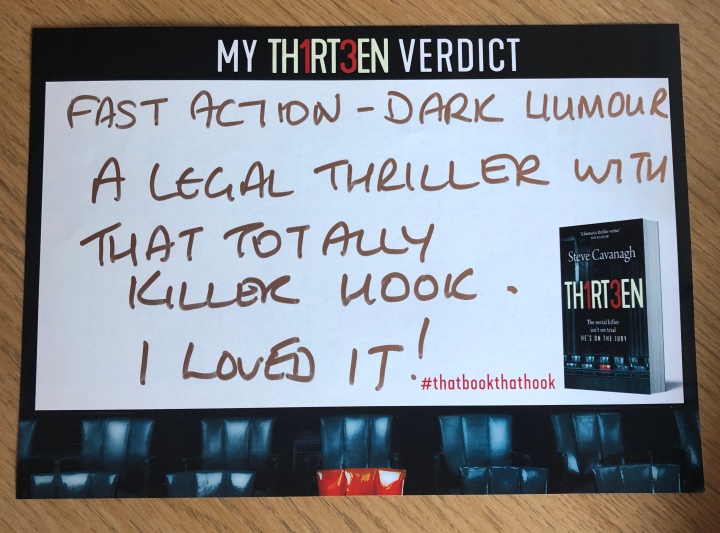 Thirteen is available now from the following retailers:

Steve Cavanagh is a critically acclaimed, award-winning author and lawyer. He is also one half of the Two Crime Writers and a Microphone podcast. His latest novel, Thirteen, is out in ebook now and paperback in June.