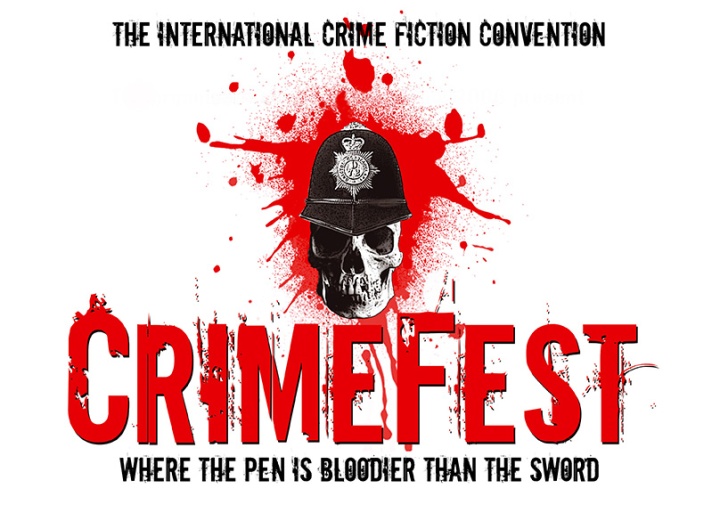 So I’m back again with another four short reviews from the CrimeFest anthology, Ten Year Stretch. Celebrating ten years of the Bristol based crime writing conference, this collection features some of the top crime writers of present times. I was lucky enough to be sent an early sneak peek copy by publishers No Exit Press and I’ve working my way through one fabulous story at a time. let’s see what it’s all about. 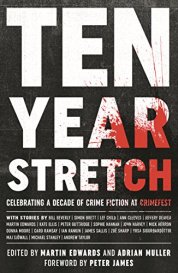 Twenty superb new crime stories have been commissioned specially to celebrate the tenth anniversary of Crimefest, described by The Guardian as ‘one of the fifty best festivals in the world’.

A star-studded international group of authors has come together in crime writing harmony to provide a killer cocktail for noir fans; salutary tales of gangster etiquette and pitfalls, clever takes on the locked-room genre, chilling wrong-footers from the deceptively peaceful suburbs, intriguing accounts of tables being turned on hapless private eyes, delicious slices of jet black nordic noir, culminating in a stunning example of bleak amorality from crime writing doyenne Maj Sjowall.

The foreword is by international bestselling thriller writer Peter James. The editors are Martin Edwards, responsible for many award-winning anthologies, and Adrian Muller, CrimeFest co-founder.

All Royalties are donated to the RNIB Talking Books Library.

How Many Cats Have You Killed – Mick Herron

Mick Herron’s novels include the Gold and Steel Dagger-winning Slough House series, about a bunch of messed-up spies. His work has been nominated for the Theakston, Macavity, Barry and Shamus awards, and Real Tigers won the 2017 CrimeFest Last Laugh Award. His latest book is London Rules. He lives in Oxford and writes full-time.

Another brilliantly funny look at crime fiction/crime faction. Rooted in reality, sort of, this is a highly witty exploration of all it means to be a spy novelist in modern day Great Britain. Move over MI5 – Mick Herron’s super secret spy credentials will leave you standing.

Donna Moore is the author of Go to Helena Handbasket – a spoof PI novel which won the Lefty Award for humorous crime fiction in 2007 – and Old Dogs – a caper novel set in Glasgow (nominated for both Last Laugh and Lefty Awards). Her short fiction has been published in various anthologies. She works at Glasgow Women’s Library and is currently studying for a PhD in Creative Writing at the University of Stirling.

What would you do if a relative you had been told was dead suddenly came to live with you and your husband. And what if said relative just happened to have a criminal record for breaking and entering and possession of a cheese sandwich. This is exactly what happens to poor, put-upon housewife Polly in Donna Moore’s fun and quirky short.

A series of events lead Polly into quite the sticky situation, allows her a certain revenge on her overbearing an quite honestly dickish husband and gives the reader a good few giggles too. What a pair Polly and father-in-law Colin make.

Caro Ramsay’s first novel Absolution was shortlisted for the CWA New Blood Dagger; her second, Singing to the Dead, was longlisted for the Theakston crime novel of the year. The tenth book in the Anderson and Costello series will be published in 2018. She has a diploma in forensic medical science and edited The Killer Cookbook for the Million for a Morgue campaign, which led to her having an embalming tank named after her.

Have you ever been the victim of that affliction known as ‘youngest child syndrome’. The one where your older, ‘better’ sister gets all the new stuff and you live on perpetual hand me downs. As the youngest of four (although in fairness I avoided most of my brother’s clothes) this is something I understand well.

In this brilliantly observed short, you witness a child’s imagination as she indulges in a little fantasy life a’la ‘The Famous Five’ living her own adventure in spite of certain limitations she may experience. But the story also shows that age is no substitute for or guarantee of wisdom.

Inside the Box – Ian Rankin

Ian Rankin is the creator of John Rebus and has also written stand-alone novels. He has received four CWA Daggers, including the Diamond Dagger, as well as an Edgar, and awards in Denmark, France and Germany. He lives in Edinburgh.

After a year off, it is so nice to be back in the company of Rebus. Reunited with some old pals at a retirement party, talk turns to an old colleague and a cold case which was never solved – a jewelry store heist.

Rebus being Reubs, a simple comment is enough to spark the makings of an idea and ine this brilliant scripted short he proves, once more, why he is Edinburgh’s number one (retired) Detective. Loved it. Roll on October as I can’t wait for the next full length Rebus read. I can (exceptionally) late to this series, but I am making up for lost time…

I’ll be sharing more of my thoughts on the rest of the stories over the next couple of days. In the meantime, if you’d like to pick up a copy and read for yourself you can find it at the following retailers:

Three days to go until Crimefest. It really is a brilliant festival, perfect for fans of the genre, readers, writers (and aspiring) alike and you can find out more about it right here.