Delighted to be able to share this latest press release from Bloody Scotland. Only one month until the programme launch and I cannot wait …

Bloody Scotland International Crime Writing Festival is delighted to announce that it will be marking the launch of the 2018 programme in the presence of the writer of one of Scotland’s best loved crime series, Alexander McCall Smith.

The official programme launch on Monday 4 June will be followed by afternoon tea in the Ballroom of The Golden Lion Hotel in Stirling as Alexander McCall Smith celebrates the 20th anniversary of The No.1 Ladies’ Detective Agency.

‘From the first Bloody Scotland festival in 2012, we have tried to get the wonderful Alexander McCall Smith on the programme but sadly his schedule and ours have never been in sync. Until now’

‘I can’t think of any better way to celebrate 20 years of The No.1 Ladies’ Detective Agency than with afternoon tea at the launch of Scotland’s biggest crime book festival. I have always wanted to appear at Bloody Scotland & am glad we have managed to make it work as I’ll be in Botswana when the actual festival takes place.’

Not only will Bloody Scotland announce the line up for the 2018 festival, it will toast a milestone anniversary for one of Scotland’s greatest crime writers. Incredibly, it is 20 years since The No.1 Ladies’ Detective Agency was first published, introducing Precious Ramotswe to captivated audiences around the world. In the two decades since, Mma Ramotswe- along with Grace Makutsi and the excellent mechanic, Mr J L B Matekoni – have entertained us in a further 17 novels from Botswana. Their creator is as captivating as his characters.

Tickets will be available from http://culturestirling.org/events/alexander-mccall-smith/ or from the Albert Halls or The Toll Booth in Stirling. Free standby tickets are available to the unemployed or those on a low income on the day of the event if there is good availability. Proof of eligibility is required and tickets are limited to one person. A 10% discount is available to people residing in the Stirling Council area. You must give your address at the time of booking.

Bloody Scotland is Scotland’s International Crime Writing Festival, unique in that it was set up by a group of Scottish crime writers – Alex Gray and Lin Anderson, later joined by Gordon Brown and Craig Robertson – in 2012. This year it will take place in Stirling from 21-23 September 2018. Full information at www.bloodyscotland.com

The 2018 programme will be launched on Monday 4 June in Stirling and Tuesday 5 June in London. Afternoon Tea with Alexander McCall Smith in The Regency Ballroom at The Golden Lion Hotel in Stirling will cost £5 on Monday 4 June at 1pm (to include tea and shortbread). Tickets available from usual outlets 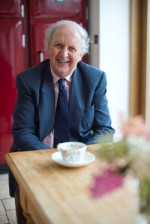 The first edition of The No.1 Ladies’ Detective Agency was published by Edinburgh based publisher, Polygon, and they continue to publish Alexander McCall Smith. Polygon is an imprint of Birlinn who in November were named Scottish Publisher of the Year.

Bloody Scotland prides itself on offering a discount for local residents, tickets for the unemployed and a mini bus between venues for those that need it during the Festival itself

The judges of the 2018 McIlvanney Prize which is awarded at the opening night of the Festival were recently confirmed as Susan Calman, comedian and self-confessed crime fiction fan; Alison Flood, the Guardian’s books reporter and former news editor of The Bookseller and Craig Sisterson  who will be Chair. Recent winners of the Scottish Crime Book of the Year Award include Denise Mina (2017) and Chris Brookmyre (2016).