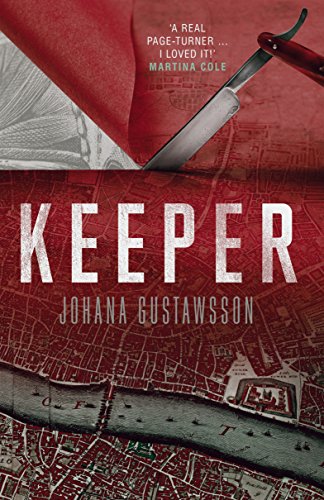 It is my absolute pleasure to be joining the blog tour for Keeper by Johana Gustawsson, the follow up to her brilliant novel, Block 46. That was one of my top reads of 2017 and although it is only April, I know that Keeper is going to be on my list for 2018 too. My thanks to Anne Cater of Random Things Tours for inviting me to join the tour. This was one I could in no way say no to. Let’s take a look what it is all about shall we. 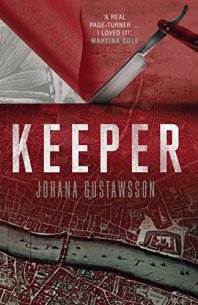 Whitechapel, 1888: London is bowed under Jack the Ripper’s reign of terror.

London, 2015: actress Julianne Bell is abducted in a case similar to the terrible Tower Hamlets murders of some ten years earlier, and harking back to the Ripper killings of a century before.

Falkenberg, Sweden, 2015: a woman’s body is found mutilated in a forest, her wounds identical to those of the Tower Hamlets victims. With the man arrested for the Tower Hamlets crimes already locked up, do the new killings mean he has a dangerous accomplice, or is a copy-cat serial killer on the loose?

Profiler Emily Roy and true-crime writer Alexis Castells again find themselves drawn into an intriguing case, with personal links that turn their world upside down. Following the highly acclaimed Block 46 and guaranteed to disturb and enthrall, Keeper is a breathless thriller from the new queen of French Noir.

Come on now. Let’s all be honest. Is there a real life serial killer more fascinating than the legendary Jack The Ripper? I’ve heard the rumours, read the alleged ‘secret diary’. All extraordinary stuff. A man (or at least a person of unconfirmed gender) who held London in their thrall and whose identity has never really been confirmed, although there has been much speculation. It is a sad and vicious story and the victims were part of a disposable Victorian societal class, but their murders were gruesome and he/she/it was cold and calculating, taunting the police through a series of letters and macabre clues sent to the press. It really is quite the story. And so when I heard that these murders and Jack’s reign of terror would form the historical backdrop for Keeper I was already intrigued. I mean, how do you weave a true and thus unsolved crime such a this into a modern day murder mystery?

With absolute bloody class and skill, that’s how. Take a bow Ms Gustawsson as with Keeper you have created a murder mystery that is grotesque and shocking and so completely beautifully scripted that the surprises kept coming from first page to last. I bloody loved it. Have I said bloody too much there? Well tough, because if you turn the pages of this book then that is what you are going to face a whole lot of, and not just at the hands of bad old Jack. If you thought that what happened to Emily Roy in Block 46 was bad, then you have seen nothing yet as the victims in this book suffer a far worse fate believe me. I can categorically say that this book will in no way win, or qualify for, the Staunch prize and it is all the better for that fact.

This time around, profiler Emily Roy is called to consult on a case of a woman found murdered and mutilated at a remote lake in Sweden. The scene is most heinous and bears striking similarities to case from the UK, one which the police thought they had solved and one which has serious personal connections to Emily’s friend, Alexis Castells. At the same time, the police in the UK, with Emily’s help, are also investigating the abduction of a famous actress, whose disappearance also seems to link to this old case. It is most perplexing and at times disturbing and yet, despite all of the horror that the investigators face, as a reader I was well and truly hooked. I blasted through this in a single afternoon as once I had started there was no way that I intended to stop reading until I had reached the end.

I don’t want to go too much more into the story other than to say that interwoven between the chapters detailing the two contemporary investigations are chapters taking us back to Victorian England, where a young woman, Freda, befriends Elizabeth ‘Liz’ Stride, one of the Rippers soon to be victims. We see Freda’s story evolve, from her friendship with Liz to her slow and sad demise, at which point we follow the fortunes of her daughter, Jenny. How this tale plays out and how it connects to what is happening today you will have to read to understand but believe me it is genius. The reimagining of Victorian England is so skilfully done that you feel a part of the terror, the smog, the oppressive conditions, under which the Londoners had to survive. And the transition back and forth between the two eras is almost seamless. Expertly done as always.

As ever the characters of Alexis and Emily really serve to pull the narrative together. Alexis is heavily impacted by events in this book, bring the story back to explain more of  her history, something which begins to affect her personal relationships. I really enjoy the development of the pairing of Emily and Alexis. They are both extremely likeable characters, though withEmily driven more by duty than emotion, her clinical analysis being what makes her such a great profiler. That is not to say that she does not have a compassionate side and this is seen in her interactions with the young daughter of one of the other detectives.

Beyond the pairing of Castells and Roy, the reader is reunited with the team in Sweden, namely Bergström and Olofsson, but this time they are joined by another Detective, Karla Hansen, who is herself as formidable as Emily Roy. They are complimented by new girl Alienor Lindbergh who is a civilian employee who suffers from Aspergers syndrome and is as intelligent as Emily but perhaps even more stunted in emotional characteristics. She has a highly analytical mind which compliments the team and it is a real joy to watch them all work together to solve this most complex of cases.

It is so very hard to say all that I want to say about this book without the possibility of spoilers. The pacing is spot on, the narrative perfectly tight with not an ounce of wasted language, and I have to compliment translator Maxim Jakubowski as he has ensured that we have a brilliant work of art unfurling before our eyes, capturing a true essence of both the author and the story.

As for the premise of the novel, it is a truly intriguing read, exploring once again the darker side of human nature. Ms Gustawsson has managed to capture the darkness perfectly, the atmospheric nature of the read making it both uncomfortable and compelling in equal measure. It will make your skin crawl, it will make your stomach churn and it will certainly make you grimace, but all of this will be achieved without the novel descending into the unnecessarily graphic. Macabre, yes certainly, even quite violent in its own way, and yet it is a story which you will be unable to turn away from. Maybe it is morbid curiosity, much like that moment when you half hide behind a pillow when watching a horror movie. Whatever the reason, I was hooked from the beginning and would absolutely recommend this book to anyone who loves their crime on the darker side. Beautifully lyrical language depicting murder most foul, but in a story which will stay with you long after you turn the final page for all the very best reasons,

Loved it. So much so I’m giving it one of these – my Red Hot Reads badges.

Keeper is available now in ebook and from 28th April in paperback and can be purchased from the following retailers:

Born in 1978 in Marseille and with a degree in political science, Johana Gustawsson has worked as a journalist for the French press and television. She married a Swede and now lives in London. She was the co-author of a bestseller, On se retrouvera, published by Fayard Noir in France, whose television adaptation drew over 7 million viewers in June 2015. Keeper is the second book book in the Roy & Castells series. 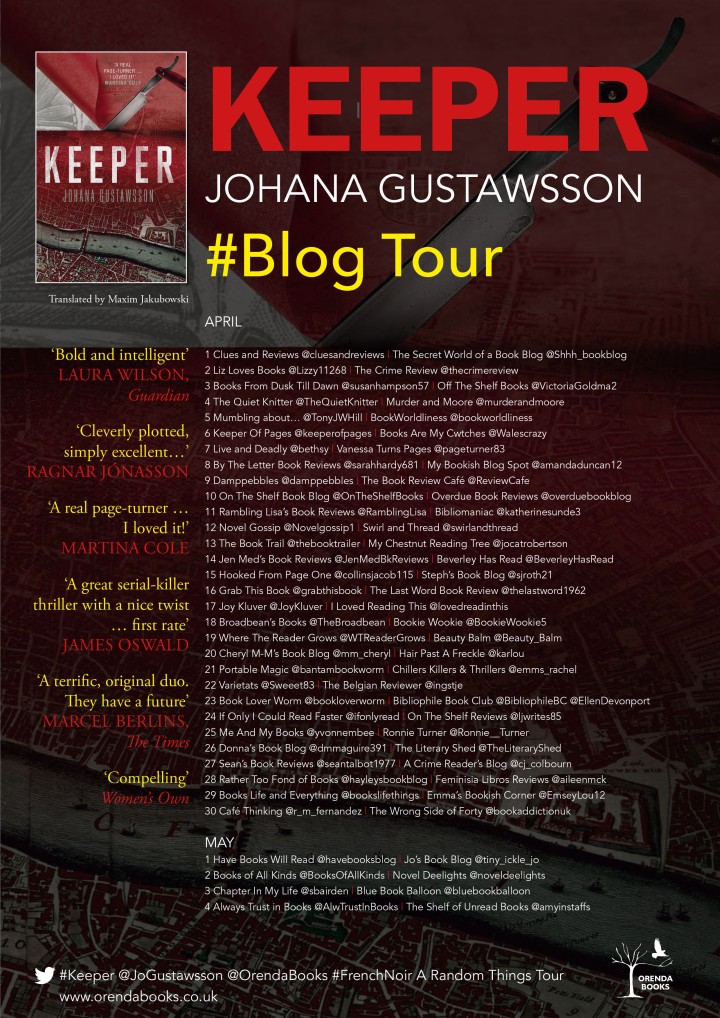