Today it’s my great pleasure to bring you an extract from MJ Ford’s Hold My Hand. Thanks to Sabah Khan at Avon for inviting me to join the tour. First, let’s take a look at what the book is all about.

How long do you hunt for the missing?

When a young Josie Masters sees a boy wearing a red football shirt, Dylan Jones, being taken by a clown at a carnival, she tries to alert the crowds. But it’s too late. Dylan has disappeared…

Thirty years later, Josie is working as a police officer in Bath. The remains of the body of a child have been found – complete with tatters of a torn red football shirt. Is it the boy she saw vanish in the clutches of the clown? Or is it someone else altogether?

And then another child disappears…

She greeted the front desk clerk and several other uniforms on the way to the CID room. DC Kevin Carter was playing some sort of golf game on his computer, which he promptly closed when Jo cleared her throat. The guy really was fifty years’ worth of useless flesh, with two failed marriages and three kids he rarely saw. She’d actually come across his profile on Tinder about two months back, and going by the age of the picture he’d used, she could have done him for fraud.

‘Anything on when the pool was put in?’ she asked.

‘Not yet,’ said Carter. She saw him start the game up again with his mouse.

DCI Bridges was back in his office, on the phone, and a stack of papers lay in front of him. Jo wondered if her results were in the pile. It had been a fortnight since she’d undergone the half-day assessment for a Detective Inspector position, and she knew she’d done pretty well in the role play and interview board sections. It would likely come down to the written test result, and that was harder to judge. Bridges maybe knew already, and was just waiting for the right moment to tell her.

Jo checked her emails. Some phone records had come through in relation to a drug-trafficking investigation they were doing in Snow Hill, as well as a few CCTV files on a burglary carried out on a machine-hire warehouse out west. She saw someone called Heidi Tan from Thames Valley had already started forwarding her the entire contents of the Dylan Jones file in batches of scans, and added her to the distribution list on the case. Efficient.

If that’s grabbed your attention then you can get your own hands on a copy of Hold My Hand from the following retailers:

M. J. Ford lives with his wife and family on the edge of the Peak District in the north of England. He has worked as an editor and writer of children’s fiction for many years. Hold My Hand is his first novel for adults. 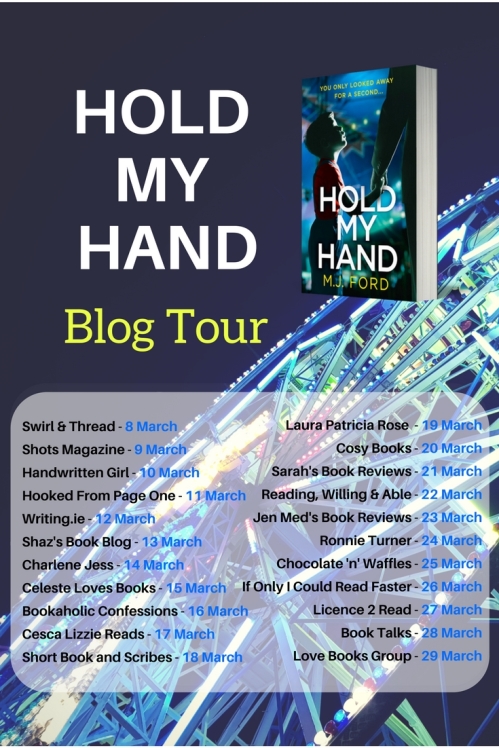 Today on the blog, @mandie163.mg shares her thoughts on Longstone by @ljross_author.
Busy month but quite impressed to have read 15 books and one short story collection.
Today @mandie163.mg shares her thoughts on Fatal Isles by Maria Adolfsson.
This week @mandie163.mg shared her thoughts on the fourth Lori Anderson novel by @crimethrillgirl, Deep Dark Night.
This week on the blog I reviewed Innocent by @erinkinsleyauthor
Absolutely delighted to join the #coverreveal for the brand new standalone thriller from Daniel Cole - author of the brilliant Ragdoll series. I loved those books so really excited to see what he has to offer is with #Mimic - being published by @TrapezeBooks on 19th August 2021.