Today I hand the blog over to Mandie who has recently read and reviewed a series of short stories by Denzyl Meyrick. 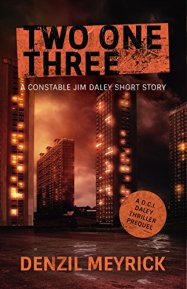 Glasgow, 1986. Only a few months into his new job, Constable Jim Daley is walking the beat. When he is called to investigate a break-in, he finds a young woman lying dead in her squalid flat. But how and why did she die? In a race against time, Daley is seconded to the CID to help catch a serial killer, under the guidance of his new friend DC Brian Scott. But the police are not the only ones looking for the killer . . . Jim Daley tackles his first serious crime on the mean streets of Glasgow, in an investigation that will change his life for ever. This is a stunning eBook only prequel to Denzil Meyrick’s critically acclaimed, best-selling DCI Jim Daley series.

In Two One Three we meet Jim Daley while he is still a probationary PC. Seconded to CID to help solve the murder of a young girl and catch a serial killer this is where he meets some of the characters that remain during his career. This is one of many short stories by the author and it gives you an insight to where it all began.

Daley is keen to make a good impression with his superiors but there are those within the force that are not so keen to see the young PC rise and do well. Set in the mid 80’s in Glasgow you get a feel for how things were back then. A great short read and a wonderful introduction to the world of DCI Jim Daley.

It’s 1989, and Jim Daley is now a fully-fledged detective constable, working in the heart of Glasgow. When ruthless gangster James Machie’s accountant, known as the Magician, is found stabbed to death in a multi-storey car park it’s clear all is not well within Machie’s organisation.

Meanwhile Daley’s friend and colleague DC Brian Scott has been having some problems of his own. To save his job, Scott is persuaded to revisit his past in an attempt to uncover the identity of a corrupt police officer. But there’s a problem. To do so, he must confront Machie and his cohorts. Brian Scott is soon embroiled in a deadly game of cat and mouse with his childhood friends.

As Daley seeks out his old mentor, Ian Burns, to help save his friend and find out who is telling the truth, it becomes a desperate race against time.

This is the 3rd short story by Denzil Meyrick that I have read but is probably the first one I should have read and I have to say I am thoroughly enjoying them. The story is set in the early years of DCI Daley’s career whilst he was still only a detective Constable in CID. The discovery of a dead body of a known associate of a local crime gang sets off a chain of events that sees one of his colleagues put in danger. Calling on the perspective of his old boss can he save his colleague and get to the bottom of what is really going on? I have to say some short stories have often left me disappointed or wanting them to be longer but the author has managed to pitch this just about right and I now look forward to reading more about DCI Daley.

A new DCI Daley short story from bestselling Scottish crime author Denzil Meyrick. ; When a body is found in a whisky barrel, buried on Dalintober beach, it appears that a notorious local crime, committed over a century ago, has finally been solved. D.C.I. Daley discovers that, despite the passage of time, the legacy of the murder still resonates within the community, and as he tries to make sense of the case, the tortured screams of a man who died long ago echo across Kinloch.

This is another great short story about DCI Daley and his team for fans of Denzil Meyrick and if you have yet to discover his books then this would be a great introduction to the characters. This time they have to solve the mystery of a body in a whisky barrel. Dealing with family rivalries that have continued for many years the investigation is not an easy one. During the investigations the team discover that what happened in the past may not be what everyone has believed all this time. I have to say that I absolutely love the short stories and would recommend them to anyone. I look forward to reading all the books in the DCI Daley series as you can’t help but chuckle along with some of the characters. 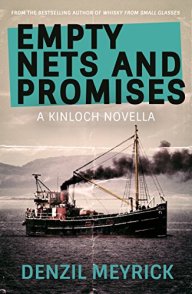 It’s July 1968, and redoubtable fishing-boat skipper Sandy Hoynes has his daughter’s wedding to pay for – but where are all the fish? He and the crew of the Girl Maggie come to the conclusion that a new-fangled supersonic jet which is being tested in the skies over Kinloch is scaring off the herring.

First mate Hamish, who we first met in the D.C.I. Daley novels, comes up with a cunning plan to bring the laws of nature back into balance. But as the wily crew go about their work, little do they know that they face the forces of law and order in the shape of a vindictive Fishery Officer, an Exciseman who suspects Hoynes of smuggling illicit whisky, and the local police sergeant who is about to become Hoynes’ new son-in-law.

Meyrick takes us back to the halcyon days of light-hearted Scottish fiction, following in the footsteps of Compton Mackenzie and Neil Munro, with hilarious encounters involving ghostly pipers, the US Navy and even some Russian trawlerman.

Empty Nets and Promises is a stand-alone book that tells of a fisherman trying to make ends meet in the late 60’s whilst preparing for his daughter’s wedding. There is humour along the way and some fun misunderstandings. I found myself chuckling that at times as I had to re-read passages due to the author writing as they speak so it took me a little while to understand it. Once I did though I flew through the book. An enjoyable short story with old feuds and folklore thrown in that is not part of the DCI Daley story.